Now I am offered to keep or switch envelopes.

It seems that I should always switch envelopes. My two questions:

Is this reasoning correct?

Is it any different if I am not allowed to open the envelope and see the $y$ amount of money, and then I am given the option to switch indefinitely?

Here is an "expected utility maximization/ game theoretic" approach to the matter (with a dash of set-theoretic probability). In such a framework, the answers appear clear.

We are told in absolute honesty that, for $x$ a strictly positive monetary amount, the following two tickets were placed in a box : $\{A=x, B= 2x\}$ with assigned identification number $1$ and $\{A=2x, B= x\}$ with assigned identification number $0$. Then a draw from a Bernoulli $(p=0.5)$ random variable was executed, and based on the result and the event that has occurred, the amounts $x$ and $2x$ were placed in envelopes $A$ and $B$. We are not told what the value of $x$ is, or what amount went to which envelope.

First CASE: Choose an envelope with the option to switch without opening it

The first issue is how do we choose an envelope? This has to do with preferences. So assume that we are expected utility maximizers, with utility function $u()$.

We can model the probabilistic structure here by considering two dichotomous random variables, $A$ and $B$ representing the envelopes, and the amount in them. The support of each is $\{x, 2x\}$. But they are not independent. So we have to start with the joint distribution. In table form, the joint distribution, and the corresponding marginal distributions are

This tells us that $A$ and $B$ have identical marginal distributions.

But this means that it doesn't matter how we choose envelopes, because we will always get the same expected utility,

What we are facing here is a compound gamble (how to choose an envelope) over two identical gambles (each envelope). We can choose $A$ with probability $1$, $0$, or anything in-between (and complementarily for $B$). It doesn't matter. We will always get the same expected utility. Note that our attitude towards risk doesn't play a role here.

So we do choose an envelope, say $A$, and we are looking at it. What is now our expected utility? Exactly the same as prior to choosing. Picking an envelope in whatever way, does not affect the probabilities of what's inside.

We are allowed to switch. Say we do, and now we are holding envelope $B$. What is now are expected utility? Exactly the same as before.

So here, we are indifferent to switching., and in fact we could also randomize.

2nd CASE: OPENING THE ENVELOPE with the option to switch after

Let's see. I wonder, what is

Well, $\{x, 2x\}$ is the sample space on which random variable $A$ is defined. Conditioning on the whole sample space, i.e. on the trivial sigma-algebra, does not affect neither the probabilities, nor the expected values. It is as though we wonder "what is the value of $A$ if we know that all possible values may have been realized?" No effective knowledge has been gained, so we are still at the original probabilistic structure.

But I also wonder, what is

The conditioning statement, properly viewed as a sigma-algebra generated by the event $\big \{A \in \{x, 2x\}\big\}$, is the whole product sample space on which the random vector $(A,B)$ has been defined. From the table of the joint distribution above, we can see that the probability allocation of the joint is equivalent a.s to the probability allocation of the marginals (the "almost surely" qualification due to the presence of two events of measure zero). So here too we essentially condition the probabilities for $B$ on its whole sample space. It follows that our action to open the envelope did not affect the probabilistic structure for $B$ also.

Enter game theory, alongside decision making. We have opened the envelope, and we have to decide whether we will switch or not. If we don't switch we get utility $u(y)$. If we switch, then we are in the following two possible states of the world

We do not know which state actually holds, but per the above discussion, we do know that each has probability $p=0.5$ of existing.

We can model this as a game where our opponent is "nature" and where we know that nature plays with certainty a randomized strategy: with $p=0.5$ $y=x$ and with $p=0.5$, $y=2x$. But we also now that if we do not switch, our payoff is certain. So here is our game in normal form, with our payoffs:

Now all the payoffs in the matrix are known. Is there a pure dominant strategy?

The expected payoff of strategy "Switch" is

The expected payoff of strategy "Don't Switch" is

We should switch if

And now, attitude towards risk becomes critical. It is not difficult to deduce that under risk-taking and risk neutral behavior, we should Switch.

As regards risk-averse behavior, I find an elegant result:

For "less concave" (strictly above) utility functions than logarithmic (say, square root), then we should still Switch.

For logarithmic utility $u(y) = \ln y$, we are indifferent between switching or not.

For "more concave" than (strictly below) logarithmic utility functions, we should not Switch.

I close with the diagram of the logarithmic case 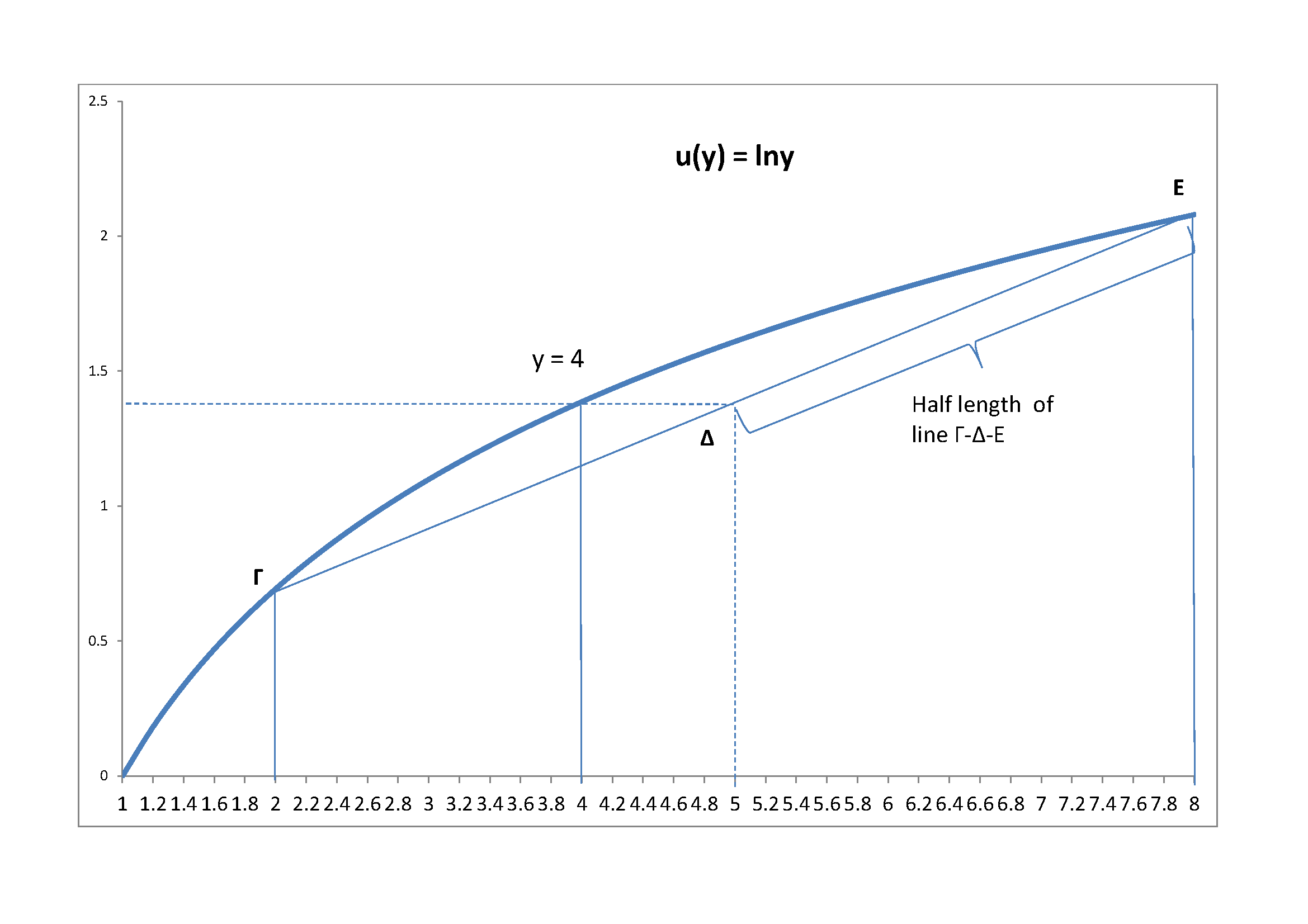 Generally the problem is unsolvable because you haven't specified the randomization procedure of the whole experiment.

But let Y be the value of the envelope you picked, and X the other envelope. The answer is then $E[X|Y=y]$ - which is a conditional expectation . However, assuming a most general distribution of Y, Y is uniformly drawn from all of $\mathbb{R}$. But then $Pr(Y=y)=0$, and by the Borel–Kolmogorov paradox the expectation is unsolvable.

"Is this reasoning correct" No.

The reason why this reasoning is incorrect is that the expected value here depends on the probabilities that envelope 2 contains $2x$ or $x/2$. You have assumed that this is 50/50, but this cannot possibly be the case for all $x$.

The error is assuming that Pr(E2=Y/2) = Pr(E2=2Y) = 1/2 regardless of what Y is. A simplistic way to show this, is to assume that each envelope contains US paper money of various denominations. If Y=$1, then it is impossible for E2 to be Y/2.

A more rigorous proof is too detailed to provide here, but a summary of it is to first assume that, for any value Z, that Pr(Z/2<=E2< Z)=Pr(Z<=E2<2Z). This is essentially the same assumption as in the last paragraph, expanded to a range of values. But if this is true for any value of Z, it means Pr(Z*2^(N-1)<=E2< Z*2^(N-1)) is constant for every value of N, from -inf to inf. Since that is impossible, the assumption can't be correct.

Note that this instance - that is, knowing that you found 20, and not 10 or 40, fits the conditions you describe in your question. So your solution works. But the experiment itself does not fit that description. If you had found 10, or if you had found 40, the probability other envelope has 20 is 100%. The expected gains are +10, and -20, respectively. And if you average the three possible gains over the probabilities you would get the three values, you get 10/4 + 5/2 - 20/4 = 0.

Not the answer you're looking for? Browse other questions tagged microeconomics expected-utility or ask your own question.