The price of oil fell again today and is now below $30/barrel for the first time in 12 years. Along with the fall came most of the US stock markets. If I didn't know any other information except for "the price of oil fell today", my gut reaction would be that the oil companies stock would fall, but the rest of the markets would rise (on average) due to the lower operations cost (and/or increased consumer spending) leading to an increase in profits. This should be especially true for the transportation industry, such as airlines, which consume a lot of gasoline. Yet, in the sharpest decline of the oil price in the past month, airline stock prices have dropped as well. Is my gut feeling incorrect, or is it being overpowered by a stronger force than the price of oil?

Update: Not long after I asked this question I did some more research on it and came to the conclusion that the premises for this question were wrong. I had been basing my question on what I had regularly been hearing/reading in the news, which was something similar to "stocks fell again today due to oil taking another dive". I added an answer which shows my conclusions. (I don't like to accept my own answer to my questions, so as of yet I've left it open.)

First of all, the fall in prices does not only concern oil but most commodities — in particular raw materials such as iron ore, copper, nickel and many other — though it is indeed most noticeable for gas and oil. To see the full extent of this drop in price, check out the IMF Primary Commodity Prices and their monthly reports, from which I extracted the following chart: 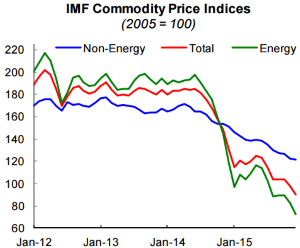 What are the causes of lower commodity prices?

There is no secret: the demand is falling and the supply increasing. The demand is falling mainly because of the slowing growth in China. As China imports less commodities to fuel its industry, a large chunk of the demand for commodities has disappeared, leading to lower prices. But simultaneously, the supply keeps steady or increasing on most of the commodity markets. On the oil market for example, 2015 has been a great year of surge or expected surge: OPEC countries are committed to keep flooding the market — mainly because the Gulf countries can afford lower prices thanks to low production costs, while their competitor might not sustain low prices very long. Furthermore, the ban on Iranian exports and the ban on US exports are going to be lifted. The market anticipates already this formidable future new supply, which drives prices down. The US are quasi independent as far as Oil is concerned, as the Shale gas industry has been rising in this country.

What are the consequences of lower commodity prices?

The first consequence is not caused by lower commodity prices, but rather by the root of this price drop: China's growth is slowing. Therefore there is more uncertainty than before about this market. As a consequence, exporters to China begin to worry as well as firms who have factories in China, as slowing growth and reduced imports might be the sign of a stabilization and potential lower inner demand. China being one of the world's biggest market, and one with a still relatively low penetration for technologies, it is indeed worrying. Thus, the stock of a lot of companies have been going down all over the world because of the situation in China, reflected in Oil prices.

Another crucial factor comes into action: most firms in the commodity sector have huge debt. Indeed, this sector requires big investments to begin the exploitation. Among others, Glencore's $30bn debt has been discussed a lot, but it is only an example among many others. In particular, there are two areas that are under threat: shale gas and renewable. These two sectors require higher investment than others. For shale gas, because the exploitation is costly and technically complex. For the renewable, because the R&D is costly and the production as a whole is costly as it uses high technologies. Lately, the partial default of Abengoa gave us a taste of what might follow. The debt accumulated by this industry is by no mean sustainable with such low commodity prices.

They don't. And your gut feeling is mostly incorrect.

This article suggests that the price of oil and the overall stock market are generally not correlated. The main reason is that there are too many other factors in play that even a large cost reduction in one area doesn't carry enough weight to affect the rest of the market.

At the end of the article, it does agree with you regarding the second part of your gut feeling, that airlines do see a direct benefit to falling gas prices:

However, here's an explanation of why lower gas prices don't automatically translate into long term benefits for airlines.

And this article suggests that even though airlines save a lot of money when gas prices fall, investors just don't care anymore! Specifically:

Those figures seem to illustrate the significant benefits from cheaper oil prices, but shareholders don’t seem too inclined to give the carriers much more credit for those benefits or the possibility that savings will be passed on to investors...

tldr; Your premises are mostly incorrect, and your idea of at least airline stocks increasing as gas prices decrease, although theoretically correct, does not necessarily translate to reality.

(Note: I don't like answering my own questions, but as I was unsatisfied with the answers thus far I did some research on this, and came to the conclusion that my original premises were wrong.)

It might be that the market views the falling price of oil as a sign, not of simply excess supply, but of falling demand. Consumers, in this scenario, are running out/have run out of purchasing power(cash/credit). They are forced to conserve what they do have for necessities like rent and other bills, which renders them unable to buy gasoline, driving down prices at the pump, but nor are they able to buy, either at all or in their preferred quantity, other things like food, clothing, electronics, etc. People simply cannot buy things if they do not have the means available to do so.

Given that, for most of us, gasoline is fairly high on the list of "must purchase", an economy that is too broke to buy gas is an economy too broke to buy almost anything else. So the further the price of oil falls, the worse off the economy must be, creating downward pressure on stocks.

The dollar is the international reserve currency. So when we have a strong dollar, and things (like oil and stocks) are priced in dollars, they become less attractive to foreigners. Foreigners of course buy a lot of American stocks and oil. It's kind of a similar logic of why Europeans will vacation less in New York when the dollar is strong and Americans are more likely to vacation in Europe.

Put another way, if a foreigner wants to buy oil, they usually have to buy dollars in a conceptual sense to in turn buy that oil. The more expensive the dollar is, the less likely they are to buy that oil (or stocks). This is why commodities and stocks seems to have a somewhat inverse relationship with the strength of the dollar.

It's the other way around - when stock prices fall it's because company profit outlooks are not good. Since a very large proportion of companies use oil or some derivative of it (see below), and there's still a lot being pumped out of the ground, then lower demand, same supply, means the market price falls.

The oil price falls when companies want less of it.

Companies that need oil and its derivatives include:

So to be clear, the sequence of causation goes: shock to profit outlooks (visible to people outside company boardrooms as a fall in stock prices) -> demand for oil falls -> oil market equilibrates at a lower price

A lower cost of production (low oil price) increases profitability, but a much lower demand of goods decreases revenues and net income. So this is the problem.

Oil - intensive company such as airlines now have a greater % of profitability, but Less revenues

Not the answer you're looking for? Browse other questions tagged stock-market oil or ask your own question.

7
What is the impact of fracking on oil prices?
5
Why US market is falling due to greece fear?
4
Why were petroleum product prices increasing in India in 2016, despite countervailing trends in the international oil market?
7
Do stock markets price in existential risk (i.e. global nuclear war)?
5
Simple model to predict oil prices
1
Oil prices forecast methods
0
How does the stock market correlate with the economy?
3
Are stocks prices included in GDP?