I'm reading a macro text book, the authors stated that in the 2000's we witnessed the greatest increase in oil prices ever, even when compared to the 70's oil shocks. To most of us, this fact went a bit unnoticed, at least when compared to the 70's. Usually in this shocks, we have a trade and supply shock. If the CB only considers the trade shock component, then the economy will face the usual stagflation. Some of the reasons the authors give for the lack of stagflation are increased lending from financial institutions, which prevented a marked decrease in consumption and eventually in output, and that workers were 'less inclined or able to get compensation through their wages' making the Equilibrium rate of Unemployment(ERU) curves to shift less than expected.

I would like to assess the truth of such claim. I've been trying to get some data, but I'm really bad at it. So, my question is: Are the authors right? From, the two pictures below (the last is US GDP growth rate if I'm not mistaken), I would say that it might have gone unnoticed, but I wasn't able to check if real wages decreased, and by how much...

P.S.: In your answers, could you please name your data sources, and give some indication as to how we could replicate the graphs? I'm interested in learning how to do it. Many thanks. 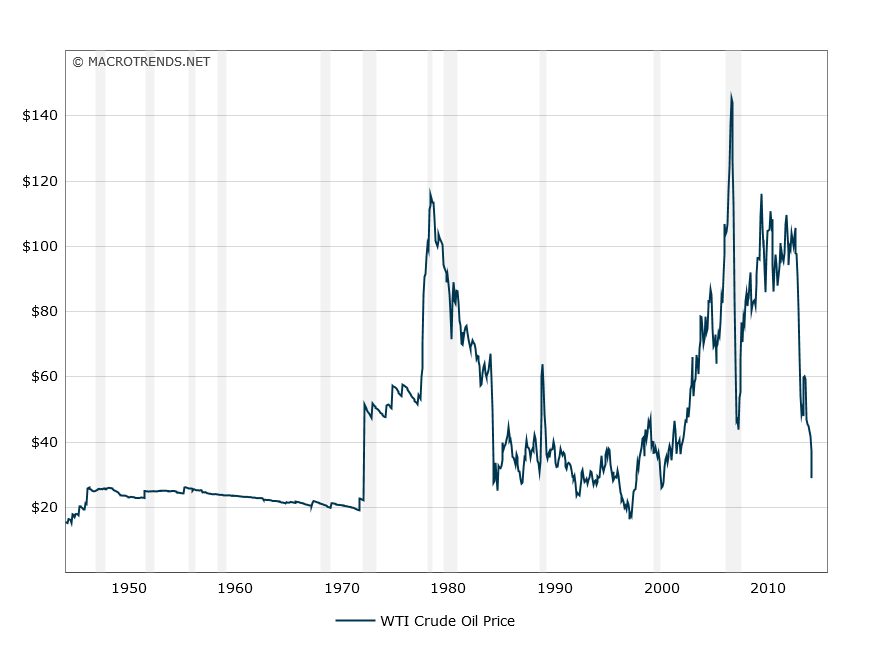 I consider the very rapid growth of infrastructure in the BRIC countries to be a strong driver of the high oil prices (as well as other building commodities) in the mid-2000s. It takes a lot of energy to build roads, mine copper and iron, make cement, etc...

I would disagree with two of the implications in the statement: "in the 2000's we witnessed the greatest increase in oil prices ever, even when compared to the 70's oil shocks. To most of us, this fact went a bit unnoticed..." I disagree with the comparison of the early '73 OPEC oil embargo and the oil spike in 2008, and I disagree that it went unnoticed. This is not an apples to apples comparison. In 1973 there were times that you could not buy gasoline. In 2008, gasoline was always available, it was just more expensive. And I, and all of my acquaintances, noticed it, and we complained about it, but we always had it available. That's a very big difference to not being able to buy something crucial to your livelihood.

That being said, I would agree that increased lending in the mid 2000s and a very strong world economy may be a reason that the spike of oil prices in 2008 wasn't considered a crisis.

I would also agree that oil prices did not cause the late 2000s recession. The recession was caused by an abrupt evaporation of interbank lending and a hasty tightening of credit.

Since you are a student of Economics (and I assume of markets), let me say something that wasn't clear to me until I spent 30 years working in investment management: the economy and markets are very different. The economy is 7 billion people a day waking up and having to be productive to survive. It is real, and it is very hard for any government to derail it, as hard as they might try. I have huge faith in the economy. The securities markets, rather, are places built on fear and greed, two very intense emotions that are self-reinforcing, meaning that the more the emotion is fed, the stronger it becomes, thus feeding that emotion even more. That is why we get bull market bubbles and bear market cliff dives that do not correlate in their magnitude with the underlying economy.

The stock market is a leading indicator of economic direction, but not of magnitude. Keep this in mind.

It destabilized the third world via food prices and killed economic growth. Yes it was noticed.

Energy prices increase before every major recession. The financial and demand-based theories of recessions, although widely believed, are completely baseless and unfalsifiable.

Not the answer you're looking for? Browse other questions tagged macroeconomics open-economy-macro balance-of-trade or ask your own question.

3
Abenomics and the Japanese VAT tax hike
3
Why the difference in productivity and wage trend in the UK economy?
1
why in some countries trade deficits for a few years generates economical crisis and in United States 40 years of deficit hasnt?
1
Why did the hybrid Phillips Curve become flatter (as empirical data shows) after the crisis?
3
What is the difference between trade deficit and current account deficit?
1
Why do some researchers include oil price in a VAR model?
1
Macroeconomic model of the open economy - NCO and loanable funds