Advanced economies tend to slide down to zero interest rates and stay there. Why? [closed]

Advanced economies (e.g., Japan, USA, Europe) tend to slide down to zero interest rates and stay there. Why? Are there any theories which explain this tendency?

Recently I read an interesting paper on this subject from the Bank for International Settlements:

Several countries are concurrently experiencing historically low inflation rates and ageing populations. Is there a connection, as recently suggested by some senior central bankers? We undertake a comprehensive test of this hypothesis in a panel of 22 countries over the 1955–2010 period. We find a stable and significant correlation between demography and low-frequency inflation. In particular, a larger share of dependents (ie young and old) is correlated with higher inflation, while a larger share of working age cohorts is correlated with lower inflation. The results are robust to different country samples, time periods, control variables and estimation techniques. We also find a significant, albeit unstable, relationship between demography and monetary policy.

As I'm not an expert on the subject, it is probably not the main explanation in literature but it's in my opinion an interesting research path.

The classic example is Japan. Their interest rates dropped to zero in the mid 1990s, and have been there ever since. It seems to be a chronic condition. 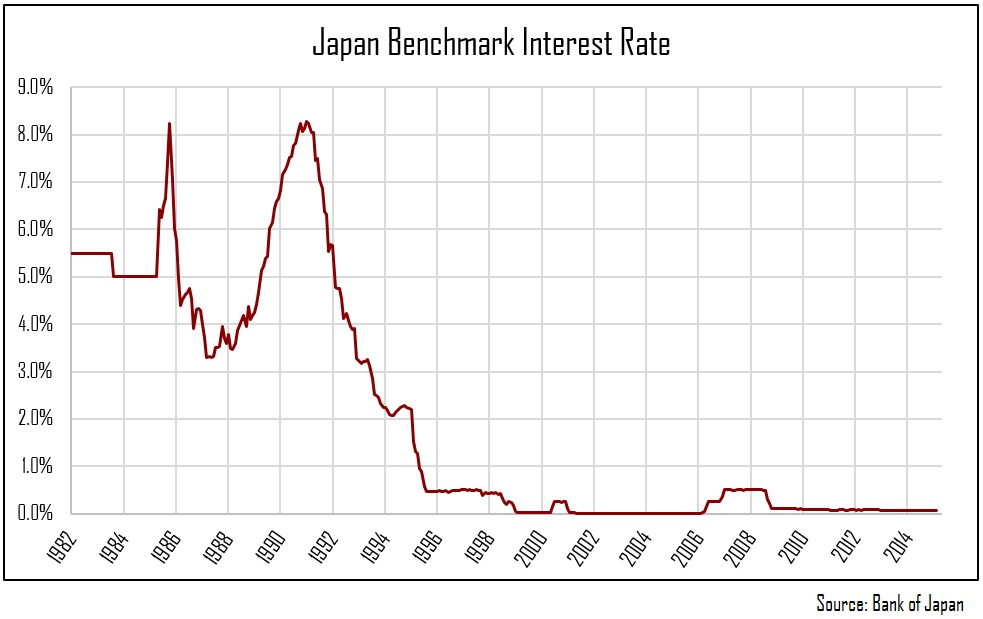 Granted, the US and EU may emerge from their current regime of zero interest, but there seems to be a clear trend toward zero, even in the US, over a period of decades. And the US doesn't seem to be having an easy time of raising interest rates again (shades of Japan). Some say that the US will return to business-as-usual, but skepticism is warranted because that's what they've been saying about Japan for the last 20 years. 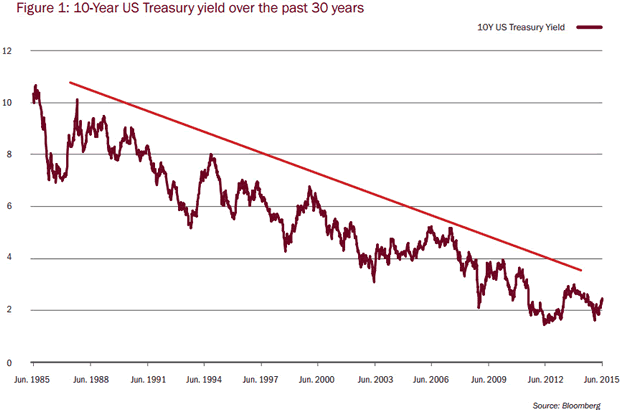 There are perhaps a variety of theories that can explain this, but I'll have a go at what seems intuitive to me.

First, to answer your question, one will have to ask the question: "What determines interest rates?"

In an economically perfect (frictionless, decentralized) world, the supply and demand of loanable funds would determine the interest rate. However, we know that it is the central bank, in most advanced countries, that sets the interest rate.

Now, what does an interest rate mean? One way of looking at it is the cost of borrowing funds. The central bank sets an interest rate, so that bonds are priced according to this rate. For instance, Treasury Bills (30 -day, 90 day) etc. Now,, these are instruments for the government to raise money to finance expenditure. If we are agreed on the point that countries that are "richer" or more "advanced" have banking systems that people have more faith in, then they need to offer less on any amount borrowed. In other words, people will buy these bonds, and will need a not very high interest rate because it is basically a riskless asset. Countries where the banking system is not developed enough will have to offer higher rates to compensate for risk.

Not disregarding the previous answers (although some seem like logical coincidents), the main reason is risk.

Both laws applicable to certain sectors (banking, insurance, etc.), and the theories on investment portfolio management state that to reduce risk on the total portfolio it is necessary to invest a reasonable share of the portfolio in risk-free (low-risk at most) products. What are financial products that are risk-free these days? Almost none. In fact, mostly government bonds of advanced countries are considered risk-free due to their stronger and more stable economic position. So the demand rises significantly. Driving the interest rate close to zero.

This should answer your question, but if you're wowing why it fell even more? To negative levels? This phenomenon was followed the currency, such as the EURO, POUND and DOLLAR, becoming stronger than the rest of the world; overall disthrust of the banking sector (preferring the government over a bank).

So it's a mix of different events that occurred around the last 20 years or so. But in short it be good begun with risk management and ends at risk management.

This question is closely related to the debate on secular stagnation. Recently Larry Summers reintroduced this term after it had been used for the first time in the 1930s by Alvin Hansen. A period of secular stagnation is characterised by low aggregate demand. In the market for loanable funds, this is reflected by high supply of savings and low demand for investment. Consequently, this results in low, and possible negative, (natural) real equilibrium interest rates. As low demand suppresses inflation it may be possible that the equilibrium real interest rate is out of reach due to the zero lower bond on nominal interest rates. At the prevailing real interest rate, savings exceed investments so that the economy operates below potential. This is a first interpretation secular stagnation. A second interpretation of secular stagnation is about low growth of potential, rather than growth below potential.

Vox published a freely available e-book (see link below) entirely dedicated to the subject of (the first interpretation of) secular stagnation. Several prominent economists briefly give their opinion or elaborate on one specific element in the discussion. The main arguments in favor of secular stagnation draw on (more or less permanent) shifts in the loanable funds market to explain the low observed real interest rates. On the one hand savings (supply of loanable funds) may have increased (shift to the right) due to:

It should be noted that in the e-book the effects of demographics and income inequality are considered as arguments in favor of shifts to the right in the supply of loanable funds whereas some papers in the literature (unrelated to the discussion on secular stagnation) do not share that view.

On the other hand, investment demand (demand for loanable funds) may have decreased (shift to the left). The main arguments are the following:

Again, the existing literature does not always provide support for all these arguments.

Next to the arguments in favor of secular stagnation (the first interpretation: growth below potential) that draw on shifts in the market for loanable funds, shifts in portfolios from risky to riskless assets and a shortage of safe assets may explain the observed decrease in real interest rates as well. All these arguments are discussed (most of them in depth) in the e-book.

In addition to the Vox e-book, the blogs of Ben Bernanke and Larry Summers give valuable and opposing insights in the discussion. Furthermore, also in broader academia interest in the subject is booming. So, clearly, when searching for an answer to the question why advanced economies seem to be stuck in a period of low interest rates, you will not find a unique answer or a single theory but instead, you will find a vivid discussion with quite different views and arguments.

As I mentioned, these links are a good starting point to indulge oneself in the discussion:

Many arguments I presented here also return in the paper that can be found following this link: http://www.brookings.edu/research/papers/2016/01/14-us-economic-policy-in-a-low-interest-rate-world-bosworth.

Not the answer you're looking for? Browse other questions tagged interest-rate or ask your own question.