Monetary Base vs. Stock price 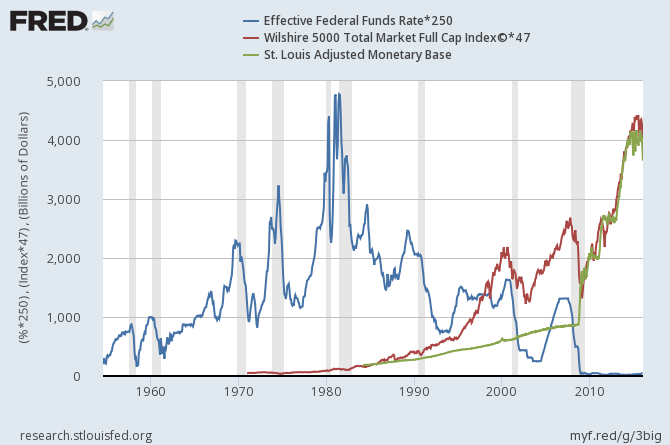 I have watched this video where he explain this chart. Basically he shows high correlation between Monetary Base and the Stock Market. But I cannot understand why he multiply the Wilshire for 47 and the "Federal Funds Rate" for 250 ?

UPDATE 2021:That correlation was true only for that time.

The multiplication factors are there so that they can be charted and be seen on the same axis as the St. Louis Adjusted Monetary Base.

The factor of 47 means that the closeness of the match between that and the Wilshire 5000 in 2000-2015 is easiest to see, by overlaying the curves in that period.

I think you have to look at the concept of spurious regression.

A key idea useful to interpreting correlations like this is the idea of "spurious regression". Any two time series X and Y each of which has a trend (even if it's a "random trend" !) will appear to have a high negative or positive correlation. (This is because, if there's a trend, all the values above the mean and all the values below the mean will tend to be on opposite sides of the time series, for both series. A high correlation then tells you that the above the mean values of one series coincide with the above(or below) the mean values of the other series...which is not very surprising.) A high correlation in this setup is an interesting finding if it's a correlation of the 'de-trended' series, or of the 'differenced' series.

Also, plot the series since then. The stock market has gone through upturns and downturns that do not seem to be related to the monetary base in any way.

Not the answer you're looking for? Browse other questions tagged monetary-policy stock-market or ask your own question.

1
Why does the stock price of listed firm matter for that firm?
0
Calculating monetary base from given data
0
Nominal vs real growth of monetary base
3
The effect of Monetary Policy on Asset Price Inflation
2
How does the Monetary base, Narrow money and Broad money affect inflation?
1
How exactly does a stock price gap overnight?
0
I there an established correlation between Federal Reserve balance sheet and MB( monetary base)?
0
The nutshell of stock price