What are the consequences of deflation in Japan?

I guess it is a wonderful recent study case of deflation, to be compared with the established view on the subject, so someone must certainly have done it. Can you point to such literature?

macroeconomics deflation japan
Share
Improve this question
edited May 7 '20 at 17:04

Here is some evidence from third-party colleagues who have been to Japan in the 90s and recently visited again last year. He informed me that prices were the same as in the 90s or lower.

This is definitely the result of deflation working in Japan.

Another example of deflation in action is a report you can read here: https://www.ozy.com/fast-forward/back-to-the-future-japanese-youth-flee-cities-for-the-countryside/87547

While here in the United States, most people don't get why someone like myself who works in the tech/economics field would want to own a small farming business, the youth of Japan do get it and they are moving back to rural villages and renting large traditional farm houses and adjoining land for $200/month, which is a fraction of what they were paying in cramped up studios in the city. This is an example of deflation in action where young Japanese citizens are abandoning costly housing, transportation, etcetera and adopting lifestyles that generate far less income and far lower expenses, both are deflationary.

So what are the consequences for these young people in Japan? Less stress, better health, higher quality of life overall? You would have to read the article and make your own conclusion.

You were not specific on consequences for whom.

The Bank of Japan has tripled its asset purchases: 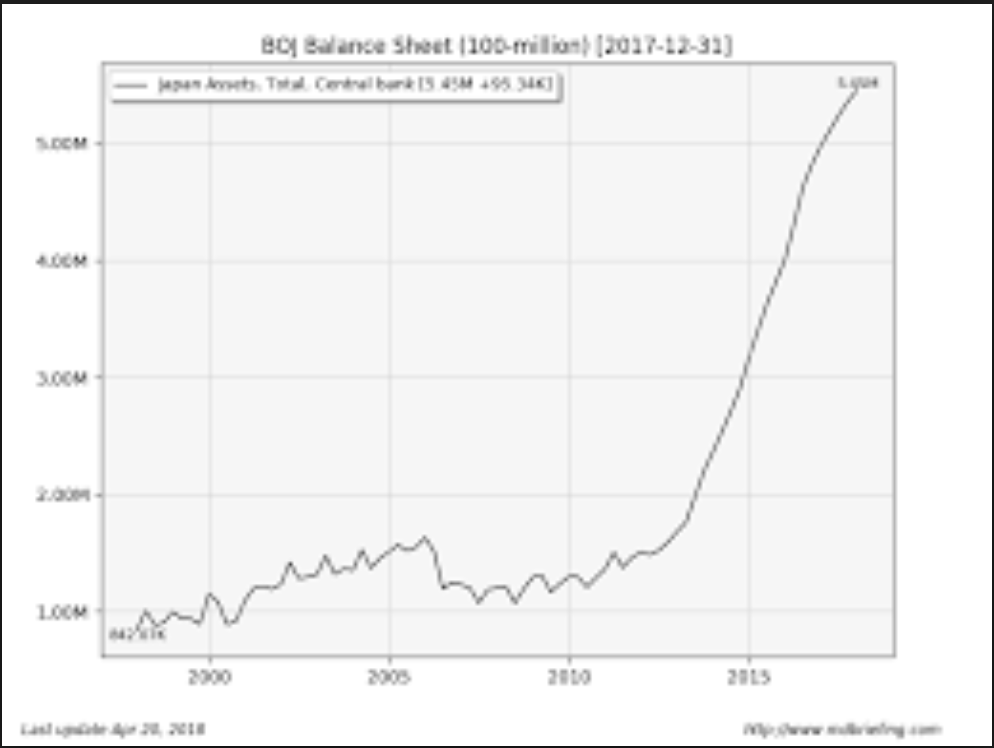 This has had little apparent effect on conventional measures of inflation. The purpose is to offset deflationary declines but it has not worked and its starting to burden the State. So those are consequences the State of Japan will have to deal with. They may try to pass that off to its citizens the way our government does here, but as you have seen above, more and more Japanese are fleeing to a simpler life in the countryside.

All this new spending on the part of the BOJ may lead to mal-investment and systemic asymmetries that will eventually destabilize the entire financial system.

Not the answer you're looking for? Browse other questions tagged macroeconomics deflation japan or ask your own question.

3
Easy to understand explanation of deflation and what causes it
5
List of theoretical models of learning
0
Will money still have any value in the fully automated world?
2
What data/factors/attributes do the professionals monitor in a top-down analysis on the macroeconomics?
1
Does this model of housing economy have a name, and if so, what are the common critiques?