I am interested in the problems that may arise when one models economical phenomena using mathematics and indeed also the nature of these models. Are there some good and easily accessible textbooks, articles, papers or other literature out there treat this topic? Perhaps a few classics that are well-regarded in the field?

My background is mostly mathematical, but I understand intermediate economics, both macro and micro.

I recommend reading Dani Rodrik's new book, Economics Rules: The Rights and Wrongs of the Dismal Science. Rodrik supports the use of mathematics as bringing clarity of meaning, and argues that the subject is far more applied and empirical than its detractors realize. 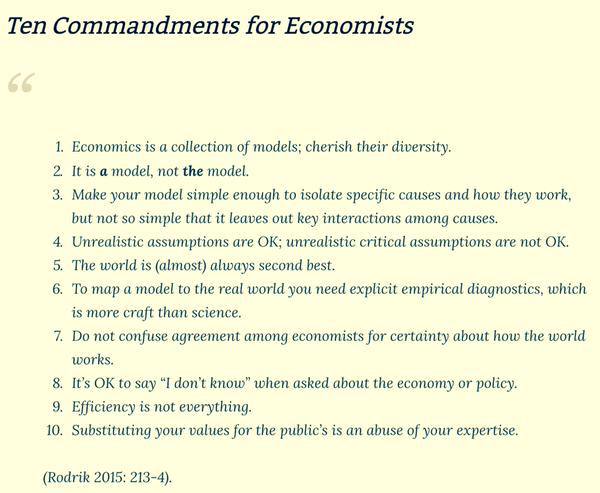 All the Commandements with Dani Rodrik's comments can be found here. This review can also be useful for clarifying some of the commandments.

One reference is "Knowledge and Persuasion in Economics" by Donald McCloskey. A sample chapter is available here.

The sentiment of the chapter is summarized by its final sentence:

Economists are in love with the wrong mathematics, the pure rather than the applied.

Last year, Paul Romer caused a bit of a storm over what he called "mathiness" in economics. What Romer has in mind is not a problem with mathematical models per se, but rather a concern that abuse of those models can allow economists to sneak a political agenda into their work under the fascade of rigorous theory. In romer's words:

The style that I am calling mathiness lets academic politics masquerade as science. Like mathematical theory, mathiness uses a mixture of words and symbols, but instead of making tight links, it leaves ample room for slippage between statements in natural versus formal language and between statements with theoretical as opposed to empirical content.

In other words, Romer is bemoaning the use of math to confuse and distract the reader, rather than to clarify and enlighten (as should be the case). I am not sure if this meets your needs, because it's more a problem with economists than with their method. Here is the paper: "Mathiness in the Theory of Economic Growth". The infamous accompanying blog post is here.

Another recommandation is Hal Varian's brilliant essay on How to Build an Economic Model in Your Spare Time.

Most of my work in economics involves constructing theoretical models. Over the years, I have developed some ways of doing this that may be worth describing to those who aspire to practice this art

The question about using mathematics to model economic phenomena is a rather old one dating back to at least the marginal revolution (19th Century). A couple of the key figures of this era were William Stanley Jevons and Leon Walras. I don't aim to provide a complete, or terribly accurate, history, but let's just focus on Walras.

In the preface to his Elements of Pure Economics, Walras paints a picture that suggests mathematics is a necessary input (basic ingredient) of economic modelling. He says:

As for those economists who do not know any mathematics, who do not even know what is meant by mathematics and yet have taken the stand that mathematics cannot possibly serve to elucidate economic principles, let them go their way repeating that "human liberty will never allow itself to be cast into equations" or that "mathematics ignores frictions which are everything in social science" and other equally forceful and flowery phrases. They can never prevent the theory of determination of prices under free competition from becoming a mathematical theory. Hence, they will always have to face the alternative either of steering clear of this discipline and consequently elaborating a theory of applied economics without recourse to a theory of pure economics or of tackling the problems of pure economics without the necessary equipment, thus producing not only very bad pure economics but also very bad mathematics. (Extract from preface to fourth edition).

The above quote marks the problems that arise when mathematics is not used in economic modelling.

Walras makes a further statement with regard to mathematical language, offering a critique to his predecessors. He says:

As to mathematical language, why should we persist in using everyday language to explain things in the most cumbrous and incorrect way, as Ricardo has often done and as John Stuart Mill does repeatedly in his Principles of Political Economy, when these same things can be stated far more succinctly, precisely and clearly in the language of mathematics. (Extract from Lesson 3).

Alfred Marshall expresses a similar view with regard to mathematical language being a more efficient tool than words. He says:

The chief use of pure mathematics in economic questions seems to be in helping a person to write down quickly, shortly and exactly, some of his thoughts for his own use : and to make sure that he has enough, and only enough premises for his conclusions. (Extract from preface to first edition).

However, Marshall provides a more muted opinion about mathematics being a necessary output of economic modelling:

But when a great many symbols have to be used, they become very laborious to any one but the writer himself. And though Cournot's genius must give a new mental activity to everyone who passes through his hands, and mathematicians of calibre similar to his may use their favourite weapons in clearing the way for themselves to the centre of some of those difficult problems of economic theory, of which only the outer fringes has yet been touched; yet it seems doubtful whether any one spends his time well in reading lengthy translations of economic doctrines into mathematics, that have not been made by himself. (Extract from preface to first edition).

If we now fast-forward to the present day, we see that mathematics is everywhere in economics. Thinking of doing a PhD in Economics? Well, mathematics (and statistics) is going to be served up first - no question about that.

So, what can go wrong when using mathematics in economic modelling? The main problem, I believe, is not being able to see the woods for the trees. This point is illustrated in Klemperer (2003) Using and Abusing Economic Theory. In this paper, Klemperer gives the following example:

So graduate students are taught the elegant mathematics of affiliation and whenever, and wherever, I give a seminar about auctions in practice, I am asked a question along the lines of 'Haven't Milgrom and Weber shown that ascending auctions raise most revenue, so why consider other alternatives?' This is true of seminars to academics. It is even more true of seminars to policy-makers. Thus, although a little knowledge of economic theory is a good thing, too much knowledge can sometimes be a dangerous thing.

The point is concluded pointing out that too much detail (i.e. advanced mathematics) can distract from what's really important in the wider context:

In short, a little graduate education in auction theory can often distract attention from the straightforward 'undergraduate' issues that really matter.

Lastly, the OPs question could also be addressed from the viewpoint of econometric methodology, but I'll omit that aspect because there are numerous controversies in econometric modelling. Names to look up would be: Clive Granger, David Hendry, Edward Leamer, Lawrence Klein, Christopher Sims, to just scratch the surface!

Nassim Taleb has some books that discuss issues with using math to model real life, which I really enjoyed. He holds no punches so isn't for everyone.

Relevant topics that stoos out to me include Fitting the world to the tools instead of finding tools that accurately capture the phenomena we're trying to describe (embodied by Procrustean bed story); Being too confident in models leading to overly risky decisions ("having no map is better than having a wrong one"); Plausibility of a story fitting the data as a poor proxy for its truth.

Not the answer you're looking for? Browse other questions tagged reference-request mathematical-economics or ask your own question.

7
Application of Poisson process in economic modelling
9
Which economic research articles or books use anthropological methods?
4
Good Site for Practicing Advanced Problems
3
Economic theory / papers on sovereign debt?
4
What are some good books and articles about the principal-agent problem?
6
What are some good advanced level textbooks on public economics?
3
What are good advanced textbooks to learn mathematics for economist?
5
How can I model my problems with math?