Is this use of a Law of Large Numbers correct?

The usual LLN I've seen, the theorem states that $1/n \sum u_t \rightarrow^p E(u_t)=\mu$,where the expected value is independent of t. However, I cannot apply it to the exercise below. 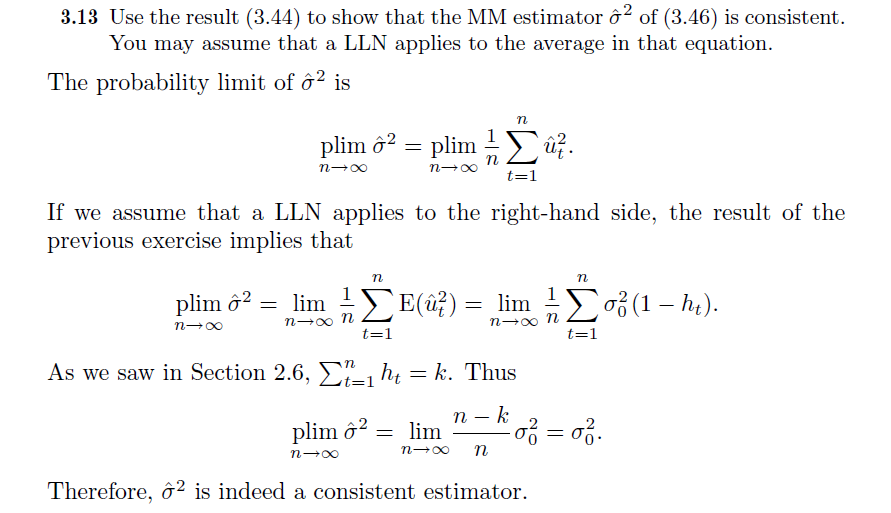 So, what LLN can I apply?

Are the $\hat{u}_t^2$ independent? If yes, the result is indeed a version of the law of large numbers due to Kolmogorov, and that deals with independent (but not necessarily identically distributed) processes.

A bit more intuitive formulation of a sufficient condition for the (weak) law of large numbers to hold(which is the one associated with the consistency property), for the average of a collection of non-independent, non-identically distributed random variables with finite variances and covariances, is the following (the "Markov condition"):

This simply says that it is sufficient that the variance of the average goes to zero, which has intuition. Decomposing,

Since all variances are finite, the first sum goes to zero. As regards the second sum, if each element is correlated with all others irrespective of how many there are, then this (double) sum has $n^2-n$ strictly non-zero elements, i.e of order $O(n^2)$. If this is the case, then it doesn't go to zero, and the sufficient condition does not hold.

The easiest way to see this is to assume that all rv's are equicorrelated: if

By the way this is how one can glimpse why, with "everybody with everybody" correlation, the sample mean remains a random variable irrespective of the sample size.

So what it takes to obtain the weak $\text{LLN}$?

We may assume $m-$dependence, namely that each rv is correlated only with $m$ others, with $m$ being a fixed number. This will send the variance of the sample mean to zero.

We may assume that as the sample size increases, the number of non-zero covariances increases with it, but not at the same rate: $m(n)/n \rightarrow 0$.

If we want to maintain that each rv is correlated with every other (which is the case of the OP since it deals with estimation residuals), then we arrive at the condition stated in @Oliv's answer: it has intuitive meaning (and justification) as "covariance diminishes as distance increases" only when there is a natural ordering of the sample (temporal or spatial). When the sample is bona-fide cross-sectional and one can re-order the rv's at will, the condition is just mathematical.

2
Would it be correct to use exchange rates of the biggest trading partners to the dollar as an explanatory variable?
2
Simultaneity problem: use of Instrumental Variables and test
6
The Frisch-Waugh-Lovell Theorem: an exercise
4
When shall I use bootstrap standard error?
7
Predicting $y$ when response variable is $\ln(y)$
1
Why $v_i=(X_i-\mu _X)u_i$ is i.i.d?
3
Heteroscedasticity and weighted least square estimator
1
What econometrics book or textbook should I use?
3
Why don't researchers use regularized probit model?