This question is considering an AD-AS model, with Price on the Y-axis and Real GDP on the X axis. The AS is composed of the Keynesian (horizontal), intermediate (upward sloping) and classical (vertical range.

I read that one explanation for the upward slope of the intermediate range is that as price level increases, output prices may increase beyond input price (due to rigidity). Hence, real value of inputs/costs falls, and it becomes more profitable to produce the good, and hence output increases.

Regarding this uneven increase in the nominal value of outputs and inputs, are they both reflected in the y-axis? Meaning, does the y-axis's aggregation of price contain both intermediate as well as final goods, or is it merely an estimation of final goods. I would think that in the former case, the rise in GPL on the graph (inducing increase in real GDP) contains both increases in output and input. In the latter case, the rise in GPL contains only output price increases, but the increase in input prices which lags behind is reflected off the graph.

I would think that in both cases, whether the increase in input prices is reflected on the y axis or not, the shape of the intermediate range still holds. Hence, is may not be significant. Is it simply a choice of what metric (CPI, etc.) I use to estimate price on my y axis?

I didn't quite well understood your question, but from what I could make of it I have answered the relation behind the formation of the Short run aggregate supply 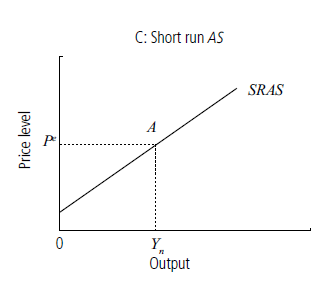 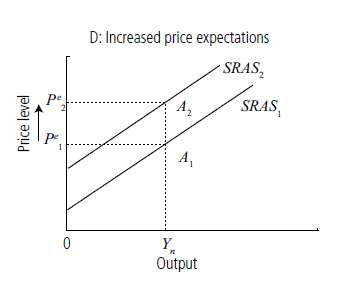 If you are confused between Workers negotiation and AS fall or rise - you should read about the WS-PS model. The WS stands for wage setting, PS for price setting.

Not the answer you're looking for? Browse other questions tagged macroeconomics price-level or ask your own question.

0
When would prices increase according to Malthusianism?
2
Stock Markets and Monetary Policies
3
What actually is aggregate demand?
0
Positive productivity shock with a fall in output
0
Increased production costs associated with increased output produced? Why do firms have prices increase with the SRAS or Supply Curve?
1
Share of domestic and foreign monetary flows between sectors of a country