What institutions are examples of “shadow banking”?

I often hear the term shadow banking tossed around when discussing the United States and Chinese economies. What exactly is shadow banking and could you give examples of some specific companies that act as "shadow banks"? I have been told that in China, shadow banking refers to informal loans that are not written up in any documentation. Is this correct?

While whomever told you about "shadow banking" in China is correct that in an international context, the term can often refer to informal banking arrangements (the earliest use of the term); however, these days, it is usually used in the sense first coined by Paul McCulley in a speech he delivered ("Teton Reflections") at the 2007 Jackson Hole conference. He described them as:

Structured investment vehicles, as noted by Kitsune, are certainly one type of shadow bank, but nonbank broker-dealers, certain real estate investment trusts, and particular hedge funds can be viewed as types of shadow bank. The question to ask in determining whether an entity is a "shadow bank" is twofold— do they:

As a direct answer to your question, Pozsar, Adrian, Ashcraft, and Boesky (2010) say:

I strongly recommend clicking on that link and taking your time to browse the map on page 2.

It's worth noting both that many of these entities have existed for long periods of time without incident, and that due to choices in how banking is regulated, shadow banks are often the result of a desire to both limit the scope of regulation and to limit the risk of failure within the scope of regulation— which has the effect of pushing intermediation activities outside the regulated sphere.

From the New York Fed:

These sorts of things are issued through SIVs, structured investment vehicles. So for examples of firms that used them, Citigroup had some SIVs like Centauri. Europe had a few of these too, like Barclays's (UK) own Sheffield Receivables.

Just a note here that when the IMF talks about the shadow banking sector in China, they seem to use a US-like definition. E.g. in a 2018 IMF paper titled "shadow banking and market-based finance", they include (for contrast purposes) money market fund assets in China and the "advanced economies": 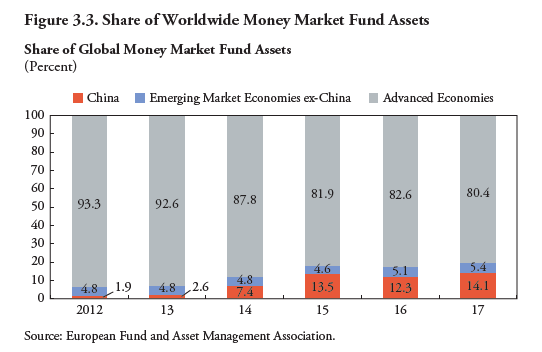 Another notable thing perhaps, is that although the paper has "shadow banking" in its title, inside it seem to prefer a different term--namely "nonbank credit intermediation (NBCI)"--as slightly broader, and seemingly reserve "shadow banking" per se for the "riskier" variants of NBCI... which they then admit can't be too clearly differentiated in practice.

Innovations in nonbank credit intermediation (NBCI) represent, just like any form of financial intermediation, a response to the unmet needs and preferences of borrowers and lenders. [...]

This paper begins by laying out a conceptual framework for distinguishing features of shadow banking that make it a less resilient form of market-based finance. [...] This framework then grounds the discussion of the following issues: How have the different forms of shadow banking— and market-based finance more generally—that make up NBCI evolved in the wake of the global financial crisis? [...]

Credit intermediation can take a variety of functional forms. As such, identifying the structural characteristics of credit intermediation—shadow banking and more resilient forms of market-based finance, as well as traditional banking—offers a useful point of departure for a discussion of possible financial stability implications (Table 2.1). 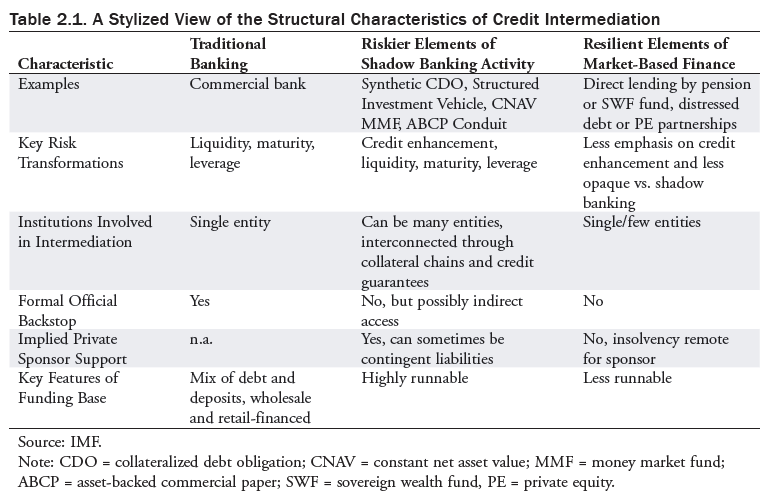 [...] Some caveats are important, however. First, Table 2.1 serves only as a stylized framework, where distinctions for shadow banking, as a less resilient form of market-based finance, are made to appear sharper than is often the case in practice. There can be many shades of gray depending on which structural feature of NBCI is under discussion (as particularly with bond mutual funds, where risk transformations pertain mainly to liquidity). Second, and related, while shadow banking is a less resilient form of market-based finance in general, this distinction does not speak to credit risk per se. Third, despite this lower level of resilience, there can still be an important place for shadow banking in the wider credit intermediation ecosystem, for instance by helping to complete markets and intermediate flows between willing borrowers and lenders with a range of objectives and risk tolerances.

Also Wikipedia has an article on China shadow banking , which links to a least a couple of useful sources:

The volume of newly originated entrusted loans reached its climax in 2013, accounting for nearly 49% of total shadow banking. Entrusted lending has since become the second largest financing source after bank lending.

Alas I can't find these "entrusted loans" mentioned as such in the IMF paper... which instead has this categorization of NBCI in China: 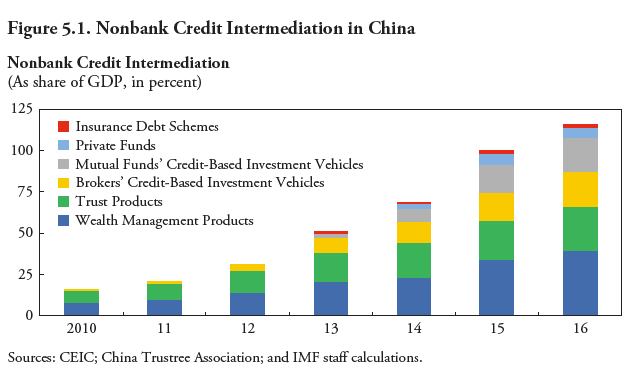 It's not terribly clear to me how to "map between" these different taxonomies of the Chinese shadow banking sector. The Brookings paper is more similar in its terminology to the CEPR paper. Although it has more categories, one can find "entrusted loans" in the Brookings paper called as such.

And yeah, the Brookings paper notes the obvious thing about connotation of the "shadow banking" term

We would like to acknowledge that “shadow banking” often has negative implications and sets banks as the appropriate comparison for institutions that sometimes share only a few characteristics with banks (for instance, insurers or funds managers). We would prefer to use a more neutral term; however, the phrase has become so ingrained in public policy discussions that we feel compelled to use it in this paper.

It's probably why the IMF tries to use/introduce a different term.

Relatedly, the Brookings paper observes that

All definitions of shadow banking pose practical difficulties, both in their precise definition and in their usefulness for describing the real world. For example, it is difficult to draw the line between those institutions and activities that are guaranteed by the government and those that are not. Formal definitions often prove deceptive when a financial crisis develops. For example, U.S. investment banks were suddenly swept into the safety net previously available only to commercial banks, once the Lehman insolvency occurred. In China, there is no guarantee system for bank deposits, but virtually everyone assumed, we believe correctly, that the government would in practice protect bank deposits. (Thus, the promised creation of an explicit deposit guarantee system may actually reduce the level of public guarantees, since it will have coverage limits, similar to those in most nations.)

[...] varying definitions of shadow banking can produce quite different estimates of the size of that system. Further, “shadow banking” is more of a catch-all than a category, encompassing a very broad range of heterogeneous activities ranging from wellestablished, simple and normally low-risk practices (such as money market mutual funds) to new, exotic and poorly understood transactions involving one or more layers of complex derivatives. This can make broad generalizations about shadow banks misleading.

Shadow banks are banks that authorities do not like, so they give them an ominous name. They are institutions that do not adhere to the rules and regulations the Federal Reserve and other governments have set up to keep track of their citizens. Here is an example:

Ms. Chu ran an underground bank, according to defense evidence cited by the Hong Kong judges, an operation that they said would match people who wanted to bring money into China illegally with those who wanted to get it out illegally. These strangers would deposit money in each other’s accounts — one inside China, the other in Hong Kong. Money doesn’t actually cross the border, making it difficult for regulators to track.

In one of Ms. Yan’s transactions, Ms. Chu directed her to deposit 3 million yuan (roughly $480,000) into a mainland bank account in the name of a stranger, also a client of Ms. Chu’s, the court said.

The same day, another stranger deposited checks worth the same amount that Ms. Yan had deposited on the mainland, converted into Hong Kong dollars, into an account Ms. Yan owned at an HSBC branch in Hong Kong. HSBC, which hasn’t been accused of wrongdoing, declined to comment.

Funds don’t actually cross the border, but the clients essentially moved money from one jurisdiction to the other, evading the $50,000 limit.

Not the answer you're looking for? Browse other questions tagged macroeconomics finance banking shadow-banking or ask your own question.

3
How does the fractional reserve banking system work?
6
What is Islamic Banking?
0
Which institutions are in the eurodollar market?
0
Are businesses included in economic institutions?
0
Difference between Unit Banking and Direct Banking
0
What is 'repo' in banking
0
How does the Fed measure the shadow banking sector in the US?
0
Transparent Fractional-reserve banking as an alternative to the current system