What are taxes for since law forbids printing of money?

This question bothers me for a long time: why government keeps up with the taxes instead of with printing money? This would decrease its operating costs, simplify law and generally raise comfort of existence of all people. Why I don't hear nobody speaking about such idea?

"Why I don't hear nobody speaking about such idea?"

By printing money instead of collecting taxes, what increases is the nominal disposable income. The "value of work" is certainly not increased. And the important question is, does this increased nominal income lead to higher consumption?

Consider a static society that produces food using labor $L_p$. This society wants also the government to offer some services, say law and order. So the government will also employ some of the available labor in the society, $L_g$ to offer these services. Now, policemen and judges must also eat to survive, so the food produced by the private sector must be enough also for them.

Say it is and part of it must be transferred to $L_g$ somehow. Initially, the government collects taxes for this purpose. The private sector faces

The government collects that tax, gives it to public servants as pay for their services and they in turn go to the private sector and purchase the food they need.

The economy uses money, and the current quantity of money printed is $M$, which is fully used to facilitate the transactions in a production-consumption cycle.

Then somebody comes up with the OP's idea: why collect taxes which nobody likes, and not print the money needed to pay the government employees?

Since taxes are not collected anymore, once production is finished and before consumption, the private sector has in its hands
a) Real quantity of food $C=C_p+T$
b) Money holdings $M = P_c \cdot C$

From here on, the standard story is that people will try to use $M+M_n$ to buy more food and consume more, but since available output is the same, $C-T$, this will increase prices (imagining a "bid war" to buy the output). This story is "standard", because it has been observed too many times around the world. Although governments have not eliminated taxes, they have on occasion printed additional money in an attempt to reduce the tax burden or increase government expenses without increasing taxes.

I will describe now two conceivable scenarios (alternatives or in sequel) that do not lead to increased prices:

Α) People do not attempt to increase their consumption with their newly increased purchasing power. They just stash away $M_n$. Next year, the same cycle happens, the government prints an additional $M_n$ quantity of money to pay its employees, the private sector save this new money on top of its previous savings etc,: the price level stays the same, while the private sector has stashed $2M_n$ away. After $k$ years, the private sector will have saved $k\cdot M_n$ in paper money... To do what with it? Look at it and "feel rich" but never actually use it?

Well, historical experience tells us that people will tend to use this additional money, exactly because they accept that it carries purchasing power. It appears that people are not content to just look at stacks of money bills and rejoice. I mean, initially they do, but then they want to go out there and translate these stacks of money bills into increased consumption (the Scrooge McDuck type of person is, alas, a negligible minority).

B) People are not Scrooge McDucks and try to buy more than before with their increased money holdings. But sellers do not increase their prices, they even resist any attempts by the buyers to offer a higher amount of money, and sell at the old prices until they run out of stock. Result: at the end of the day, people realize that their increased money holdings were not good enough to bring them higher consumption. But this will make them question and re-assess how valuable, after all, is this money. Which leads us to the exact same consequences with a price increase: all money will lose part of its carrying value in both cases.

People will enjoy the same consumption level as before, but they will feel happier now that they don't pay taxes. But since the government keeps printing new money year after year, prices will go to heaven. Again, historical experience says that people appear to dislike high inflation, probably because in the real world with millions of products the price system plays an important signalling role, which appears to be understood and be valued by the people. High inflation impairs this function, increasing the transactional costs of the people. So one should offset the gain in happiness from the feeling of not paying taxes, to the problems that will be created by high inflation... since recorded episodes of hyperinflation as well as high inflation were time and again ended by government action, it seems that people support such measures, which implies that even though they don't like paying taxes, they dislike more living in high inflation. 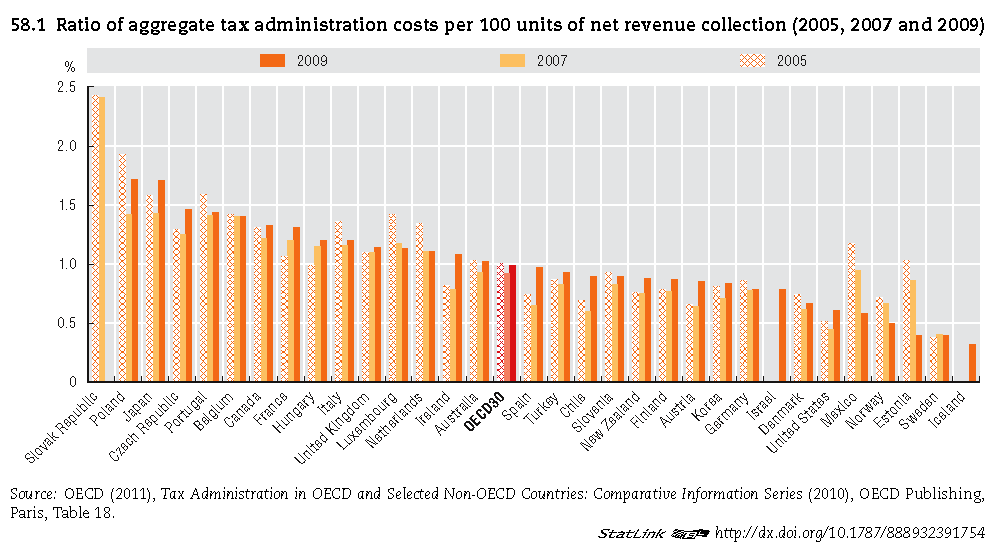 An excel file with the data series and the diagram can be downloaded here.

More info from OECD on the matter of tax collection efficiency, here.

The current answers correctly point out that financing the government via the printing press would generate inflation. Since inflation is bad, this would be a bad policy.

However, these answers miss out on several advantages of an inflation tax. Firstly, there would be substantial productivity gains since the entire government revenue system, tax advisors, firm employees dealing with tax reports, etc. would not be necessary. The bureaucratic burden from current taxation systems are substantial. Secondly, the disadvantages of higher inflation no longer seem as severe as in the past. Under proper regulatory control (we will come to that), inflation rates could be increased by several percentage points without the risk of hyperinflation or inflation volatility. A higher average inflation rate may even make it less likely that we would hit zero interest bounds which central banks currently struggle with. A moderate increase in inflation may therefore not be bad.

Unfortunately, even in the most favorable scenario where inflation comes at no costs it would be a bad idea to switch the government revenue to inflation:

The value of money is basically determined just like the value of anything else - supply and demand. So if you print a lot of money (supply increases) its value will go down. That's the reason the government doesn't just print a lot of money and give it to everyone, because that money would lose value, i.e. it would lead to inflation (rising prices).

The "Quantity Theory of Money" tells us that the purchasing power of money is related to production, i.e. the real ressources in the economy. That's because all money must be able to buy all goods in an economy by definition. So if you have 2 pieces of bread and a dollar in the world, that dollar is worth 2 pieces of bread. Say now, you printed another dollar, but bread has stayed the same. Now each dollar is worth only 1 piece of bread. So in total, nothing has been achieved, besides making money less valuable (which translates to rising prices. Before a pies of bread cost half a dollar, now it costs 1 dollar).

Furthermore, once you create inflation this way through priniting money, besides achieving nothing, it has cotst on the real economy, through for example menu-costs or shoe-leather costs. That means people need to adjust not, menus need to be printed anew for restaurants and that's costly etc. Also savers and people on fixed income lose money through inflation. Also you might send the economy into an inflationary spiral. Often high inflation leads to even more inflation, which eventually can collapse the whole economy and currency. See episodes of hyperinflation for this.

Printing new money instead of collecting taxes means everyone will be effectively giving away the same amount of their savings every year, which is equal to the inflation rate. This will be bad for two reasons:

Not the answer you're looking for? Browse other questions tagged monetary-policy money-supply taxation government law or ask your own question.

1
Why do we model that higher government involvement increases output?
4
Why doesn't the government create money, spend it for free without interest, and recollect it with taxes?
16
Why aren't we seeing carbon taxes in practice?
2
Why don't we count incomes of the government from taxation when calculating GDP using the income approach?
0
Do I understand correctly that taxation-based government expenditures allow GDP to grow?
3
Are quantitative easing and helicopter cash really different tactics? And how does QE relate to Modern Monetary Theory?
2
Would printing money be necessary for remedying macroeconomic problems such as underemployment and overindebtedness if trade was balanced?