Just how much calculus is involved in the study of economics?

I'm a sophomore at a community college that is set to transfer to the University of California as an economics major. It's required that I took Calculus 1 and Calculus 2, but not Probability and Statistics – which I think is strange. In Principles of Microeconomics and Principles of Macroeconomics, I never really used any calculus, but then again, those are introductory classes.

I am terrible at calculus, but I love economics. When I get into the more advanced classes, is calculus going to be more present? If so, then I think I might have to rethink my major.

Calculus is one of the most widely-used branches of mathematics in economics. Here are two (non-exhaustive) examples of important ways in which economists use calculus: 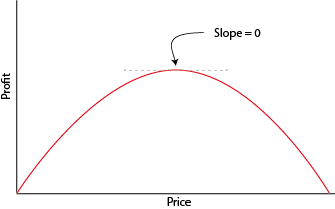 In your principles courses, you have probably seen problems that could be solved in this way, but were instead solved through some other method. almost certainly, the courses were organized like this in order to avoid making calculus a requirement. But, as the problems you tackle become more sophisticated, there comes a point at which the effort needed to learn calculus is much less than the difficulty of trying to figure out a way to do economics without calculus.

To answer your explicit question, there is lots of calculus in economics. But, to answer the implicit question in the background, I don't think you should be too worried by this because:

* If you are wondering why I use $h$ for competitiveness, take a look at the Herfindahl index.

If you intend to work on economic history, it could be not very useful but let's say, if you will work on macroeconomics, growth theory, you should have a good enough knowledge for optimal control theory, which could be considered as a branch of calculus of variation.

Also, probability and statistics are very useful courses if you intend to work on uncertainty, finance or macroeconomics or stochastic calculus. As a nutshell, all these are tools that economists use for doing formal economics.

There are some advices of Thomas Sargent on this topic that could be relevant for you. Here is the link ;

Depends how far you intend to study. Graduate economics get rather deeply into real and functional analysis and game theory.

You should ask yourself why you want to study economics. You are probably right to drop this major if you intend to pursue a Ph.D. If you hate math, then you will hate studying economic theory. However, many students study economics and go on to become financial analysts and business consultants. Most of them do not even use basic calculus in those jobs.

If your goal is to get an economics degree to prepare yourself for a professional business career, then there is nothing to fear. You will probably have only a few economics courses that will require the use of calculus on assignments and exams. You can probably fill out the rest of your degree with intermediate economics courses (e.g. health care economics, public finance, international trade) that will use very little math.

While calculus is useful for economics, the relevant issue is that it's important knowledge whether you want to do economics or not. Any reasonable undergraduate degree should include calculus anyway. It's a fun and useful tool to think about many problems.

Not the answer you're looking for? Browse other questions tagged mathematical-economics or ask your own question.

4
What are the most recent devopments with applying fractals to economics?
2
How to get hang of mathematical language that is so extensively used in economics?
11
Calculus and Indifference Curves in an Urban Economics Example
8
Where do the rich and poor live in a city? (Calculus)
0
Debt accumulation equation derivation: valid given that it rests on calculus and the time period is a year? (nowhere near infinitesimal?)
1
Whats the rationale for using taylor series in economics?
12
What is the point of all the models in an economics degree?
0
How to get the condition of OLS mathematically?