Limits to Growth: Is environmental collapse by 2030 a likely scenerio?

According to a simulation from 1972, the results of which were published in 'The Limits to Growth' environmental collapse is due mid 21st century. The Guardian reports that Dr. Graham Turner reran the simulations using recent data and the collapse is actually due sooner. Here is the referred paper by Dr. Graham Turner:

Quoting from his profile by the Guardian:

Dr. Graham Turner is principal research fellow at the University of Melbourne's Melbourne Sustainable Society Institute. He has a background in applied physics and his current work involves whole-of-system analysis on the long-term physical sustainability of the environment and economy.

As economists do you think Dr. Turner is right?

We know one core element of the Guardian article is nonsense - the discussion of Peak Oil.

The Peak Oil lament, fashionable a decade ago, was that we didn't have enough oil, and that was going to become a major problem very soon.

However, we know from climate science that the reverse is true - we have far too much fossil fuel reserves (disclosure - that's a paper by my colleagues). Our challenge isn't that we won't extract enough to continue economic growth - it's that we'll extract too much and cause a major environmental collapse. Turner's report makes a significant show about the age of cheap and easy oil being over (pp 11,12) - and that's a prediction that was made to look very silly, quickly, as the report's publication in August 2014 happened just as the 18-month oil-price crash caused by huge global over-supply was beginning.

Are we causing huge ongoing damage to the environment? Yes.

Were all of the significant predictions of the Club of Rome correct? No. Not only has geometric population growth stopped, but even arithmetic growth is in decline - and the growth wasn't capped by disaster, but by better healthcare, better access to contraception, and more education and emancipation of women. Food production per capita has way exceeded predictions. And the renewable alternatives to fossil-fuel energy are already economic and scalable for static applications, and becoming so for transport too.

As economists, we should be well advised to restrain from making such forecasts. Future is hard, if not impossible, to predict.

For example, take the job reports in the US which are published on a monthly basis. Forecasters, most of which financial analysts and economists, consistently fail to produce accurate expectations, sometimes by a large amount. Latest example with the previous report (20% error). Basically all forecasters of economic growth year-on-year constantly fail and have to adjust their forecast as the year passes by. See WTO and IMF, but also private institutions, such as Fitch or Standard and Poor's.

If economists fail to predict what's going on month on month, or year on year, I don't see how they could produce any accurate and reliable forecasts @15 years.

Furthermore, most models rely on observations of the past and of the present. Such data are a terrible basis to predict the future. Some learned this the hard way, such as LTCM whose risk management and investment policy relied on past observations to predict volatility, leading them to burst in 1998 when unseen volatility did spread. Future is unpredictable and is unlike the past. Notice that a lot of major innovations occurred by pure chance (lasers, internet to some extend, Carambar candies, and so on). Thus, it would be foolish to make guesses on what's going to happen 15 years from now, especially relying on today's data and known facts.

Also note that it is always much easier to predict doom than prosperity. It attracts public attention, and you can always say after the fact a nice "I told you". French economist Jean-Marc Daniel regurlarly underlines this fact in his books (for example Ricardo reviens ! ils sont restés keynesiens, though I doubt it was translated in English.)

If you want some interesting readings (and more) on the topic, I suggest you take a look at the work of Nassim Nicholas Taleb , in particular his book The Black Swan. I also recommand the podcasts hosted by Russ Roberts, with Harvey Campbell, Nobel laureate Peter Hansen, or James Heckman, which deal with the limitations of economics.

TL;DR: nobody has any idea about what's going to happen 15 years from now.

Arguments following just one or two lines of predicted change are not useful at best and really deceptive in reality. The interactivity of Non Renewable Natural Resource consumption and energy harvesting is the key area that controls change coupled with the pollution caused by energy harvesting and the consumption of NRNRs. The economics are almost inconsequential. As far as predictions go the LTG report did not have predictions. Read it, not take hearsay verbatim.

I just want to add one important but neglected fact about the compound growth and doubling time. The frightening fact is that it will take a very short period of time to consume an enormous amount of resource in the later years of compound growth. The doubling time is 72 divided by the growth rate.

For example, if we assume 3% annual growth in resource consumption (thus 24 years is the doubling time), it will take only the next 48 years (two doubling times) to consume the remaining 64% of the total resource. At year 120, 64% of resources are available and we are happy (because we still have plenty of resources remaining). However, it will take an additional 48 years to consume the remaining 64%. See Dr. Albert Bartlett: Arithmetic, Population, and Energy in Wiki. 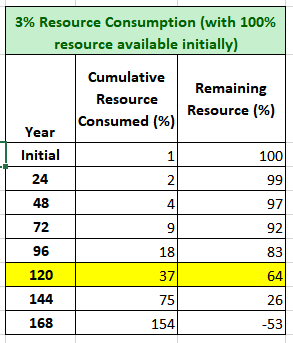 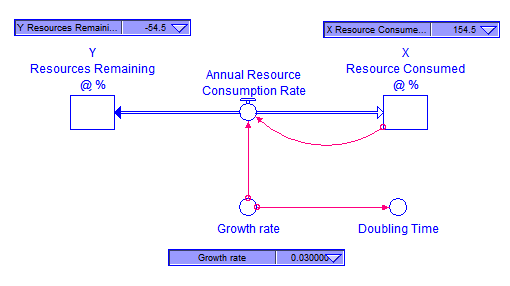 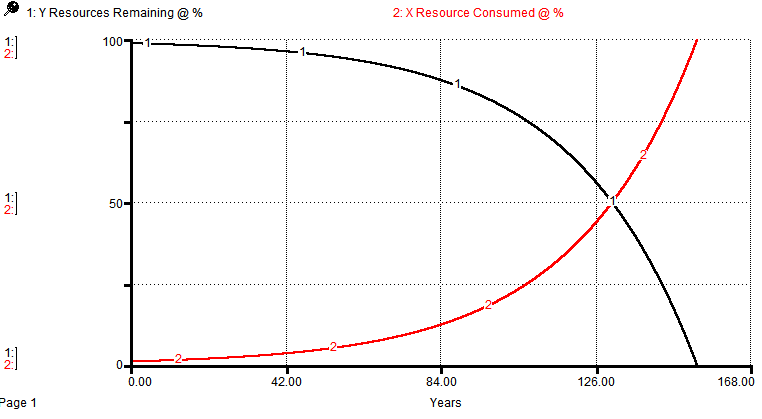 Not the answer you're looking for? Browse other questions tagged environmental-economics or ask your own question.

15
Is Malthusian theory of population growth being realized?

2
Is my reasoning about economic growth and environmental sustainability correct?