How does lowering a corporate tax rate benefit a nation?

When governments talk about about lowering corporate tax rates they claim there is benefit in one form or another. The problem is the mechanism of how the benefit can work is never explained.

The closest I've seen is that it will result in more investment but often the corporate tax is only after an organisation has made a profit.

Some sort of worked example of how this may affect decision processes or some analysis of changes that have occurred when companies have lowered corporate tax rates will also be nice.

I. The case for government revenue

The rationale behind this argument is that it it possible to increase the tax revenue by lowering the tax rate. A. Laffer draw a curve which represent this: 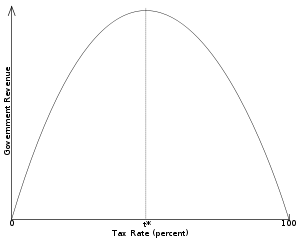 The idea is that if your tax rate is above $t^*$, then taxpayers try to evade taxes, develop the shadow economy, avoid taxes, or simply reduce the amount of work that they do because their is a lesser incentive to do more when the state takes a bigger share of the reward.

So the debate is therefore to know whether we are already beyond this optimal tax rate $t^*$ or below. Emmanuel Saez and Thomas Piketty argue that this optimal tax rate is about 70%. Others, such as Arthur Laffer, believe that it is much lower, and that the government revenue would actually increase if the tax rates were lower.

II. The case for growth

Lower tax rates can also be adopted in order to increase the attractiveness of the country to foreign investors, and hopefully develop the economic activity. Many countries have been known recently to struck tax deals in order to attract business: The UK with Google, Ireland with everybody, Luxembourg with Amazon and others, etc.

The outcome is that by collecting a little bit less tax revenue from each corporation, a market can retain enough existing participants and attract enough new participants so that the slightly lower tax rate generates more tax revenue than the higher tax rate.

That is, governments lower corporate taxes because they believe doing so can actually net them a larger amount of corporate tax revenue.

This is a very simplistic answer and there are obviously other ways to frame the question. For example, a government might lower corporate taxes for a specific sector, knowing they will lose out on tax revenues, in an effort to attract more market participants and increase the rate of innovation in that market.

You know that tax breaks don't go to new investments, companies and people always say "Thank you very much" then don't invest. It has not helped new Zealand, there was a study on this. Also it didn't help when Reagan used his reagonomics and gave tax breaks for the rich. They simply didn't re-invested it. http://www.businessinsider.com.au/study-tax-cuts-dont-lead-to-growth-2012-9?r=US&IR=T Check this link!

1
Does lowering corporate tax rates increase investment or provide some other benefit to a nation?

3
How does corporate income tax apply?
5
What is the difference between VAT and corporate tax
1
Is corporate tax an argument in equal income tax (from labour and capital) debate and does the return on capital depend on rate of the corporate tax?
3
Can corporate tax loss carryforward function like a sort of insurance policy?
1
Does higher tax on luxury goods does more harm than benefit?