Gold and loss of faith in central banking

In this article here, http://www.telegraph.co.uk/investing/gold/gold-resurgence-whos-buying-gold-and-why/ , it states that "gold tends to do....best when markets lose faith in central banking".

Also can someone think of a historical example when this happened.

I think @DornerA gave a good answer for reasoning behind the mechanism.

For a historical example, look no further than the fiscal crisis and the rapid increase in gold price from 2008-2011. 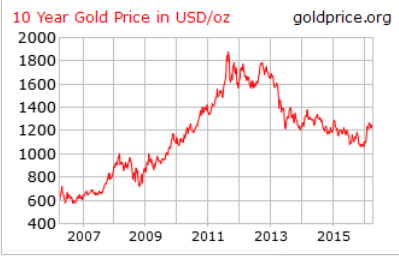 Of course a lot happened during those years with house prices collapsing in the U.S. Faith in central banking is closely associated with the value of money and the belief of whether a central bank can keep the economy steady or not and in a situation where this belief is low, people gravitate towards widely accepted stores of wealth.

Not the answer you're looking for? Browse other questions tagged reference-request monetary-policy central-banking financial-markets value or ask your own question.