How can we measure the size of the new uber-driver-type economy?

Uber has probably hundreds of thousands of drivers just in the US. There are many other gig economy firms growing quickly, not only lyft, but also Amazon Prime, bite squad, etc. Is there some place in the data that we can observe this happening? Is there a number that has been growing quickly for part time, self employed maybe? Is there a number in the Social Security statistics? More generally, how do we measure the actual size of this relative to the US labor force? Maybe we should look at the fraction of self-employed people in the US?

Those are important and difficult questions to answer. Regarding Uber, Jonathan Hall (Uber) and Alan Krueger (Princeton) wrote a joint paper on An Analysis of the Labor Market for Uber's Driver-Partners in the United States. The paper provides the first comprehensive analysis of Uber's driver-partners, based on both survey data and anonymized, aggregated administrative data. The following figure documents the exponential growth in the number of active Uber driver-partners in the United States from mid-2012, when uberX was launched, to late 2014. 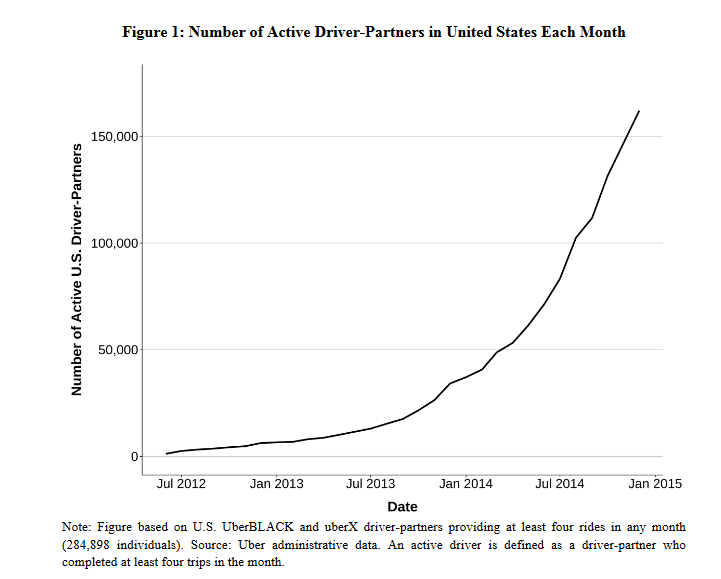 More generally, they point out that the Bureau of Labor Statistics (BLS) publishes a supplemental module to collect information on various forms of contingent and alternative work arrangements in the Current Population Survey (CPS) in 1995, 2001, and 2005 that provides the most informative data available, although it is now somewhat out of date. The BLS contingent worker supplement also measured the share of workers in alternative work arrangements, including independent contractors. Workers in the sharing economy can work part-time or full-time, or participate on a temporary or permanent basis, but they are almost universally working as independent contractors while they are participating in the sharing economy. Thus, evidence on independent contractors can provide relevant background for understanding the nature of the labor market in a sector that overlaps with the sharing economy.

Not the answer you're looking for? Browse other questions tagged labor-economics unemployment or ask your own question.

4
Have automation and technological advance been shown to have a positive impact on society and the economy or a negative one?
3
Can the cyclicality of the real wage be used as a measure for the degree of competiveness in the labour market?
8
Why does immigration boost the economy? (or does it not…?)
1
If someone stays at home because they can't find the type of job they want, are they included in unemployment numbers?
2
How to account income from the informal sector?
0
In April 2019 our economy created 263000 new jobs, however, total employment went down from March to April by103000 jobs. Why this difference?