On the Ms. Exponential vs Ms. Hyperbolic vignette

I've come across this little parable purporting to show why exponential discounting is superior to hyperbolic discounting1:

The greater bowing [of the hyperbolic discount curve] means that if a hyperbolic discounter engaged in trade with someone who used an exponential curve, she'd soon be relieved of her money. Ms. Exponential could buy Ms. Hyperbolic's winter coat cheaply every spring, for instance, because the distance to the next winter would depress Ms. H's valuation of it more than Ms. E's. Ms. E could then sell the coat back to Ms. H every fall when the approach of winter sent Ms. H's valuation of it into a high spike.

The figure that the excerpt refers to looks somewhat like the one shown below, the most notable difference being that I've added the legend to indicate which curve is which2, together with the analytical form of the actual discount functions used3.

But it seems to me that the argument, as presented above, is spurious. It is clear that whose valuation would be more depressed, depends on the time. Therefore, the exact same argument with the roles of Ms. E and Ms. H reversed, would work for any timepoint between the point at which the curves intersect and the vertical axis.

This means that, if Ms. E's exponential discounting curve were the green one, then Ms. H would be able to quickly immiserate her by applying the strategy described in the excerpt, and this would be true irrespective of the length of the time interval between the buying and the selling back of the winter coat.

In summary, the excerpt's argument for the superiority of exponential discounting over hyperbolic discounting does not hold water, in my opinion.

Now, I realize that the excerpt is not being particularly rigorous, and that there may be a more convincing way to demonstrate the superiority of exponential discounting over hyperbolic discounting. If so, what is it? In particular, I want to know the following:

(By unilaterally I mean that the strategy is available only to someone who uses exponential discounting vis-à-vis somoneone who uses hyperbolic discounting, and not viceversa.)

2 I have added the labels "hyperbolic" and "exponential", according to my interpretation of what the author means by "greater bowing". I'm not a native speaker of English, so please correct me if this interpretation is backwards.

3 Note that all these functions have $(-\infty, 0]$ as their domains. This choice was required in order to match the appearance of the original curves. Also, I should stress that the functional forms I used for all these curves are my own, chosen so as to approximate the appearance of the original curves. The text of the excerpt does not give the functional form of the depicted curves.

At $T=0$ borrow a hundred dollars from Henry the hyperbolic discounter for the full time period $t$. The interest rate should be zero because their discount rate over loans of that period is $1$. For simplicity, make it a zero coupon loan, with the payment due at maturity and assume you both agree their is no credit risk. Now step forward one period to $T=\epsilon$. Offer to sell the loan back to Henry. His discount rate is now $\frac{1}{1-\epsilon} < 1$ so the interest rate is lower than what he would charge on a new loan so the price must be above par. Call the price $100 + \psi_1$. Do the sale, tear up the loan, and pocket $\psi_1$. Ask for a new loan of a hundred dollars, again at zero coupon, now at interest rate $\frac{1}{1-\epsilon}$ per period. Step forward another period to $T = 2 \epsilon$. Again, $\frac{1}{1-2\epsilon} < \frac{1}{1-\epsilon}$ so you can sell this obligation too for more than par ($1 + \psi_2$). Do the sale , tear up the loan, and pocket $\psi_2$. Rinse, lather, and repeat until they don't have a hundred bucks to lend you.

Update: Hopefully this is a simpler example. What you do is in each period buy T (T$\geq$2) period a bond from Henry the Hyperbolic discounter. You also sell back to Henry the bond you purchased in the previous period. You will be willing to do this as long as the time period is short enough that the profit on the transaction is high enough to make up for your own discount rate. 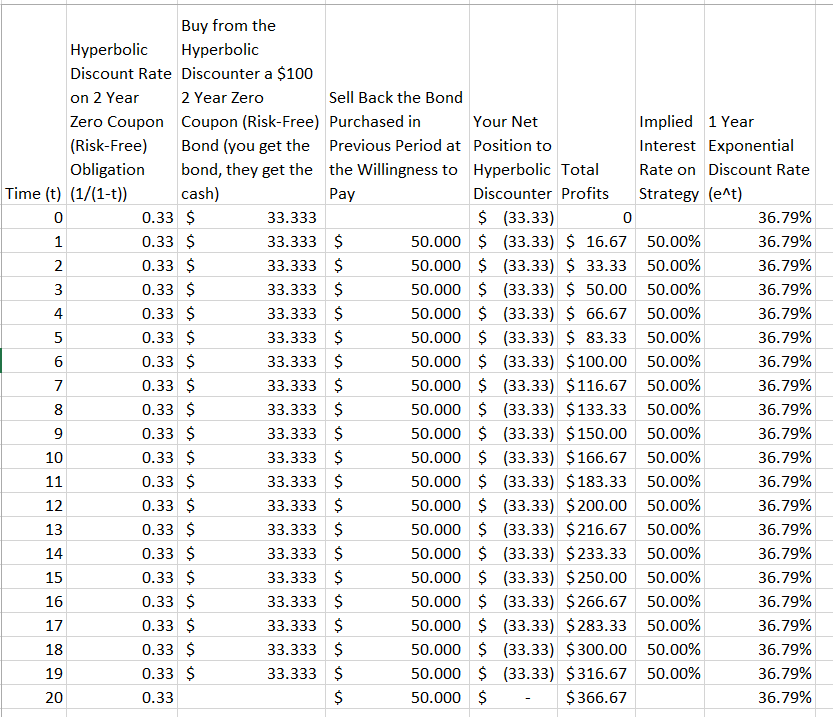 Eddy the exponential discounter is willing to lend the cash to Henry because is profits on that loan are high enough to compensate him, even though his rate of time preference for both 1 and 2 year loans is higher than Henry's.

Not the answer you're looking for? Browse other questions tagged game-theory utility behavioral-economics value discount or ask your own question.

6
Nash social welfare function with negative exponential utilities
5
Indifference curve - Does $dU = 0$ hold in higher dimensions? / Problem of integrability
10
Can the stock market show indefinite exponential growth?
3
Value function iterations with hyperbolic discounting
0
How does the notion of utility differ from that of value?
2
Capital Recovery Factor for Hyperbolic Discounting