What is the logic the Fed used for paying interest on reserves?

During the last few years, the Fed has been paying banks interest on reserves. Its a strange policy if you want banks to invest their money in the real economy. Why did they do this? Is it a way to recapitalize the banks? Is it a way to guarantee their solvency irrespective of the availability of investment opportunities? Is it a way to limit the potential inflation of QE?

According to Bernanke himself, interest paid on reserves in excess of the penalty free upper bound are used as an additional tool with which the Fed can place a floor on the federal funds rate.The logic here is that banks have no incentive to lend in the overnight market at rates lower than this interest rate.

This link has some links to info on the topic. It's an old answer that got little attention and so here is my chance to get some use out of it :)

The aim of this policy (introduced in 2008) was to "give the Fed better control of the short-term interest rate" via reducing the demand for short-term government bonds by taking out some of the excess cash that banks hold.

In a crisis, banks are not lending, and thus the cash they have is poured into many assets, including short term government bonds. This reduces the market short-term nominal interest rate. To control for this, the Fed has to sell some of their T-Bill holdings in order to reduce the money supply. Yet, the intervention of the Fed are more precise if the amount of cash willing to participate in that market is smaller. That is why offering banks an incentive to gain a return by parking part of that cash into US regional Central Banks helps to lower that demand.

Certainly, this policy also helped banks to build up their assets. However this has been a relatively very minor issue, according to a recent inlet in The Economist (March 18th). The graph is below: 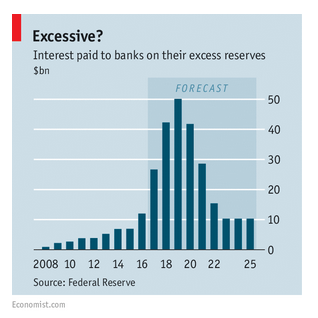 There is some opposition to this policy though. On the one hand, some say it reduces bank lending. On the other hand, as the graph show, the official forecast for the interest paid on these reserves is likely to increase considerably in the coming years, mainly because the Fed is now increasing the interest rate. Politically, this is a hard-seller, albeit Trump might not be very worried about this. Who knows.

Not the answer you're looking for? Browse other questions tagged monetary-policy federal-reserve or ask your own question.

3
What might happen if the Fed stopped paying interest on excess reserves?
9
Is the Federal Reserve issuing money in a fair way?
4
Why doesn't the government create money, spend it for free without interest, and recollect it with taxes?
2
How does the Federal Reserve reduce "excess reserves"?
3
Are Open Market Operations a Gift to the .1%?
1
How does the Greenspan/Bernanke Put semantically relate to put options?
3
Do open market operations permanently increase the money supply?
0
Why is the Fed worried about short term interest rates going negative?
0
During QE what prevents the banks from selling government debt to invest in the stock market instead of lending out the money?