Most airlines board passengers starting from the back of the plane and then working their way towards the front (after boarding priority classes and passengers).

In an episode of Mythbusters, Adam and Jamie tested the myth that the boarding strategy favoured by most airlines, back to front, is the least efficient.

The myth was confirmed, and these were the results: 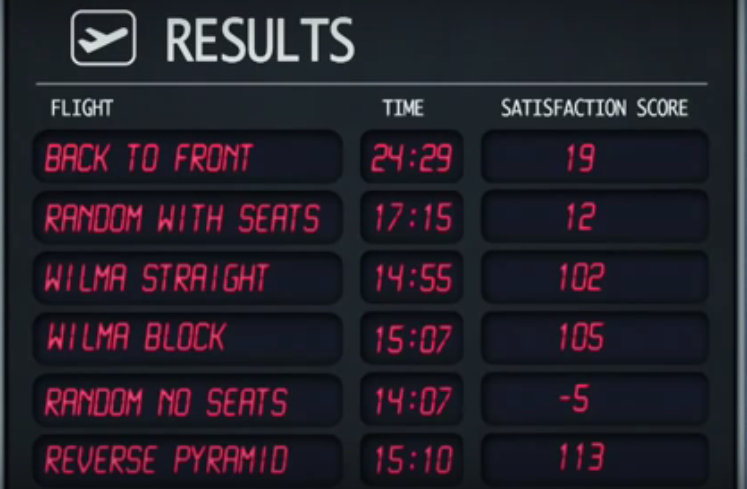 The highest satisfaction score is given by the reverse pyramid strategy even though it is the fourth fastest.

How might one determine the optimal boarding strategy based solely on times and satisfaction scores given (not including advanced stuff like computing expected aisle or seat interferences)?

I can't seem to think of any kind of unit conversion except to convert the time to seconds and then multiply it with satisfaction score so it's like we're trying to maximise the product of time and satisfaction score:

What else could be done? All that seem to come to mind are products so perhaps I might maximise anything like these:

I was suggested z-scores or something so I tried standardising, I think:

Why did the sum of squares of z's turn out to be 6? Did I do something wrong? Is that the fourth moment or something?

I would start with your generic $$f(t,s) = t \times s$$ and, instead of add weights or factors to this, I would add other variables related to time and satisfaction like:

and I would start assigning weights while conducting some more simulations (I understood that Mythbusters example refers to single trials only for each strategy).

In my opinion, advantages / disadvantages are not coming from equations itself but from the methodology. Without more robust experimental data, all equations above, and even more factors, are arguable and contestable.

I also would not add "money" in the model, but rather added value for the airline vs added value for the passenger, and things will easily escalate: you may find that keep people stuffed in tunnels and in line waiting to enter the aircraft, or waiting in airports for delays or flight cancellations, can increase exposition time for advertisement boards, therefore potential revenue for airport services, therefore ...utility functions of delays.

4
Swanson and Williams (2014): restricting based period response to one
0
Optimal spending over several periods with log utility and uncertain lifetime
1
Optimal point and MRS
1
Find Pareto optimal allocations and the core for the following economies
1
Lagrangian multiplier and optimal bundle
1
Optimal consumption for infinite number of periods and exogenous income