Is a 'Brexit' really that bad?

There seems to be a lot of fear that a Brexit will have a very bad impact on both the European and the British economy. Why would this be, does a Brexit imply that there will be less trade between EU-countries and Great-Brittain, why is this?

The economics have been assessed by a large number of economic specialists, including the very well-respected and independent Institute for Fiscal Studies.

What would Brexit (meaning the UK leaving the EU) mean?

Well, firstly it means years of uncertainty, while replacement trading arrangements are negotiated - typically that takes somewhere in the region of 10 years. The Doha Round of trade talks has been going on since 2001.

Free access to the European market depends on accepting some specific rules that the Brexit campaign consider to be unacceptable, such as the free movement of labour. And it requires membership either of the EU, or of the European Free Trade Area (EFTA). On leaving the EU, UK membership of the EFTA would require EU approval, and the German Finance Minister Schäuble has made it clear that he considers that that would not happen. So one thing that the Brexit campaign and the EU heavyweights should agree on is that the UK would not be a member of the European Economic Area, and that means trade tariffs. A Brexit would be an existential threat to the EU project, so it will be in the interest of its remaining members to make exit as painful as possible, to preserve the unity of the remaining 27. And EU27 trade with the UK is a very small proportion of EU27 total trade, so it's a cheap price to pay.

summary of all effects

The IFS summarises the effects, and the vast majority of specialists predict negative effects at least out to 2030. Here's their summary, from p18 of the report linked above: 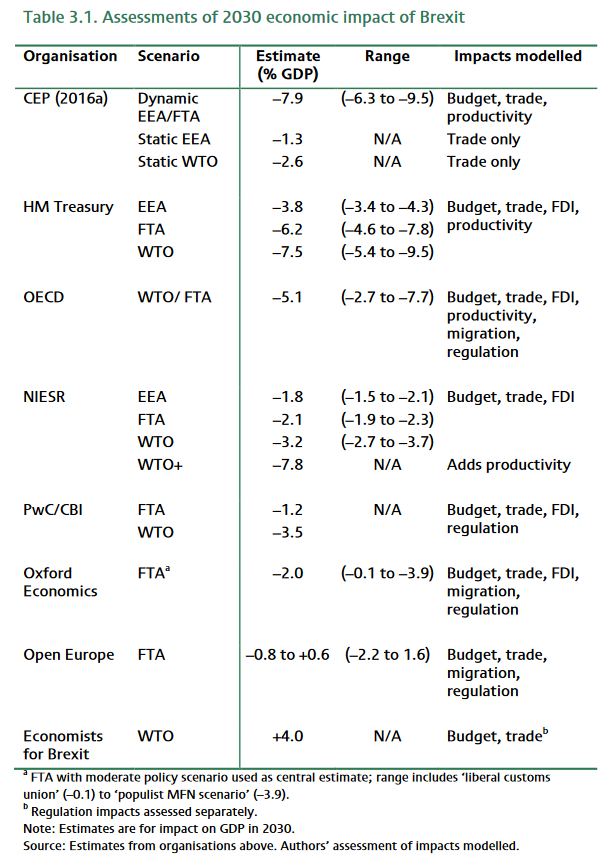 It's worth noting that it's not only UK's trade with the EU that would be harmed. The UK has trade deals with much of the world because it is a member of the EU. Without that membership, it would need to negotiate its own bilateral trade deals: such negotiations will also typically take a decade. So the UK's trade with non-EU countries would be reduced too. And there's the reduced economic efficiency of having a much smaller pool of talent to draw on for the workforce. So the numbers in the table above may (depending on the scope of individual studies) include those effects, as well as the EU-trade effect.

Not the answer you're looking for? Browse other questions tagged macroeconomics international-trade or ask your own question.

14
Should Finland leave the eurozone?
3
The economics of a “no deal” Brexit

6
Why could interest rates go up if Brexit happens?
6
Is manufacturing automation really a bad thing for the economy?
3
Question about tariffs in Henry Hazlitt's Economics in One lesson
3
The economics of a “no deal” Brexit
0
Does diminishing government spending lead to a reduction in trade deficit?
2
Is it bad for the economy of a country if forreign firms buy companies?
3
Is there a way to adjust trade data between China and EU member countries for the Rotterdam effect?