How did Brexit wipe $2 trillion off world markets?

I read here (https://www.theguardian.com/business/live/2016/jun/24/global-markets-ftse-pound-uk-leave-eu-brexit-live-updates) and elsewhere that Brexit wiped \$2tr off world markets.

How did that happen?

Is this equivalent to \$2tr worth of a certain good, sinking to the bottom of the ocean?

Think about it this way:

You own 100 houses on a private island in Italy. These houses could be sold for $1 million each.

All of a sudden, the Italian prime minister outlaws all boats. There is now no way to get onto the island apart from swimming.

Your houses were originally worth \$100 million in total (that's how much you would have got if you sold them) but are now only worth $20 million. You have 'lost' \$80 million.

In Brexit, instead of houses, we have stocks. These stocks were originally worth a certain amount of money. When Brexit occurred, people no longer wanted to buy or own British things, because they thought that they would be worth less. The total value of British things dropped by $2 trillion. It's important to note that the things are still there (the stocks didn't disappear!) but are simply valued less to investors.

It happened because expectations of future profitability were downgraded.

No, it's not equivalent to \$2tn of goods sinking to the bottom of the ocean, for two reasons. Firstly, there's no effect on any present tangible material. And secondly, the change could be reversed by some other change in expectations of future profitability.

The two trillion they refer to is Market CAP of public traded companies, thus they literally say it devalued the stock market for two trillion dollars.

Anyways, there was a lot of leveraged speculation involved and / or institutional investors, i strongly doubt the average joe sat awake at night (in Europe) and just waited to press sell (and everybody in the same 5 minutes).

Joking by side - my indicators drew the picture that in majority only stocks included in indices where sold off.

In the end it appears that leveraged speculation wiped of a large part of that stack (to speak in that language), even "solid" names dropped on EU open up to minus 20% (villeroy & boch ag for example, just to climb back to minus 2% (FLASH CRASH INDEED) ) -- it also appeared that leveraged speculators sold pound vs gold once it was clear that leave wins the vote..

Of course while the initial reaction appears to be facilitated by leveraged HFT, the brexit is expected to have negative consequences for trade in the UK and for EU countries. There is no fixed plan how the brexit would happen and if tariffs and trade deals change in a negative way for the economy. For the long run there are also talks about loss of GDP between ~ 6-9% (All speculation, the guy with the crystal ball please raise your hand).

Heres a screenshot of a chart from a portfolio that relocated into oversold solid stocks on the dip on EU market open, went from roughly minus 10% in the green... 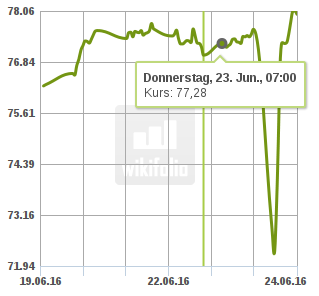 9
How did the Bail-In in Cyprus Work?
7
How did reducing the employment gender gap impact the US economy?
4
How did 'crisis' spread through the financial system in '07-'08?
2
How did the Plaza Accord revalue the Japanese Yen?
0
The Fed has a $4.5 trillion balance sheet: where did they get that money?
5
How, with complete markets, do we have a representative agent?
2
How exactly did Venezuela's economy fail?