In classical macroeconomics, why Labor supply responds to real wages and not money wages?

real wages = money wages/price(P). what are the assumptions here? why labor doesn't respond to money wages ?

To begin with, economics is all about assumptions. Because of classical dichotomy, money level doesn't impact the growth of an economy in the long run. Money has no effect on GDP in classical macroeconomics. If you want to model the effect of money, you have to introduce nominal rigidities in your model. That means, at least the goods market or the labour market is NOT perfect. If labour responds to money wages, the result would be a prefect market situation.

According to Keynes (General Theory, 1936), the nominal wage (money wages) is completely unresponsive to current-period developments (at least over some range):$$W=\bar{W}$$ As you can see, because nominal wages are sticky, the result is an imperfect labour market. Because the labour market is imperfect, there is unemployment. The labor market has some non-Walrasian feature that causes the equilibrium real wage to be above the market-clearing level. In Keynes's model, aggregated labour supply is given. Firms are competitive and their prices are flexible, and so they hire labor up to the point where the marginal product of labor equals the real wage: $$F'(L)=\frac{\bar{W}}{P}$$ 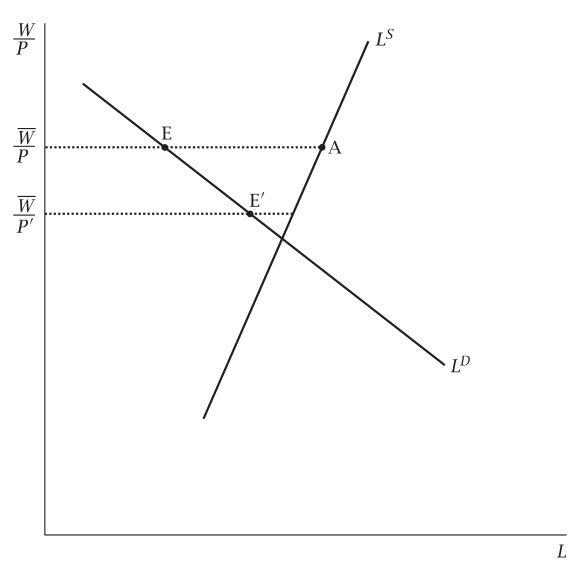 The main conclusion of Keynes' model is that GDP and real wages are countercyclical. Later, it was turned out to be moderately procyclical by empirical research.

If you want to model nominal effect, you should take note of nominal wages. If you are modelling fiscal shocks without the effect of the money, then considering real wages are maybe enough. It depends on one's research philosophy.

Not the answer you're looking for? Browse other questions tagged macroeconomics classical-economics or ask your own question.

5
What is the logic behind this sentence in Keynes's General Theory?

5
why is real wage divided by marginal product of labor often called real marginal cost?
2
Medium run conclusions from Okun's Law and Expectations-Augmented Philips Curve
2
Why does an increase in money cause a proportionate increase in price level according to classical/neoclassical economists?
4
Why is the money supply perfectly inelastic?
0
Why are the concepts of short-run and long-run equilibrium exclusive to aggregate supply and demand and macroeconomics?
0
Why real wage equals marginal product of labor when return to scale is constant?
2
Real Income and a Fixed Money Supply
0
Real wages fluctuation as per classical economics