In an answer to one of my other questions: Why does falling global bond yields signal coming deflation, the answerer states:

I cannot see the mechanism as to why if central banks set rates in positive territory when long term bonds yields are negative how this will cause the yield curve to invert.

I cannot see the mechanism as to why if central banks set rates in positive territory when long term bonds yields are negative how this will cause the yield curve to invert.

Remember, central banks set the interbank overnight lending rate as a matter of policy. In the U.S., this is called the Federal Reserve Funds Rate. This is the shortest possible maturity. So this is the leftmost point on the yield curve.

By contrast, supply-demand equilibrium (i.e., the market) sets long-term bond prices. And, as we know, bond prices are inversely correlated to their yields. So when the market demand increases for long term bonds, their prices rise and their yields fall. 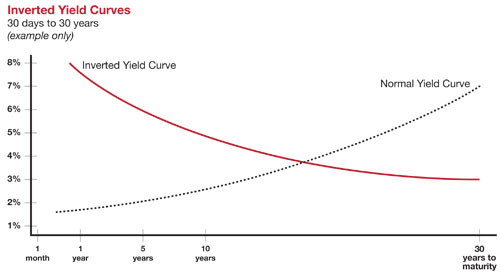 Not the answer you're looking for? Browse other questions tagged finance central-banking financial-markets bonds or ask your own question.

4
Why does falling global bond yields signal coming deflation?
1
Wealth effect from OMO
0
Forward rate discounts
0
Can central bank interest rate hikes lead to a price gain in equities?
4
Why is an inverted yield curve NOT a good predictor for recessions except in the US?
0
What is the Relationship between expected return and risk of corporate bonds?
0
Most significant factors in the price of a goverments bonds
0
Ambiguity on a relation between inflation, interest rates, and central banks
0
Seemingly contradictory relationship between bond yields and economic growth?
0
How are sovereign bond interest rates determined?