Is my logic on taxation for this question legit?

At Fenway Park, home of the Boston Red Sox, seating is limited to 39,000. Hence, the number of tickets issued is fixed at that figure. Seeing a golden opportunity to raise revenue, the City of Boston levies a per ticket of 5 bucks to be paid by the ticket buyer. Boston sports fans, a famously civic-minded lot, dutifully send in the 5 bucks per ticket. Draw a well-labeled graph showing the impact of the tax. On whom does the tax burden fall - the team's owners, the fans, or both? Why?

Now, for this question, my take is that the tax burden fall on the fans, because the fans paid 5 bucks extra on tax, and the government imposes a 5 bucks tax. Hence, it doesn't affect the sellers/team's owners. But from what I've learnt is that tax burden is shared amongst sellers and buyers.

I'm equally confused. If it's shared, then who gets to decide the amount buyers and sellers have to split for the tax burden? (If the amount is not provided?) Thank you.

The burden of taxation is shared among suppliers and demanders according to the price elasticities of supply and demand. The more elastic side carries less of the tax burden.

To understand this, note that the tax effectively increases the price demanders pay and decreases the price suppliers get. Elasticity tells us how demanders and suppliers react to this price change. For demanders this means buying less and for suppliers it means supplying less. If you are more elastic then you react to the tax more (by definition of elasticity), which means you avoid it more.

You could imagine a similar argument, where the supplier produces less because of the tax, thereby causing prices to increase and hurting the consumer.

In your case the producer is totally inelastic, while consumers have some elasticity and hence carries the burden of the tax (as he cannot react and reduce the number of seats). 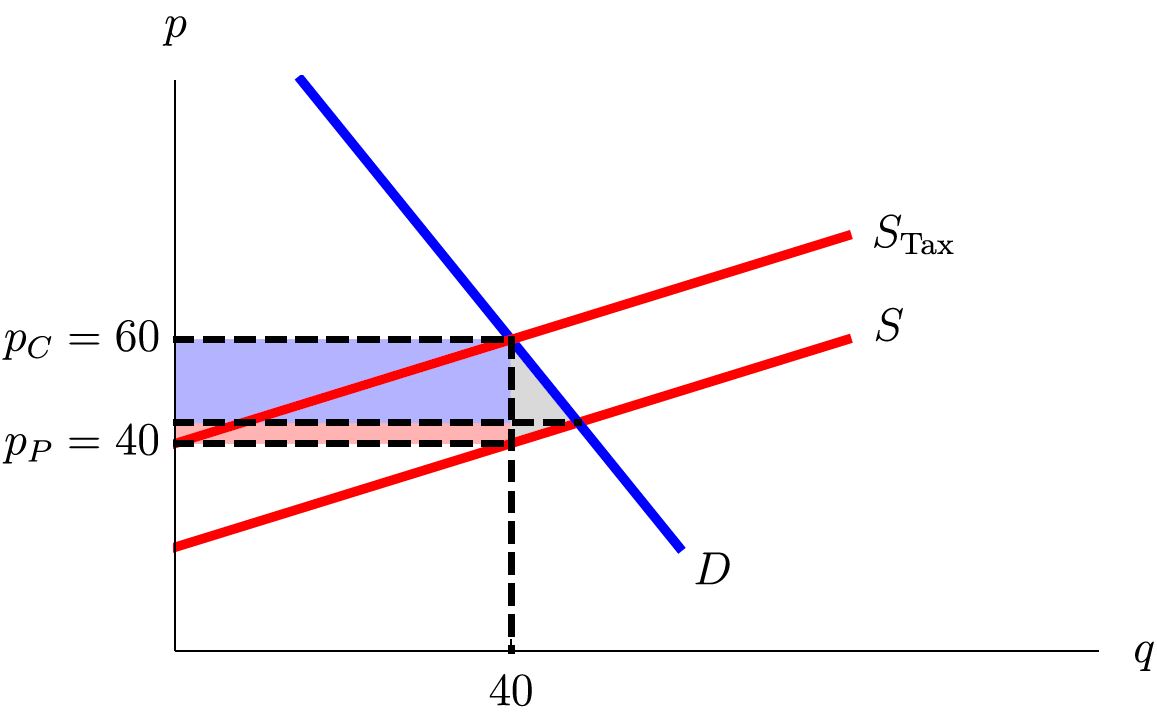 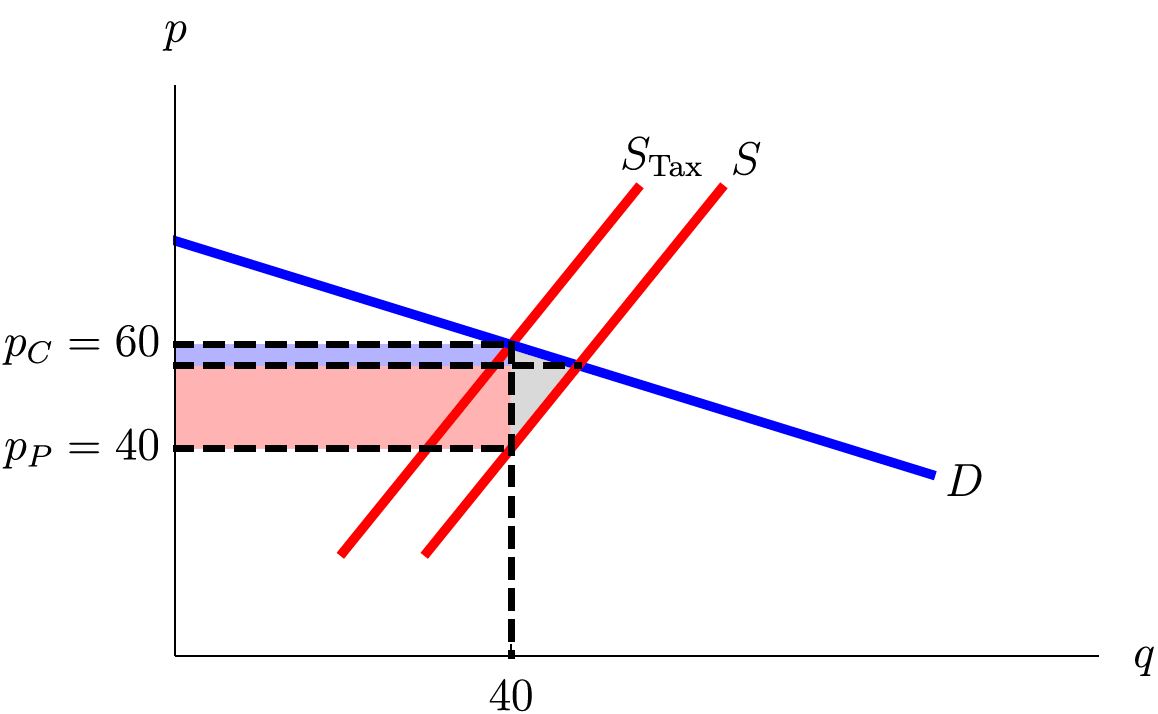 It depends on whether all the tickets are sold or not. If sold out, all the the tax burden is borne by the buyers. If not, then it's shared.

If sold out, buyers pay all the tax.

If all 39,000 tickets are sold, then your reasoning holds correct. The revenue the owners receive with the tax will equal the income to the owners without the tax.

If not, the tax burden is shared.

When the stadium does not sell out, then the price elasticity of demand kicks in and causes both parties to share the tax burden. Keep in mind, the ticket sellers still earn the same amount per ticket, their shared tax burden (economic loss) comes from a reduced number of ticket sales due to the increase in ticket cost paid by the ticket buyers. The reduction in ticket sales represents a cost of lost opportunity of a perishable asset (i.e., the unsold tickets).

The amount the buyers, in aggregate, reduce their ticket purchases will be proportional to the price elasticity of demand.

The below diagram shows the impact of taxation on ticket sales, price and quantity sold.

Ticket buyer: Because he paid $5 extra to buy the ticket.

Ticket seller: as @Mowzer said, if the event wasn't sold out, it is possible some tickets weren't sold that would have been sold at $5 less, so the seller lost on those.

Hot dog vendors: some of the ticket buyers would have bought more from the vendors had they not paid the extra $5, so that cost fell on the vendors too.

Cab drivers: some of the ticket buyers would have spent a few bucks on a cab after the game had they not paid the extra $5, so that cost fell on the cab drivers too.

Children of ticket buyers: some of ticket buyers would have spend a few bucks on ice cream the next day for their kids had they not paid the extra $5, so that cost fell on the kids too.

And for those frugal buyers that would have saved the \$5 in their savings account, that is \$5 (times the number of such savers) that won't get lent out by the bank to a small business, hindering productivity increases and slowing down a growth in the standard of living that is brought about by such economic growth.

Not the answer you're looking for? Browse other questions tagged microeconomics taxation public-economics or ask your own question.

10
Optimality of Zero Capital Taxation
6
Policy relevance of the optimal taxation given uncertainty about social welfare specification
0
Question on profit maximization with government taxation
1
Which countries impose family income taxation?
1
Can a progressive marginal taxation be regressive in terms of average tax rate?
1
Show that this income tax is effectively a lump sum tax