I have run a VAR model, and done granger causality tests (results pasted below) and am trying to answer a textbook question which asks:

Is there any variable that appears to be close to being block exogenous with respect to the other variables? In any case, what does this mean? 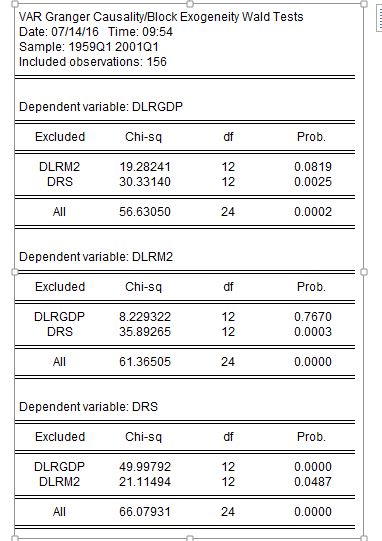 To me it seems like DLRGDP is the closest. Exogenous means that one variable is not affected by changes in the other variables The p-values on the DLRGDP seem to indicate that we cannot reject the null hypothesis that DLRM2 does not granger cause DLRGDP. But the p-value that DRS granger causes DLRM2 is fairly low, at 0.0025.

What do you think, are any of these variables close to being block exogenous?

A variable is block exogenous, if it does not Granger cause ANY other variables of the VAR model.

In your case, the direction of the Granger causality is the following:

As you can see, every variable Granger cause at least one other variable. There's no block exogeneity in your VAR model.

Checking the p-values, I would suggest that in the first and second tests, the variables DRLM2 and DlRGDP have granger causality issues (since we reject for a 5% sig. level).

In the third case, DRLM2 is not rejected for a sig. level of 5%, yet, it seems to be very close (4,8%). I don't think there's any particular meaning to having a near non-rejection area. Remember that if you draw the chi-square distribution and use the 1% sig. level for the test, you will not reject the granger causality.

Not the answer you're looking for? Browse other questions tagged macroeconomics econometrics time-series or ask your own question.

3
What value does one set, in general, for the null hypothesis of $\beta_0$ ("Y-intercept")?
1
Statistical tests/models to use for Macroeconomic and Financial Research
1
Econometrics: Omitting a significant variable
1
Two Endogenous Variables and Two Instruments
2
How do I predict Macroeconomic indicators?Or are there any free resources where I can get the predicted values?
4
Skepticism about the claims of instrument variable validity/exclusion through a statistical test‚Äîthe Arellano-Bond Test
0
Economic and Statistical Significance Of Coefficient
0
Interpreting an ADF test in R
1
Interpreting ACF Plot if all its variables exceed confindence interval