Is there any well known study that links government debt to tax rates? I have been searching the literature for some time now and haven't found any.

Looking across countries, there is not much of a relationship. 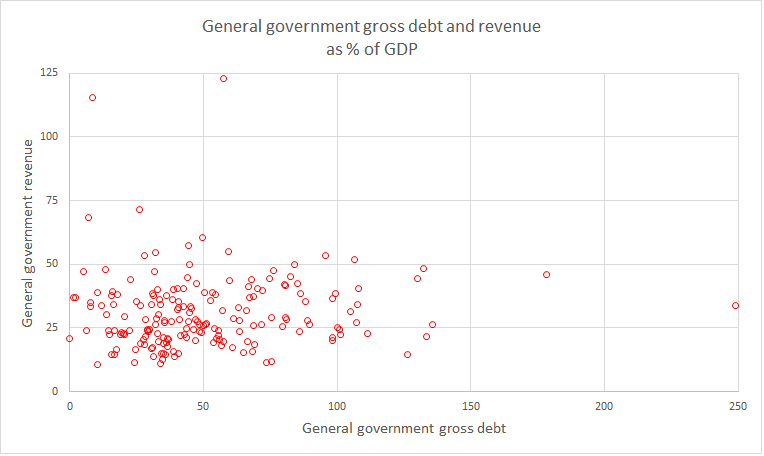 The extreme debts are for Japan and Greece, while the extreme revenues are for Tuvalu, Kiribati, and Micronesia (foreign aid related), and Kuwait (oil revenues/taxes). Hong Kong, Brunei, and Saudi Arabia have small gross debts while Nigeria and Bangladesh have the lowest revenues. But even without these special cases the relationship is weak.

You could instead look at individual countries over time, but some of the relationship may be cyclical (either political or economic) as lower debt encourages lower future tax rates, but lower tax revenues can lead to higher future debt rates.

Not the answer you're looking for? Browse other questions tagged taxation government-debt or ask your own question.

4
What happens to undated government stocks when interest rates dip below the coupon rate?
1
Why is the purchase of assets not entirely tax-exempt in the year of purchase?
1
Financing U.S. government budget deficits, and their impact on interest rates
2
Government debt and Fiscal Theory of Price Level
1
Government debt constraint
5
Do governments issue debt at low r to pay debt with high r?
0
How does high U.S. federal debt affect its citizens?
1
Economic indicators for government debt (sovereign debt)