Why is the money supply perfectly inelastic?

2) no excess currency in circulation

Real money supply (Ms/P) does not change with with a change in the interest rate, thus perfectly inelastic Ms

This is the part I don't really get. If money supply is determined by the central bank/government, does my notes have any connection to understanding why money supply is inelastic? 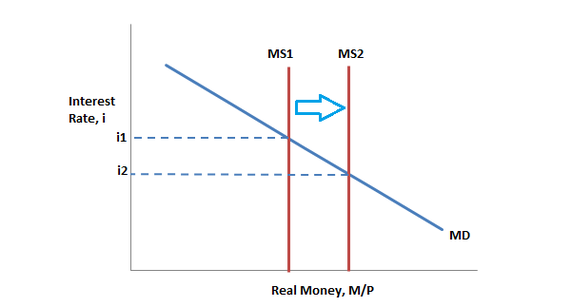 It seems to context of your question is the IS-LM model, where your question is specifically about the LM. In the Hicks (IS-LM) view of the money market, the nominal money supply is fixed, as it depends directly on the amount of money printed by the government (although now we tend to think in terms of the central bank) and not on the actions of the other agents of the economy. As such, it is a defining assumption and exogenous to the dynamic of the model.

Now, notice that the real money supply could change when prices move. In the IS-LM context, this could be due to an increase in government spending financed via taxation, where a multiplier higher than one leads to an expansion of aggregate demand and, in the short-run at least, a boom and an increase in the price (assuming a positive sloped aggregate supply).

where $\phi$ is the money multiplier and $B$ is the monetary base. A government/central bank can directly alter the the latter by printing money or buying/selling short term debt. It can also affect the multiplier by altering banking regulation like maximum reserve ratios. But, importantly it is the action of bankers and the agents in the economy that determine the value of the multiplier (e.g. via lower lending or more demand for currency, respectively). So, in the end, the money supply does not depend only of the government or central bank agency but of the rest of the agents too.

Not the answer you're looking for? Browse other questions tagged macroeconomics interest-rate money-supply money or ask your own question.

7
How is the interest on fractional reserve money creation paid?
8
How and when is M0 money created?
3
Money supply control vs. interest rate control
0
How does an elastic Money Demand affects the effectiveness of fiscal policy?
4
Why does a decrease in interest rate reduces the velocity of money circulation?
0
exchange rate and domestic money supply part II
2
The sequence of Money Supply - Interest Rate
2
interest rate and money supply
2
Is the money market model based on assumption of no interest rate targeting on the part of the central bank?
1
Chain effects when Money Demand is greater than Money Supply