Question about Changes in Surplus

Will Both Consumer and Producer Surplus decrease as a result of a decrease in demand? Or is this not possible?

Assuming there is a decrease in demand for travel, I'd like to know how this affects both types of surplus.

Simply shifting the demand curve down will typically reduce the combined surplus, especially the producer surplus. But you could devise two non-parallel demand curves, one below the other, where consumer surplus rose, for example like this: 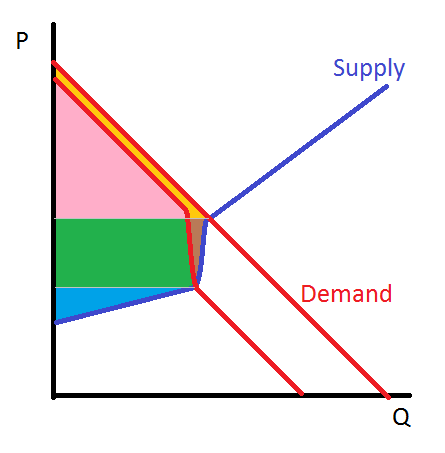 If the demand curve fell from the higher to the lower red curve, than the combined surplus would fall by the orange and brown amount while the producer surplus would fall by the green and brown amount. But the consumer surplus could rise, providing that the green amount is larger than the orange amount. You could achieve this without such kinky curves, but it might not be so obvious.

If consumers' tastes (or utilities) change then with a constant budget constraint, demand could increase for other products, raising the combined surplus for those.

4
Equilibrium price and quantity - consumer and producer surplus
2
Consumer Surplus question
1
How does the monopoly's deadweight loss affect market surplus and the economic pie?
4
Question About Basic Supply/Demand Concepts
5
Is consumer surplus subjective?
1
Would Pilots and Air travel be considered complementary?
1
In demand and supply chart, why is it assumed that import will only happen if domestic suppliers are unable to supply?