My question is about gold standard. But not the version I always see mentioned (trading bills for gold at a set price). I mean having gold coins in circulation.

For example, new currency consists entirely of gold coins (various sizes/purity diluted with worthless metal). The ratio is 1¢/mg with coins ranging from 1 cent to 100 dollars (worth roughly 5x that in current money). The 100 dollar coin maybe being pure gold (quarter-sized, used mostly for saving).

This system seems to have a few good advantages. Simple to understand, minimal inflation (I think), people owning real value instead of worthless paper/plastic being trusted etc. How well would this system function and what possible problems are there with it?

Here are three types of money:

A fourth type that is emerging (e.g., in the form of Bitcoin) has no intrinsic value and no official backing from government. It is accepted in exchange solely because people believe that will be able to spend it again in the future.

The physical burden of physical money

Firstly, there is a serious practical problem associated with commodity money in its purest form, namely that transporting and storing the money is difficult and expensive. If I want to buy a house, am I supposed to work around with half a million dollars worth of "stuff" in a briefcase and hope nobody steals it? What if I want to buy a book from Amazon? Do I have to send them some gold coins in the mail?

At the very least, these considerations are going to compel people to use representative rather than commodity money.

The problem of debasement

Where commodity money has been used historically, it has been exposed to the problem of "shaving". Since the currency is intrinsically valuable, there is an incentive to shave a tiny amount off of each coin (such that the difference is indistinguishable from normal coin wear) and melt those shavings together into a piece of precious metal that can be sold. You can read more about this here.

Imposing a commodity money would take from the government some valuable tools to deal with economic shocks. In particular, it reduces the ability of the government to use monetary policy to reduce the real effect of economic downturns. For example, during the most recent recession, major governments engaged in "quantitiative easing", which saw them creating new money to stimulate the economy. This would be much more difficult if creating new money meant having to dig a significant quantity of gold out of the ground of another country.

Additionally, it is not obvious how big/genuine the advantages you describe are. For example, here is a plot of US inflation: 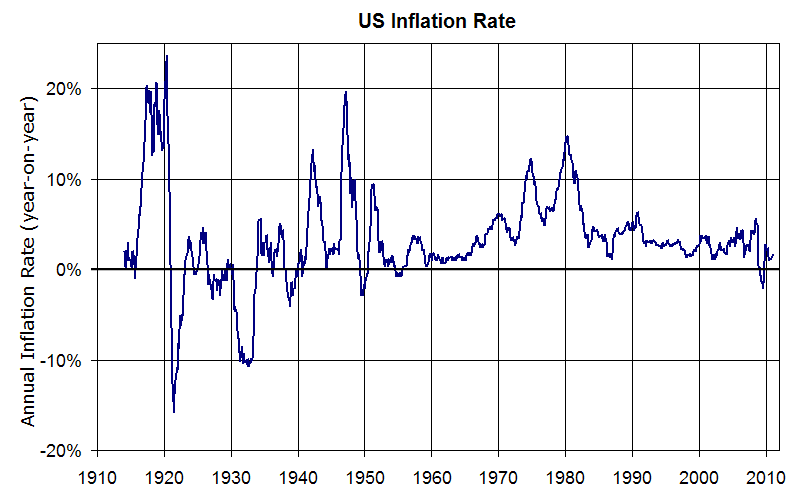 Note that inflation tended to have higher peaks and be much more volatile during the first half of the C20 than in recent years. But that was exactly when the gold standard was in effect and the value of currency was directly tied to a physical commodity. Also, deflation was more common then, which is problematic because deflation has a number of damaging effects on an economy. Modern policy makers are better able to regulate the money supply to control inflation and keep it around the low and stable levels thought to be optimal.

People might be more willing to trust commodity money. But they would have to overcome concerns about counterfeiting and debasement. Recent experience from the last half century has been that people in stable democracies are, in fact, quite willing to trust fiat money.

This question rises from confusion about basics. I'm going to cite some answers I've placed elsewhere, hopefully this gives a sufficient base such that you can answer this question on your own.

Having all these out of the way, what's left of your advantages?

I don't think that 1. is important. People are holding money, none of my non-economists friends is telling me that they want to hold less money/cash because they don't know how the value is determined.

In fact, as long as the government enforces some payments through cash, the value of money is determinate and strictly positive (Oberg and Malmberg, 2016). From the abstract:

This shows that in the basic setup,tax requirements provide a simple mechanism for price level determination.

In fact, quite oppositely, bitcoin is a new thing - despite values of bitcoins being determined is much more complicated than that of cash. It is exogenous, I grant you that, but the algorithms behind are much more difficult to understand than "Some guys in a central bank decided to set this lower bound onto the interest rate".

Your 2. is actually a bad thing, in my opinion. First, as in the links above, fixed currency, fixed exchange rates etc. are all extremely worrisome. Not without reason did almost all of the currency regimes fail, and countries that left fixed exchanges rates did better later on.

Also, you're wasting a lot of gold! Value of gold (and silver) is already increasing, partly because of increased use in technologies, also because a rising middle class in Asia. Now imagine reducing Gold even more because people start holding it to use it as cash - horrible.

Summa summarum, I don't see any of the advantages that you propose holding up. (Fixed) low inflation, if true, actually is really dangerous and disadvantage.

Not the answer you're looking for? Browse other questions tagged currency money-supply money or ask your own question.

25
Is zero inflation desirable?
25
From an economics perspective, what are the ramifications of a currency with fixed money supply?
8
What would happen if the world switched to a single currency?
1
Why switch from Gold to Fiat

4
Could money be tied to a basic good like the gold standard?
8
What would be the effects of an expiration date on currency?
1
Federal Reserve Notes vs Coins
2
What was the reason behind destorying or re-minting counterfeit gold coins of the same karats as the real ones?
1
What effect would destroying large amounts of physical currency have on government finances
1
Why is Japanese Currency tied to gold?
1
Gresham's Law applied to wampum and gold/silver coins in the 1600s
19
Why do different countries have different currency?
3
Why are there (still) coins?