This is my professors answer to the question.

And because change is nominal variable does not change real variables, real interest rate remain the same, therefore inflation must decrease.

Lower nominal interest rate leads to a lower opportunity cost of borrowing, which in turn increases investment and consumption, which leads to a higher GDP. 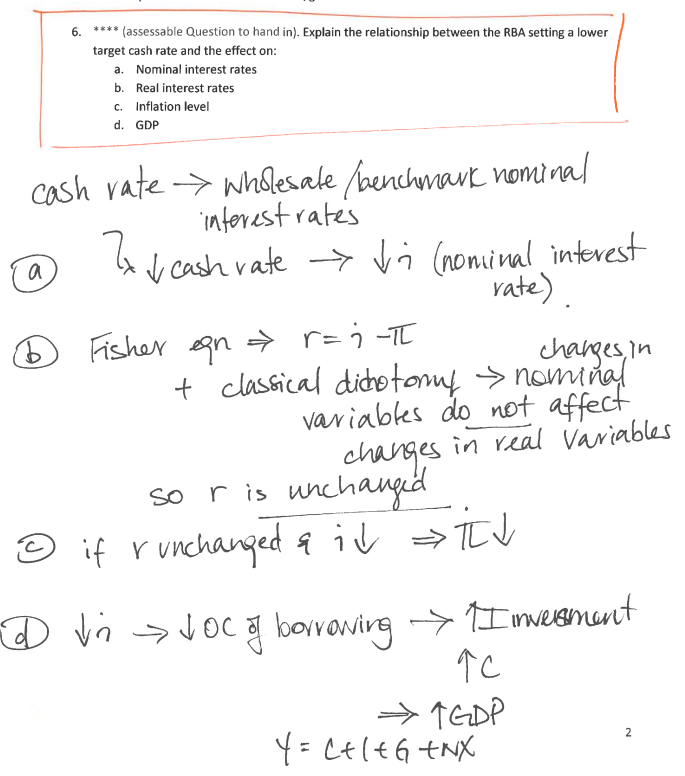 Her answer seem to be very different from what I learn in macroeconomic course, where monetary expansion using the LM-IS AD-AS models. Which monetary expansion would lead to higher inflation in both the short run and the long run.

Is her answer correct in any economic sense?

In a nutshell, I think you're right.

In the medium run, with output above its natural level, wages will rise due to a shortage of labour and thus prices will increase further. This happens until output is back at its natural level. This increase in price reduces the real stock of money as well, so that the nominal interest rate returns back to its original level according to the Investment-Saving relation (a leftwards shift of money supply in the money market).

In the long run, with prices stable at a higher level, there are no further increases in prices, so inflation becomes 0. (This is a static model, whereas in the real world the economy is dynamic and constantly experiences price increases.) Thus, real interest increases back to its original level.

Milton Friedman would be absolutely shocked by the title of your question. According to his view, Monetarism, and the Quantitative Theory of Money, inflation is always and everywhere a monetary phenomenon... But this relation is positive.

The basic equation is:

where Q is real output, which in the long run is given by technology and factors of production, P is aggregate prices, M is money base or money supply, and V is the velocity of money.

Taking V constant (not accurate but simple), and Q as given by real factors, then monetary expansions lead always to inflation. This is the opposite to your initial claim.

This story is of course specific to monetarism, and a key foundation of the classical dichotomy. Keynes and Keynesians argue that monetary policy can affect real activity.

Regarding your teacher's answer, I think d) is wrong. Consumers and investors care about real interest rate, and not nominal interest rate. As such, GDP should not change. This is consistent with her previous assumption of classical dichotomy in part b).

3
Reactions of the Money Market
2
Stock Markets and Monetary Policies
1
Will inflation rise or fall when the Fed increase their interest rate?
1
Monetary Policy - How can increasing interest rates cause higher inflation in the short term?
4
Confusion about the effect of an increased expected inflation on the price level
0
what is the Relationship between Zero nominal interest rates and liquidity traps
0
How can we get negative **real** interest rate?
1
Which of the following is LEAST likely to be associated with a higher rate of economic growth?