Can CPI and real GDP have high correlation?

I have historical data where the CPI and GDP are correlated. Does this make sense? If not, how do I test for it?

There was a degree of economic stability between the UK's exit from the Exchange Rate Mechanism in 1992 and the World Financial Crisis in 2008: positive real GDP growth typically between 2% and 4% and low steady inflation typically between 1% and 3%.

The Governor of the Bank of England called this "The Great Moderation".

The effect is what you have observed: the level of real GDP and the level of the CPI both grew, apparently highly correlated with each other, as shown in the red line below based on quarterly data.

But this correlation was an artefact of each indicator growing itself over time and of auto-correlation, as well as not having a recession in that period or sudden spikes in prices; looking from 1991-2009 would have produced a less smooth chart.

If instead you look at the percentage changes over the previous 12 months, the apparent linearity collapses, as shown in the blue line below. 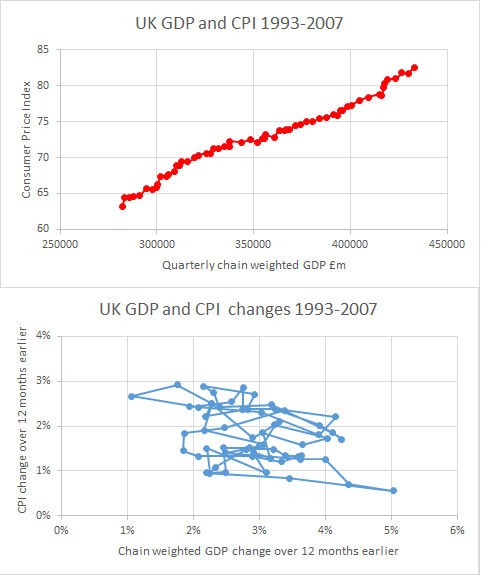 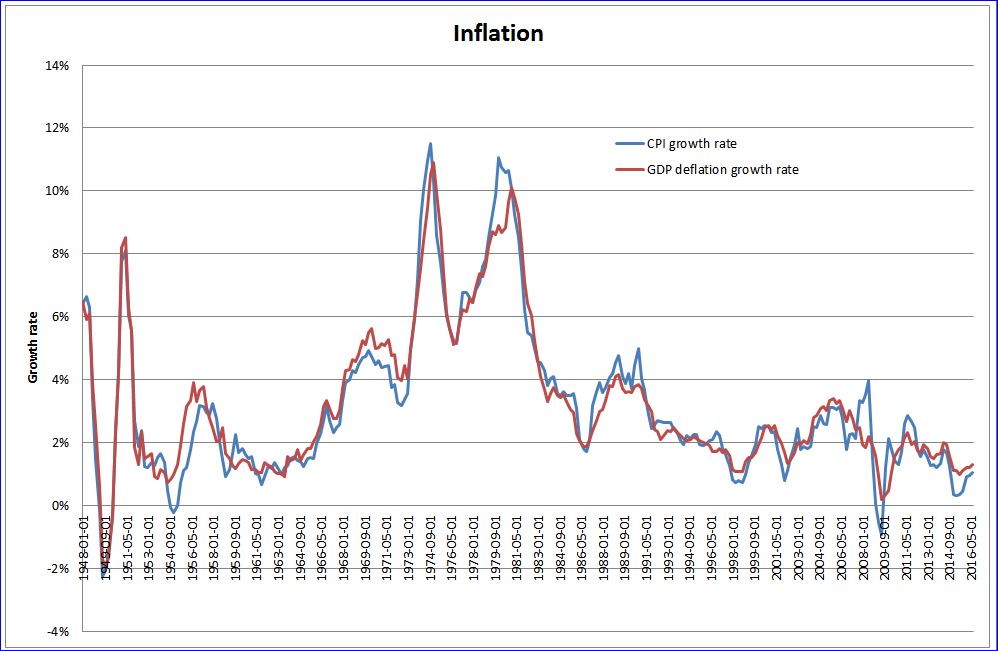 (my own plot, the series are from FRED database (GDPDEF and DPCERD3Q086SBEA), seasonnaly adjusted, growth rate between the same quarter from the previous year)

Having this in mind, recall that the real GDP is calculated as the nominal GDP divided by the GDP deflator. Thus the price of the domestic goods procuded and consumed in the country are in both CPI and real GDP. Here comes your correlation.

Not the answer you're looking for? Browse other questions tagged inflation gdp statistics or ask your own question.

3
Correlation between CPI and GDP

3
Correlation between CPI and GDP
3
Changing the base year of Real GDP from 2001 Euros to 1990 Geary–Khamis dollars
1
Real GDP explanatory variable
1
Real GDP Computation and Justification
1
GDP per capita and trade relationship
1
What does it mean when we talk about "same basket" exactly for both GDP and CPI?
2
Deflate level and flow variables using PPI and CPI
1
Correct formula for real GDP growth?