How wealthy are modern day humans compared to preindustrial times?

I'm mostly interested in how the discovery of natural energy resources combined with Newtonian physics influence on technology has changed the world in terms of relative worth of a human.

The kind of answer I'm looking for would be something like: We are 10, 100 or 1000 times more wealthy based upon x. X being what ever you use as a basis to create that comparison.

There is significant debate about whether such x exists.

For example Louis XIV had things in his estate that are not in mine (I do not have two palaces). But there are also things in my estate that were not in his. I have access to 21st century healthcare, dental care, the internet, I can flush after going to the toilet...whose lifestyle is 'worth' more?

The comparison gets more difficult the farther you go back. So hunter gatherers, with tribal ownership, without any currency and frequently without any sort of industry are probably uncomparable to modern humans via any 'wealth' based standard.

For comparison with mainly agrarian pre-industrial societies, it is possible to derive estimates of X from figures in the Maddison Project Database, which contains estimates of real per capita GDP at various historic dates for various countries. For the UK / England, for example:

For the US and predecessors:

However, such figures should be treated with extreme caution for various reasons:

As others noted, these kinds of things are extremely difficult to calculate because we don't have good data going back much further than the start of the 20th century and because it is hard to make a like for like comparison between modern and pre-industrial life.

But Brad DeLong has attempted to estimate global GDP over very long historical time horizons. Global GDP measured in 1990 dollars was \$41tn in 2000. DeLong's estimates put it at \$0.1tn in 1700. Thus, a crude estimate would be that the world is around 410 times as productive now as it was in the late pre-industrial era.

You can read more about these estimates in this paper.

Bear in mind that these figure are for the whole planet. The increase will be much steeper in rich western countries that have benefitted most from technology. 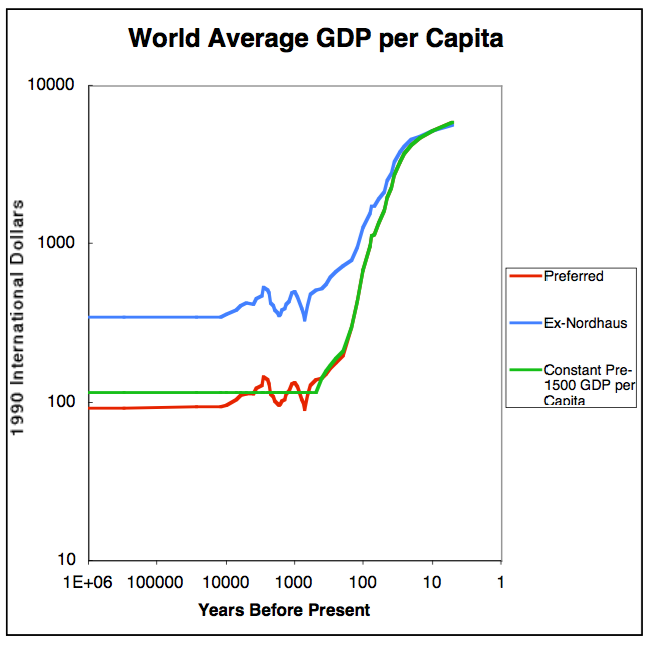 Not the answer you're looking for? Browse other questions tagged macroeconomics history or ask your own question.

4
How are disaster effects calculated into GDP?
1
What are modern examples of established economic theories being used on a large scale in real life?
0
What policies are in place to police financial speculation in the modern era?
1
How to convert an historic value denoted in foreign currency to a modern value in local currency?
4
How are historic economic statistics calculated?
3
Does Modern Monetary Theory (MMT) provide a useful insight into how to manage the economy?