I want to model an interaction between a government and its citizens using the game theory extensive form, but I want to express the posibility that the citizens don't act as a unique agent. For example, government imposes a new tax, some of the citizens pay it without problems, but others don't do it because socioeconomical problems.

Obviously, both situations can happen at the same time so in the extensive form there wouldn't be a unique selected leaf node. ¿Does this mean that I can't use extensive form in this case?

I'm looking for an example in the game theory literature, but I can't find anything.

There is no possibility to model a

Neither in the normal nor in the extensive game form. Different types of a player can be only be used if they are mutually exclusive. So suppose the citizens (one player!) can either be poor or rich and this may affect their pay-offs and thus actions. There is no possibility for the citizens to be poor and rich at the same time (while represented by the same player).

Your only option is to follow Sub-Optimal's solution and model different types of citizens as different players.

As Bayesian pointed out, you can then model simultaneous decisions by citizen 1, 2 and so forth by setting their information sets accordingly.

I am adding a new answer to make a different point. I am still not sure what exactly you want to do. You have not formally accepted one of the answers, so here I go.

Let me take your example of a government setting a tax. First the government sets a tax $t$. Then, there is a continuum of citizens of measure 1. Each citizen has a type $\theta$ and these types are distributed according to some cdf $F$. Let this type be a reduced form way to model the "socioeconomic problems " you mentioned. Let there be a function $\tau$ that maps each tax $t$ into a type $\tau(t)= \theta'$ that represents the cutoff type that can barely manage to pay the tax and all lower types cannot do it due to "socioeconomic problems".

You can easily draw the corresponding game tree with one node representing the population. However, the citizens are not strategic players here.

There are several examples in the literature. In the extensive game form, you can express that two different players move simultaneously by letting them move sequentially, but the later players do not observe what the previous player did. Strategically, it is equivalent whether the player move at the same time or whether one player moves first and the other player moves second without knowing what the first players did.

As an example, see the extensive game form of the prisoners' dilemma: 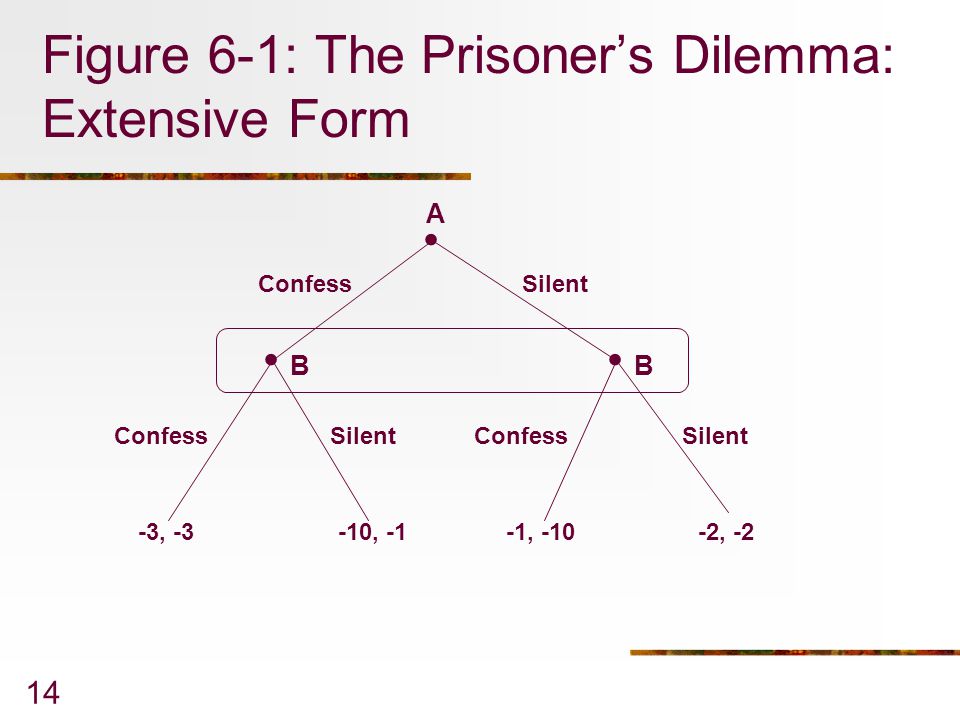 Prisoner A goes first, when prisoner B moves second the information set signifies that B did not observe what A did. I googled the picture: http://slideplayer.com/slide/3962169/

Yes, I think you can do that but that is going to make the tree very ugly. Say there are 4 players. P1 is government and P2, P3 and P4 are the population. Now first let P1 make a decision. Then let P2 make a decision under uncertainty using an equivalence class to make it simultaneous and then P3 and P4 in the same fashion. This will be an explicit way of doing so if you want to model a simultaneous move game.

You can also assume government to be P1 and the population as P2 which contains the three individuals. With this you will have to make all combinations of the state of P2 according to their action sets. For example, one state could be when one out of the three individuals accepts the tax law and the other two reject it.

Not the answer you're looking for? Browse other questions tagged game-theory extensive-games or ask your own question.