In his 1978 paper introducing the Tobin tax Tobin states that :

As a technical matter, we know that a rational expectations equilibrium on markets of this kind is a saddle point. That is, there is only a singular path that leads from disequilibrium to equilibrium. If the markets are not on that path, or if they don't jump to it from wherever they are, they can follow any of a number of paths that lead away from equilibrium - paths along which, nonetheless, expectations are on the average fulfilled.

He seems to consider this result as common knowledge among the economists and gives no reference. To which result or paper is he referring ? Do you have an idea of what he means with "markets of this kind" ?

Now, consider the following question. Starting from an initial value $x_0$, how many paths are there leading to the stationary point $x^*$? If there is an unique path going from $x_{0}$ to $x^{*}$, then your model is well behaved in the sense that you can track the vector of variables, $x_t$, along the transition without worrying which path you are actually on. This is the saddle-path stability case that you are referring to. On the other hand, if the answer is not affirmative, it means that you have at least two routes from $x_0$ to $x^{*}$. There is another case: no matter where you start from you eventually end up at the stationary point $x^{*}$, in which case your model is said to be indeterminate.

So you can think of saddle-path stability as a desirable feature that you would like that your model to manifest in order to analyze the problem at hand. For example, standard RBC models all posses this property.

There are some mathematical conditions that ensure the saddle-path stability.

For the details and more, check out the section 7.8 (The q-Theory Investment and Saddle-Path Stability) in Introduction to Modern Economic Growth (Acemoglu, 2009). 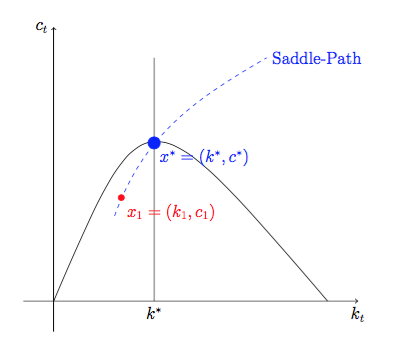 Ok, I'll try to explain intuitively for the Ramsey model (but it's not rigorous). Suppose that from the first order conditions, you can conclude that the equilibrium is unique and furthermore you can express consumption as a function of capital stock, that is $c_{t} = g(k_t)$, for some (smooth) function $g$. If that is the case, for a given initial capital stock $k_0$, you know how the economy is going to evolve. That is, if we denote the vector of variables by $x_t = (c_t, k_t)$, you know $\{ x_{t}\}_{t=0}^{\infty}$; because

Where will the economy be with this new capital stock?

Finally, a few remarks on the intuition behind the mathematical conditions ensuring saddle-path stability.

1) Note that, in the model we have actually two variables $c_t$ and $k_t$, but we have assumed that one of them can be expressed in terms of the other, so the number of free variables is reduced to one, which is $k_t$ here. Basically, in order to be able to do this, you want to have a smooth curve mapping capital stock to consumption, i.e. $g: \mathcal{R} \to \mathcal{R}$ is a smooth curve (1-dimensional manifold).

2) Once the economy is at $x_{1}$ after the shock, you want it go back to $x^*$ and this is related to the number of eigenvalues that are less than one in absolute value.

For precise statements (in a general environment) see Acemoglu as I mentioned before.

Regarding rational expectations(RE): it is a solution concept and RE alone does not imply saddle-path stability.

In fact, saddle path equilibrium is one of the most common equilibrium in canonical growth models, mainly in dynamic optimization problems. It is possible that he makes a reference to a decentralized equilibrium without cycles around steady state.

Otherwise, if there are cycles around a steady-state equilibrium. It means that there are oscillations (see indeterminacy and bifurcation issues for technical details), which means that your equilibrium is not a saddle path. (I skip the mathematical details for those technical terms, which is beyond the scoop of your question.)

In which situation, you don't have a saddle path equilibrium and some cycles around steady state ?

A decentralized market economy with externalities which are not taken into account by agents in the market can show indeterminate equilibrium. I think he makes reference to this kind of economy.

I quote one of their sentences from introduction. Then, you can look at references cited ;

"...Previous work on indeterminate equilibria has shown that stable steady states are associated with rational expectations models in which there exists a continuum of self-fulfilling belief-driven equilibria each of which is stationnary..."

Hope it answers to your question.