I'm reading the book "Economics of natural ressources and the environment" written by D. Pearce and R. Turner. They explain that the competitive equilibrium is not a Pareto optimum in case of (positive or negative) externalities. The example they use is a firm that has an activity Q and this activity creates some pollution. They illustrate it in figure 4.1 (figure below). MNPB stands for "marginal net private benefits" and MEC "marginal external cost". MEC is thus the extra damage done by pollution arising from the activity measured by Q.

The firm will try to maximize its benefit, i.e. reach an activity of Q$^\pi$. Q$^*$ is the level of activity to have a social optimum. I understand the reasoning so far.

What I do not understand is why Q$^\pi$ is not Pareto optimum. If we had to reach Q$^*$ from Q$^\pi$, the firm would loose some of its utility so Q$^\pi$ should be Pareto optimal. 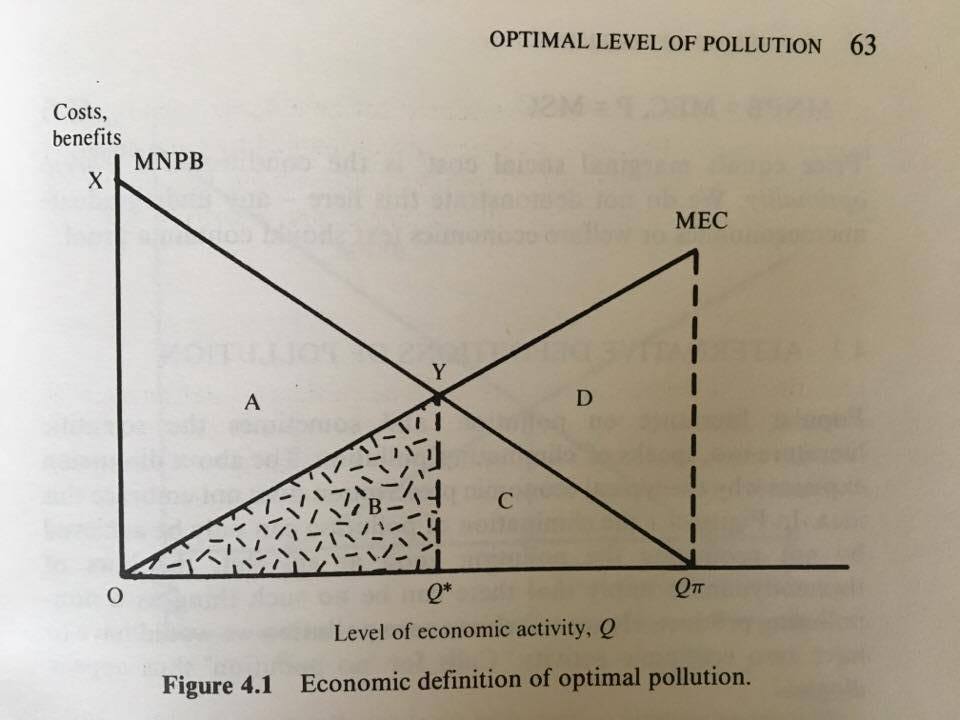 It's not you. There are different senses of the phrase "Pareto Optimal," and you have to figure out from context which one is being used. The dictionary definition of Pareto Optimal is something like "An allocation from which any feasible change which makes any agent better off makes at least one agent worse off." The word to keep your eye on is "feasible."

In particular, it makes a big difference whether or not you consider side-payments feasible. In your example, if it is impossible to make side payments from "society" (i.e. whomever is harmed externally by the production of the good) to the producer, then $Q^\pi$ is Pareto Optimal. Of course, with no side payments, every point between $0$ and $Q^\pi$ is Pareto Optimal.

Almost always, however, we implicitly assume that side payments are possible. In that case, the point $Q^\pi$ is not optimal. Why not? Well, we could move from $Q^\pi$ to $Q^*$. This would make the producer worse off by $C$ and "society" better off by $C+D$. Now, if it is feasible to make "society" pay the producer some amount between $C$ and $C+D$, then we can say that moving from $Q^\pi$ to $Q^*$ while compensating the producer at least $C$ at the expense of "society" makes everyone better off. The fact that you can move off of $Q^\pi$ while making everyone better off means that $Q^\pi$ is not optimal.

This actually leads into a common criticism of Pareto Optimality. Normally, we just assume side payments are feasible. In fact, you get so habituated to making the assumption that it becomes invisible to you. So, you start to think (for example) that "free trade is Pareto Optimal" is a good argument for free trade. And that's untrue. The necessary side-payments are probably not feasible and are not actually made in practice.

This graph shows that the private sector will always be better of as $Q$ increases (but with a decreasing rate). Thus the question is up to which point the increase of $Q$ will not negatively affect the society.

Not the answer you're looking for? Browse other questions tagged microeconomics pareto-efficiency welfare-economics externalities or ask your own question.

3
Pareto optimality and Externalities
4
Corner Solutions for Pareto Efficiency
2
Finding Pareto Optimality
3
If Y=K+C, why the value of a marginal unit of capital is the same of the value of a marginal unit of output?
1
SPNE and Pareto Optimality
3
Is there any academic source that uses the following 'standard broad' definitions of externality?
0
Finding Pareto efficiency with negative externalities
2
How does this imply that a Pareto optimum maximizes a weighted average of utility functions?