Did a similar property boom take place in another country or throughout history like we have seen in London? If so how did it effect the economy?

The London property market has seen a sharp increase in the average house price. If we go back to the 70's the average UK and average London price were almost the same, however since than the gap has increased quite dramatically. The average property in London is +£400k, whereas in the UK this is almost half.

How long prices will increase till the bubble will burst? Some say property prices tend to double every 8 years, if that's the case then in few years time the average price will be £800k, however this is not a fair balance compared to the average salary in London. My question whether the world has seen a similar property boom like in London (throughout history) where there is an imbalance of property prices & income, prices shooting up to such an extend that they become unattractive/ unaffordable? If so it would be nice if you could provide some reference as I am interested to study this into more detail and understand what the effects were of such highly priced market and how the economy responded?

According to Schroders the house price-to-earnings ratio in England was consistently above 8 until the late 19th century (see graph below). In 1845 it was 13 in England, so it was arguably higher than that in London at the time.

What I don't find very clear is if Schroders are referring to housing units when they speak of houses. They say that "houses" where bigger in the 19th century and hence more expensive. Obviously the average earner did not live in a bigger house but would have shared it with other average earners.

A more sensible statistic would hence be something like a "minimum housing unit price-to-earnings ratio". Comparable prices would still likely be higher in the past. But it shows that creating comparable data would require in-depth study not just of the economics of housing but also how these houses are used, i.e. what can realistically be considered a minimum housing unit in the 19th century given the housing conditions at the time (Engels published The Housing Question in 1872). 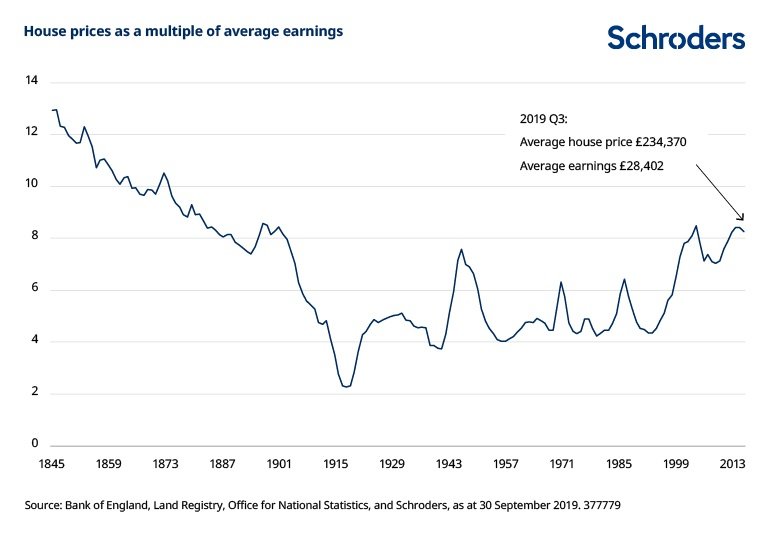 Not the answer you're looking for? Browse other questions tagged reference-request inflation housing property economic-bubble or ask your own question.

14
Larry Summers on the causes of secular stagnation
5
How can valuable retail real-estate stay vacant for an extended period of time?
29
A law against selling any house cheaper than it was bought for, what consequences would that have?
4
Why doesn't the government create money, spend it for free without interest, and recollect it with taxes?