The diagram from the Varian textbook shows that the SRAC curve is tangent to the LRAC curve at a point which is not the bottom of the SRAC curve. It would be really helpful if someone could explain this. 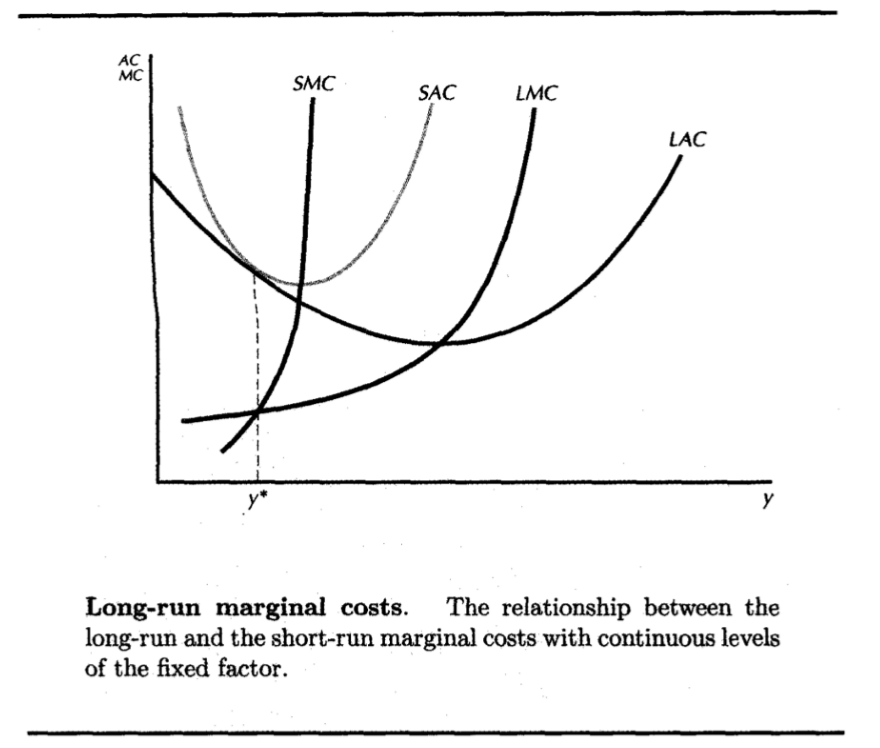 Long run in the context of a firm's cost functions means that all inputs are free to vary, so it makes sense to refer to the long run cost curve. Short run means that one or more inputs (eg capital equipment) are fixed. Since these inputs could be fixed at different levels, there are many different short run cost curves. The long run cost curve is the envelope of these curves. Unless it has been specified at what level they are considered fixed (which could implicitly be whatever is their current level), it makes no sense to refer to the short run average cost curve.

A diagram showing multiple short run average cost curves, with one having its lowest point tangent to the lowest point of the long run cost curve may be found in Nicholson W (9th edn 2005) Microeconomic Theory. For an online source see here.

Not the answer you're looking for? Browse other questions tagged microeconomics cost or ask your own question.

0
Why is the social value curve NOT the supply curve shifted downwards?
0
Are all points on the Long Run Average Cost (LRAC) curve productively efficient?
1
Monopoly/Monopolistic Competition Productively Efficient or Inefficient?
0
Why is Engel curve a straight ray through the origin if $D_wx$ = x(p, 1)$?
1
Is it possible that the minimum point of a short run cost curve does not touch the long run cost curve?
0
Why does average variable cost = marginal cost for this function?
1
Will a shift in the average total cost curve mean that the marginal cost curve will also shift up?
1
Geometric intuition behind the point where the indifference curve meets the budget line