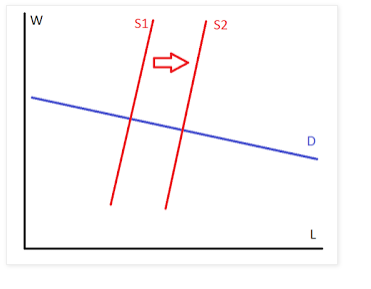 Can someone please explain these things? They show up all over the place and it seems people can't be bothered with documenting the labels. Is this showing f(L) = W? Is it showing f(W) = L? If so, what's up with the labels (D) and (S) on the curve? Is something else going on? What's the dependent variable? Are we trying to describe f(x,y) = S with a 2D graph?

Assuming that $W$ is wage and $L$ is labor, I would say this is a labor supply-demand graph. TD stand for demand and S for supply.

The graph shows a positive shift in labor supply, i.e. labor offered by workers, leading to an increase in $L$ and a decrease of $W$ due to the excess of supply.

The shift in labor supply can be caused by a variety of shocks as a preference shock which values more labor, a change in non-labor income, etc (look here for explanations)

I will write under the assumption that $W$ is the wage paid for each unit of labour, $L$.

The blue curve labelled $D$ is the demand curve which shows, for any wage, how much labour employers want to hire. That is, the blue curve shows $L=D(W)$. The reason that $L$ is taken as the dependent variable is that these kinds of figures are usually drawn for perfectly competitive markets. The defining feature of a perfectly competitive market is that the participants take the price (i.e. the wage) as given and choose the quantity to buy or sell accordingly.

The red curve labelled $S1$ is a supply curve that shows, for any wage, how many units of labour are workers willing to supply: $L=S(W)$.

If something happens to increase the supply of labour (e.g. mass immigration) then the supply curve shifts right (e.g. to S2) reflecting the fact that more $L$ is supplied at any wage. We then get a new equilibrium at the new intersection between $S$ and $D$. The prediction of the model is that this new equilibrium has a lower wage, and a higher quantity of labour employed.

The way Alfred Marshall (who pioneered this analysis) thought about it is this: each morning some sellers show up at the market with a quantity of goods to sell, while customers show up wanting to buy. If, today, few sellers show up with few items for sale, and if there are many buyers, then the sellers will collectively see an opportunity to set a high price. If, on the other hand, there are many sellers and few buyers then the sellers will compete with each other and the price will be low.

In this story, it is quantity that determines price, and this is why, much to the consternation of new economists, price is on the vertical axis.

But this is just a story, and the convention an accident of history. One can equally tell a consistent story in which sellers see the day's price and then decide whether it is worth going to the market or not (i.e., a story in which quantity is the dependent variable).

Neither of these two perspectives is more right than the other, and, at the the level of the market as a whole, one cannot definitively say in general that price or quantity is the dependent variable.

This is a classic supply and demand chart.

Quantity is function of Price, but economists like representing price vertically. (Veblen described curves where the same quantity could trade at more than one price.)

The D curve is demand. As price goes up, there is less demand (disregarding Veblen). That is, as the price rises, there are still buys who will buy at that price, but some will not, so there is a lower quantity that can be traded.

The S1 and S2 curves are supply. As the price goes down, some suppliers will not what to supply the commodity. This is a little bit of a question in the labor market. Do fewer people want a job if wages are low?

The price and quantity that is actually traded tends to be the equilibrium at the intersection of supply and demand. If the price is higher or lower, it will tend toward the equilibrium. I won't explain here, but we will see an example with the shift from the S1 to S2 curves.

The arrow showing a shift from the S1 to the S2 curve represents a change in supply. There is now a greater quantity of supply at the same price, or the same quantity at a much lower price.

There are some buyers who would not buy at the old price, but will buy if the price were lower. The extra suppliers are willing to take the lower price.

So the price decreases as a greater amount is supplied. This continues until the price lowers so much that there are no additional suppliers, which happens at the intersection of D and S2.

3
Basic microeconomics: supply, demand and substitutes in production
4
Question About Basic Supply/Demand Concepts
9
Why does quantity supplied increase with price in economics?
2
Supply/Demand Curve for Excise tax that's being passed 100% on to consumers
0
Understanding the law of supply
0
A basic question about supply and demand graph
0
Individual Firm and Market Demand Curve
5
Understanding Vernon Smith's 1962 "An Experimental Study of Competitive Market Behavior"
2
Why are the gas prices so high in the US and why does it depend on OPEC+?
6
Does the Sonnenschein-Mantel-Debreu theorem fundamentally undermine Mises' Economic Calculation Argument?