Does lowering corporate tax rates increase investment or provide some other benefit to a nation? [duplicate]

In Australia at the moment there is a move to lower the top corporate tax rate from 30% to 25% or thereabouts. The reasoning is that the benefits from investment will outweigh the cost to the budget.

There are claims either way e.g.

Malcolm Turnbull has recommitted to his government’s $48.7 billion tax cut for business over the coming decade, amid growing anxiety in corporate Australia over whether he might scale back the plan.

The Prime Minister told a business audience in Sydney the enterprise tax plan remained “so important” because of the fall in global growth, emphasising the need for ways to boost investment. 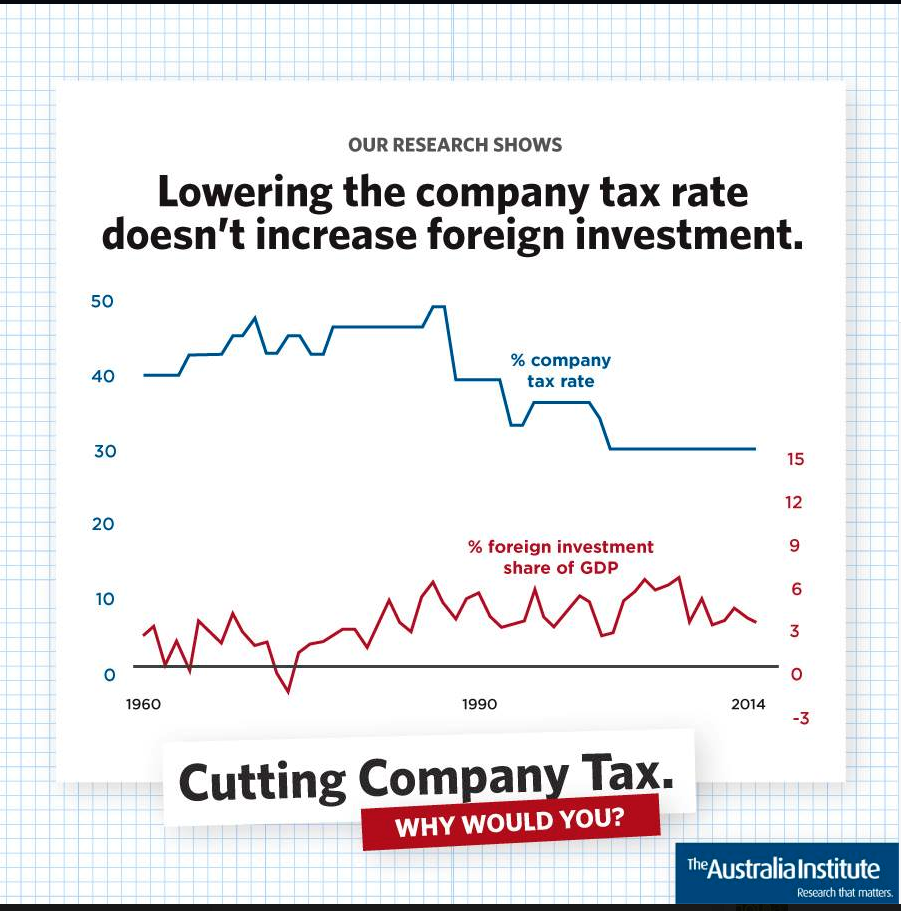 So which way is it? Does the benefit of the tax reduction outweigh the cost of the revenue loss or is it the other way around? Does it depend on other factors? Are there other benefits that may not exactly be investment, like moving offices?

Cutting corporate taxes is one of the tools of the Trickle-Down Economics (TDE) school of managing economic growth. In a New York Times article in 2012, economist Robert Frank of the Johnson School of Management at Cornell University summarized the findings of years of research about the effectiveness of applications of this theory.

In his article, he discussed taxes on individuals, rather than on corporations, and there are substantial differences, but I believe the mechanics of the behaviors of these two economic subsystems are the same with respect to drag effects, such as taxation. They are linked in that tax reduction on individuals was expected to spur increased demand for consumer goods and services, which in turn was expected to promote industrial expansion to meet the growth in demand.

In short, he states (and cites research to support the view) that this theory has never been demonstrated to work. In fact, it may be counterproductive in the case of individuals, who tended to save the additional wealth acquired through reduced taxation in tax havens, which have negative effects on growth.

Corporations tend to view taxes in one of two ways, depending on their economic context, their corporate strategy, and their resources. When they are short of investment funding, reductions in taxation can lead to an increase in their investment if their strategy dictates that, and their economic context allows it. If they are not short of investment funding, reducing their taxes will normally have little effect on capacity; their capital investment strategy is already adequately funded.

However, most middle-to-large size companies view their treasury function's capacity to raise capital through floating stock or taking on debt as the primary source of funding for investments. They may consider a tax rate reduction as a windfall in the short term, and use it to buy back stock or lower debt. In the longer term, they may issue or increase the size of dividends, or acquire another company, rather than increasing net capacity. In this case, the shareholders receive that portion of the tax cut, and the mainline TDE effects on individuals come into play. As John Kenneth Galbraith and others have demonstrated, these capital gains for individuals do not lead to increased individual spending. As a result, there is little to no effect on capital investment, since there is no substantial increase in demand to meet.

As long as their economic context warrants it, smaller businesses that do not normally use a treasury function take on debt or issue stock may choose to use a tax reduction to fund expansion, reduce debt, distribute the increase in net income as profits to their owners, or retain it as capital. So, even in this case, an increase in capital investment is only one of the possible outcomes.

For a company's economic context to warrant expansion, the company must: a) anticipate an increase in demand, or be already faced with unsatisfied demand, or both; b) have the means to manage expansion, or be able to acquire them; c) be able to compete effectively against current competitors and potential market entrants; d) be sufficiently free from higher-priority obligations to other parties that could consume the additional net income or capital raised, such as corporate debt payments, obligations to improve / repair operations for regulatory reasons, liabilities from litigation and product warranty repairs, etc.; e) have at least one viable channel of investment in capacity to deliver products or services, either through introducing new ones or expanding the delivery of existing ones

It should be noted that this is not just a theoretical discussion; the consequences of using this theory are staggering. David Stockman, Director of the Office of Management and Budget under President Reagan from 1981 to 1985, was a staunch advocate of TDE theory. The theory was repackaged and rebranded as "Supply-Side Economics" to avoid the stigma associated with the name of TDE. However, Stockman observed the national debt increase from 908 billion dollars in the last year of the Carter Administration to 2.1 trillion dollars (a 130% increase) by 1986. Clearly, the fiscal side effects on the government were unsustainable. He resigned in 1985, and became a vocal opponent of TDE. In December 1981, years before the negative effects became widely known, the Atlantic Monthly published an interview with Stockman himself, "The Education of David Stockman", which was highly critical of the strategy.

You can find other references to research criticizing the effectiveness of Trickle-Down Economics here.

Foreign Investment is not all about taxation. It depends a lot on qualitative factors, such as unionization, regulations, stability, work ethics etc. For example, there are high taxes in Scandinavian Countries, but a potential investor knows that he will acquire high skilled labor and the regulations will not change out of blue i.e. he is able to do a long run plan. Is he able to do the same in Yemen, even if it provides 0% taxation?

Also, there's another problem. Nowadays we talk about taxation without realizing the real purpose of it. In theory, we pay taxes in order to obtain public goods and services, such as national security, railroads etc. Was that 30% tax make sense with the services provided by Au?

Well, Australians back in 1980s happened to have comparative advantage against a bunch of other countries (English speakers, Anglo Saxon work ethics, it was far from USSR, therefore it was relatively stable, plentiful resources and raw materials).

The long story short, taxation is a necessary but not a sufficient variable in foreign investment.

6
How does lowering a corporate tax rate benefit a nation?