When and why women left the labour market?

It is well documented that women in now developed countries entered the labour market all thoughout the 20th century. As such, female labour participation have consistently increased. For example, this is a table from Godin (1977): 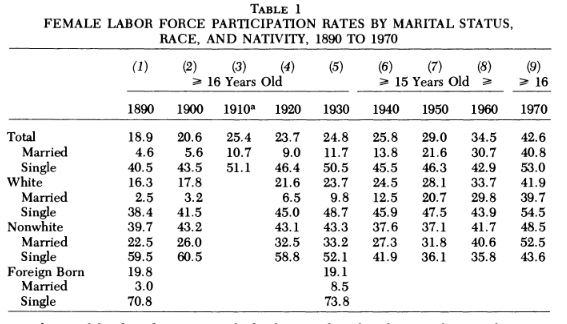 Here is a graph from a more recent report: 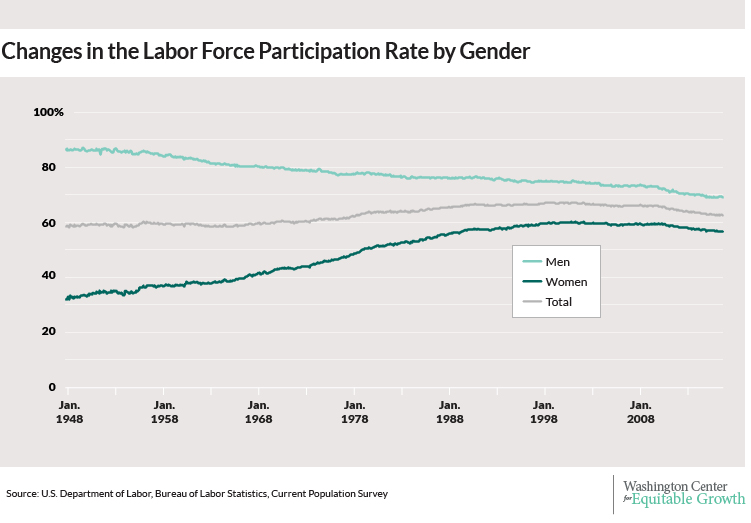 However, I have the impression that the feudal, or pre-capitalist societies, which were mainly agrarian and textile based, relied heavily on female labour. We can probably all picture housewives working in the field or sawing textiles.

So, the question is, when and why women left the labour market? Is this because of a transition from feudalism toward a capitalistic mode of production? Or the shift from agriculture to industry?

They worked at home. Like "Household Engineers" do today, doing everything working from down to dusk like their husbands, and like their husband they shared in the earnings of the household. Until the industrial revolution came each household operated like a mini business.

It was the Industrial revolution that divided "work"(e.g. business) from home.

Ironically with people working from home more and more we are returning to such a system.

Your impressions are inaccurate. Woman did not participate actively in the formal labor market in the feudal era. Men could provide enough for their families. The participation of women in the labor market came with the feminist revolution which was active in the U.S. between 1848 and 1980.

What you see in the movies is many times just not how it really was. It was unthinkable to let a woman work like a man before the feminist revolution, they couldn't vote either. Some say the feminist revolution was part of a broader set of actions taken to get woman out of the house and into the labor market in order to have a more abundant and cheaper labor supply for the economy. Also to collect more taxes and have children be educated by the state. Other actions would have been inflationary pressure.

My answer would be that woman are not leaving the labor market, instead they are entering it, more each year, and is also what you can interpret in those graphs.

The Industrial Revolution was an important watershed in women’s work in that it shifted the location of work out of the home. Because of the importance of machines powered by water wheels or steam engines, textiles began to be produced in factories rather than in workers’ homes. This change in the location of work made it more difficult for women to combine income-earning activities with childminding and other domestic duties. During the nineteenth century, higher household income, increased concern for cleanliness following the discovery of germs, and changes in social expectations combined to reduce women’s participation in work outside the home. At the beginning of the twentieth century, married women’s labor force participation reached a low point of about 10 per cent in Britain and 5 per cent in the U.S. (Hatton and Bailey 2001; Goldin 1990: 17).

In the U.S. and Europe, female labor force participation reached a low point at the beginning of the twentieth century, and then rose throughout the century. At the beginning of the century, social expectations made middle-class women hesitant to work outside the home. A married woman working outside the home was seen as a sign that her husband could not support her. During the twentieth century, economic incentives encouraged women to work more, and as more women did so the social stigma associated with work outside the home declined. Declining fertility reduced the value of time spent at home, and rising female wages increased the cost of staying home. Rising education levels contributed to women’s increasing wages, and education was itself encouraged by expectations of greater labor force participation. After controlling for women’s education and fertility and the economic opportunities they faced, the Second World War had little long-term effect on female labor force participation (Goldin 1990: 152–3).

Not the answer you're looking for? Browse other questions tagged labor-economics development-economics history or ask your own question.