What model did the MONIAC use?

Phillips designed a hydraulic computer to model the UK economy in 1949; 12-14 copies were built. What model did it compute with? How have modern models of the UK built on that work?

According to Bissell (2007), MONIAC was based on a simple, first-order model of the dynamics of an economy (but authors also mention it could be recalibrated to higher-order models):

Let $u$ be the production flow, $v$ the consumption flow, $w$ the stocks and $p$ the price, all measured, for simplicity, from a base at which the system is in equilibrium. We have then, by definition, the identity

This simple model could be further developed, in particular by making a distinction between working and liquid stocks, introducing lags into the production and consumption functions, and linking the demand curve for liquid stocks to the rate of change of price […].

The above is in its essence based on the idea of circular flow combined with some canonical Keynesian macroeconomics.

For example, just compare the diagram representation of MONIAC (picture on left from Media Archealogy wiki) to the circular flow diagram from contemporary Krugman's macro textbook (picture on the right). You will notice that there is some resemblance although they are not exactly the same.

This being said both MONIAC and circular flow diagram are didactic tools (MONIAC was used by central banks for some time, but the machine was originally intended just for classroom use). Hence the actual models do not directly build on this ideas even though they are connected.

Modern models that try to model economy such as dynamic stochastic general equilibrium (DSGE) models, relate to the MONIAC model only very superficially and don't build upon MONIAC model directly. 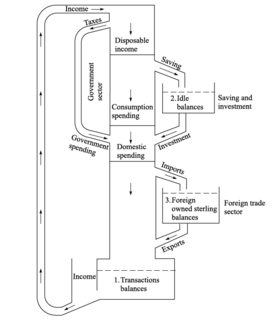 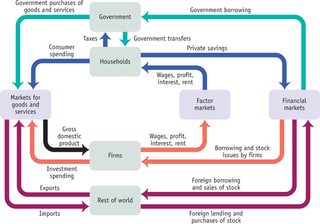 Not the answer you're looking for? Browse other questions tagged macroeconomics mathematical-economics or ask your own question.

2
When estimating a basic macroeconomics model, why is goodness of fit with labor data not often dealt with?
5
What are good books on economic world history?
1
How is GDP counted between different countries?
13
What is the point of all the models in an economics degree?
1
Which econometric test applied here?