Which are the different Schools of Economic Thought?

It would be great to have a brief but comprehensive list of current (e.g. Austrian) and defunct (e.g Mercantilism) schools of thought in Economics. I think an ideal answer would include:

Note: To order the discussion and avoid very lengthy answers, I suggest we have one school of thought per answer (like they do in other forums, like TeX).

Post-Keynesianism (PK) is based on the criticism of the so called "Keynesianism", which according to PKs is not loyal to core Keynes ideas. As such, this school of thought aims to be called the "true" Keynesians.

The criticism starts with the workhorse model of Keynesianism, the IS-LM model, developed by Hick in a 1937's article, right after Keynes magnum opus. According to Minsky (a prominent PK), this is

Later in life Hicks acknowledge this, by stating that his model

Given this background, PK has the following core features in its method:

A recent introduction to PK can be found in Godley and Lavoie (2007). There is also a very comprehensive two-volume Oxford Handbook of Post-Keynesian Economics.

Chang Ha-Joon distinguishes between 9 schools of thought. Here are his one-sentence summaries of each:

This approach to economics, widely inspired in Evolutionary Biology, is a direct criticism to Neoclassical Economics, as its key postulates indicate. These are:

According to Eric Beinhocker, complexity economics is built upon very old contributions, including Mathus, Darwin, Marshall, Schumpeter, and Hayek, to name a few. It is inspired by Biology (and Evolutionary Biology in particular), but also by physics. There is a discipline related to the latter and many times associated with Complexity ideas, called Econophysics. In terms of Institutions, the main precursor of this school of thought, and still central today in its development, is the Santa Fe Institute, in the U.S.

The Chicago School is a sub-school of the broader neoclassical school of economic thought, named for the significant influence of prominent scholars in Chicago. According to Wikipedia "The term was coined in the 1950s to refer to economists teaching in the Economics Department at the University of Chicago, and closely related academic areas at the University such as the Booth School of Business and the Law School. They met together in frequent intense discussions that helped set a group outlook on economic issues, based on price theory."

Key principles of this school include:

The Chicago School describes an approach to economics and is not confined to any particular field (indeed, the term also covers practitioners from closely related disciplines such as law who adhere to the same kind of principles). Prominent examples of work falling within this school are

Note that while these works cover disparate branches of economics, they share in the application of the principle that individual rational behavior and systematic analysis of markets are important in understanding social phenomena.

Chicago School Economists' contributions have often been most valuable for the subsequent debate that they prompt. For example, Director, Bork, and others cogently argued that vertical relations between firms are not generally anti-competitive—contrary to the prevailing wisdom of the day. This prompted a re-think of decades of antitrust practice, and gave rise to an entire literature studying the limits of this line of reasoning and providing a much more nuanced understanding of sound antitrust practice.

It is not-controversial to say that Neoclassical Economics is the dominant strand of economics within mainstream economics, not only in academia but also in teaching. Regarding this school of thought, this article states:

It describes the synthesis of the subjective and objective theory of value in a diagram of supply and demand, which was developed by Alfred Marshall. Marshall combined the classical understanding that the value of a commodity results from the costs of production with the new findings of marginalism, stating that the value is determined by individual utility. Until today, the market diagram representing the intersection of (objective) supply and (subjective) demand is a central element of neoclassical economics.

The core elements of this school of thought are:

Albeit many economists contributed to the emergence of this school of thought (particularly the "marginalists" William Stanley Jevons, Leon Walras, and Carl Menger), the father of neoclassical economics is Alfred Marshall. In his famous and widely used book "Principles of Economics", published in 1890, he provided a systematic and rigorous treatment to now-common topics like "elasticity, consumer surplus, increasing and diminishing returns, short and long terms, and marginal utility". He was also the first to use the demand and supply graph: 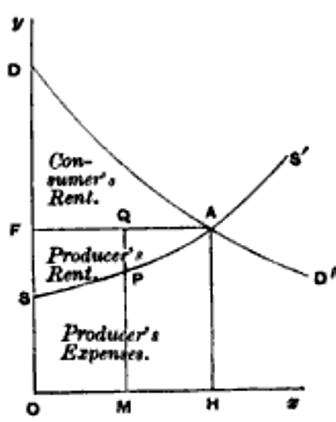 Unlike Neoclassical Economics, which focus is usually on scarcity, Feminist economics focuses on the issue of Power relations, particularly in relation to gender and family structure. For example, whilst a neoclassical economist would study the gender gap in terms of benefits and costs (e.g. cost of post-natal leave), a Feminist economist would focus on how institutions (ranging from firm culture to family structures) are designed to the benefit of men's development and detriment of women's development.

Core elements of Feminist economics are:

Methodologically, there is no a clear, distinct perspective. Both quantitative and qualitative methods are used (according to Nelson (1995), this is consistent with a feminist stance against the stereotype where mathematical models are "masculine" and better regarded than the "femenine" qualitative methods, which are weaker).

Politically, the spectrum of feminist economics is quite broad, ranging from liberal feminists (focused mainly on equal access to labour market and institutions) to Marxists feminists (arguing that gender differences are intrinsic to capitalism).

Needless is to say that there are both female and male feminist economists. See a comprehensive list here.

Source: based on this article.

Not the answer you're looking for? Browse other questions tagged economic-methodology schools-of-thought philosophy-of-economics or ask your own question.

2
Which are some proven methods to compare alternative economic theories?
1
What is economics?

10
The Sonnenschein-Mantel-Debreu results, what are the implications for macroeconomics?
6
Economic schools of thought VS Econometrics
2
Which are some proven methods to compare alternative economic theories?
0
What are the best theoretical or empirical defenses of equilibrium analysis in economics?
1
How *should* weigh income/consumption at different income levels (esp. to the very poor vs poor) ... perhaps in a 'social welfare function'?
7
What are the primary differences between the Chicago and Austrian school of economics?