Hello I'm working through Microeconomic Theory : Basic Principles and Extensions of Nicholson and Snyder 10e, for an exam and I fail to get how to answer this question (p.517) :

Then I have tried some identities of $q^m$ and $p^m$ but I can't get to the proof.

Note the the left-hand side of the last line in both sections is the same. Moreover, this expression ($P'(q)q+P(q)-C'(q)$) is the derivative of profits assuming zero tax. If profits are concave then this derivative is decreasing in $q$.

We can see that, for any value of $q$, the right-hand side is smaller for the ad valorem tax (because it has an extra term that is negative--remember that $P'(q)<0$). Thus, we have something that looks like this: 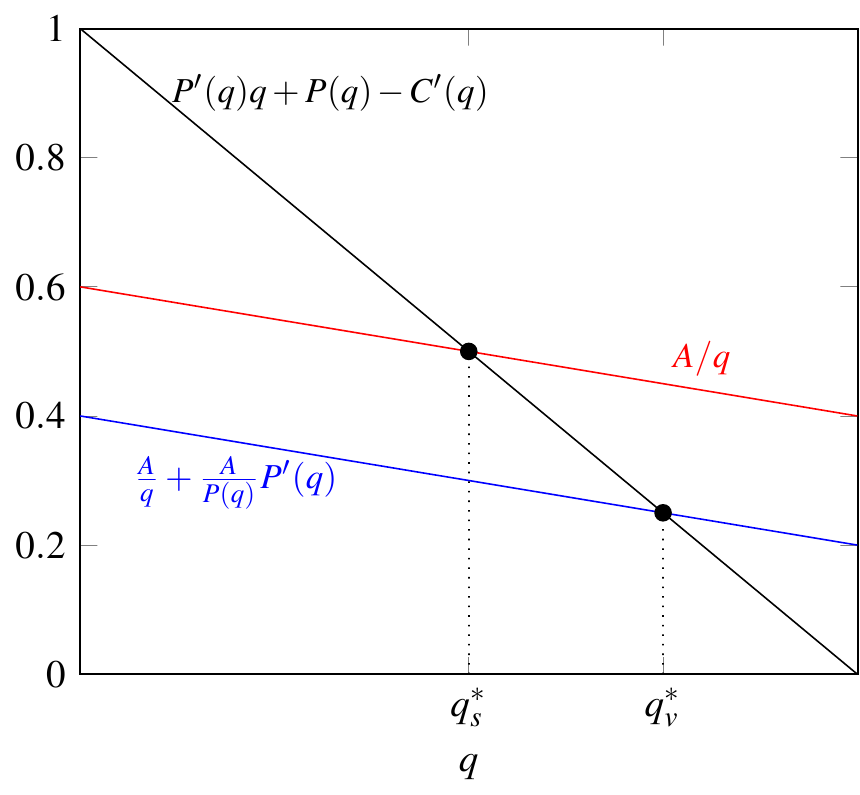 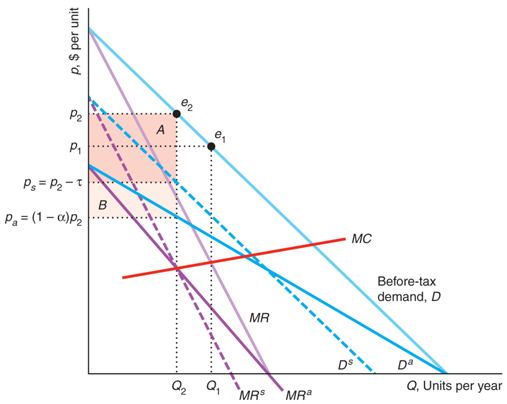 Graphical representation: in the pre-tax situation:- demand curve is D and marginal revenue curve is MR, optimum is $e_1$ , output is $Q_1$ and price is $P_1$.

Case 1: Specific tax (τ):- After tax demand curve is represented by the dotted demand curve $D^s$ and the corresponding marginal revenue curve $MR^s$. Intersection with MC gives the optimum $e_2$ where price is $P_2$ and quantity is $Q_2$. Revenue is area A=τ$Q_2$.

Case 2: Ad valorem tax (α) :- After tax demand curve is represented by the demand curve $D^a$ and the corresponding marginal revenue curve $MR^a$. Let α be so chosen that the corresponding marginal revenue curve intersects the cost curve at $Q_2$. Observe that although it reduces output by same amount, in this case, it raises higher revenue, i.e, area A+B=α$P_2$$Q_2$.

Clearly, from here we can conclude that had we imposed an ad valorem tax that collects the same revenue as the specific tax, reduction in output would be less.

Not the answer you're looking for? Browse other questions tagged microeconomics taxation monopoly theory or ask your own question.

4
Taxes levied on sellers = Taxes levied on buyers
3
Monopoly with price discrimination
3
Pushing taxes - economic etymology
0
Exercise about Monopoly price charging
2
How effective is progressive tax at regulating monopoly?
0
Taxing a monopoly
1
What is the difference between monopoly profit and monopoly rent?