When action and strategy differ in game theory

It looks like in a static, simultaneous move game, action is used interchangeably with strategy.

But when do they differ, say in a more complicated game structure? I am trying to understand the difference between the two and try to keep in mind that I should, in general, NOT equate these two.

Even when I think about the normal form game, prisoners' dilemma, it is not all clear why in this case, action is equivalent to strategy and many authors choose to use two terms interchangeably.

When criminal is called upon to act, she can either cooperate or defect. But the strategy set is

And when do these two notions depart from each other?

If you happen to know that the "normal form" is sometimes also referred to as the strategic form, you'd most likely not be surprised that it doesn't help you distinguish between the notions of action and strategy. The normal form is precisely used to represent strategies (not actions) in a game. To appreciate the difference between strategies and actions, it's probably best to consider another form of game representation: the extensive form.

Suppose 2 players move sequentially, and that Player 2 observes Player 1's choice before making his decision. The scenario can be represented using a game tree as follows: 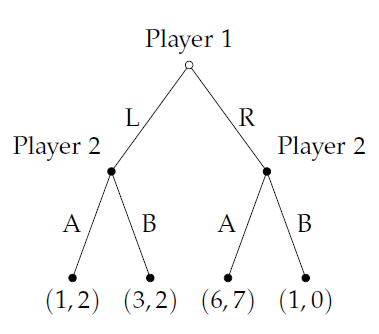 Here we can call $\{A,B\}$ Player 2's actions (actually the correct jargon here is behavior strategies, but I sense that this level of nuance is unnecessary at this point). However, they are not his strategies, for strategies in this case is a "full contingent plan" that specifies an action at each information set the player moves. Since Player 2 moves at two information sets (one after $L$ and the other after $R$), so one of his strategies would be

To represent this game using the normal/strategic form, we'd have

It's not a 2-by-2 game, but 2-by-4, precisely because strategies and actions are not the same.

Lastly, a note on Prisoners' Dilemma (PD) and other similar one-shot simultaneous-move games. If you consider the extensive form of PD, you'd see that each player moves at only one information set, and so their set of actions and set of strategies coincide (just like Player 1 in the above example). This is why you can use the two terms interchangeably in those games.

6
Is a Nash equilibrium anything more than what it is?
3
Confusion on Strategy Sets in a simultaneous move game
3
Game theory - Definition problem - Strategy vs Action
2
Why does competition work for capitalism?
1
Timing of Nature Drawing Types
2
What is the economic incentive to cheat? How does an experiment capture exogenous deviations?
4
Social Welfare and Pareto Optimality in a Bayesian Game
0
Penance strategy game theory