Economic schools of thought VS Econometrics

Why is it that different economic schools of thought are still taught in spite of the fact that we now have data to test their ideas and philosophies of the economy and see if they really line up with reality?

Actually, many people claim that too few schools of thought are taught.

The question is very broad because it encompasses several topics in the methodology of the social sciences and in epistemology. First, we do not know whether we can actually test theories through econometric analysis. Econometric techniques - and in general statistical ones - are based on sets of assumptions which are not necessarily true. In fact, different econometric models and strategies can be applied to the same problem and we do not always know which one is the best. This is the problem of model selection Dave Harris talks about in his answer. Note that model selection problems can arise even within the same theoretical approach, not only between different ones.

Moreover, people are not even sure that we can use empirical data to test theories. These people propose very different arguments, spanning from Hume's skepticism to the Austrians' point that theory always precedes perception, hence distorting any empirical test (this is one of the most important point in the Methodenstreit, that is the debate between the Austrian School and the German Historical School - the first one to make use of statistical data to "test" economic theories). Nonetheless, they basically agree that we only understand the world through more or less structured theories, and we select data and evaluate them in non-random fashion, making useful but aprioristic assumptions.

Second, econometrics has flourished during the heyday of Neoclassical Economics, hence it is partly built on this School's assumptions. It is hardly arguable that a methodology built on a certain set of theories can be objectively used to gauge alternative theories.

Third, different schools of thought are not just diverse groups of theories. They are different paradigms - that is different "ways" of looking at the world - and they rest on such different assumptions and explanations that is simply too hard to compare them. Paradigms are better evaluated by their internal consistency, and only after that we can make comparisons. Of course, there is a problem of validation and selection (how do we select a "better" paradigm? Why certain paradigms survive and expand and other collapse and fade?). But that is a problem of epistemology more than econometrics.

We would better teach as many paradigms as we think is useful and enhance our understanding of the economy through cross-contamination, always striving for a more convincing explanation, not for an impossible definitive answer.

I think I can explain the problem as to why the schools persist. For simplicity we will limit ourselves to the Marxist, Austrian, Neoclassical and Neo Keynsian schools. I am not sure where to put the Feminist school except under the broad heading of heterodox with Marxists and Austrians as I don't think of it as a school so much as an attitude or direction of thinking. The same thing would be true for Green economics, it isn't so much a school as a domain. There are many small groups out there.

Austrian economics as thought through by von Mises argues that there can be no way to measure what they are saying and so they are part of the humanities. The neoclassical and the neo Keynesian school say any claim that is stated should be measurable and falsifiable, so it is in the sciences.

That said, any serious review of von Mises and related writers would tend to drive one down the path well laid by Leonard Jimmie Savage and his personalistic statistics and in doing so would have a complete empirical methodology. I believe the branch of the Austrian school that says things cannot be measured simply hasn't read enough statistics.

The two primary schools, the modern Keynesian and Classical forms, are empirical and the reason you cannot rule one out is that both are empirically supported even though they are contradictory. This is similar to the problem between quantum physics and relativistic physics. They make contradictory assertions. It is impossible that both are true, except where they don't overlap. Yet they both work everywhere else.

The best tool for model selection in that it is both disciplined and founded on well understood mathematical principles is Bayesian model selection. Non-Bayesian methods assume that you know the null model and you assert the model is true. This works great for binary problems but is terrible for non-binary problems.

If we define a model space as indexed on the set $I$, with $i\in{I}$ and a set of models, $M$, so that $\mathcal{M_i}\in{M}$ and with vectors of parameters $\theta_i\in\Theta_i$ in a parameter space $(\theta_i,\mathcal{M}_i)\in\Theta\times{M}$ then we can solve the problem of the best model. Best in this case being understood as being most probably close to the data generating function.

While this methodology works generally and works especially well on a problem by problem basis it won't answer which school is best since it will provide contradictory solutions across specific problems.

What is really needed is a better, overarching explanation of what triggers Keynesian-like effects and what triggers Classical-like effects. My suspicion is that it is stochastic shocks in the planetary budget constraint compared to where that constraint is expected to be at by the individual actors.

There are a large number of factors that affect the economy, and these factors are all changing at the same time. The issue is correlation does not mean causation. The economy cannot be experimented on where all other factors are held constant, in order to determine what causes what.

There is really on two kinds...

The Nature of Economics

It is well-known that Austrians disagree strongly with other schools of economic thought, such as the Keynesians, the Monetarists, the Public Choicers, Historicists, Institutionalists, and Marxists… The ultimate difference from which all disagreements at the levels of economic theory and economic policy stem… concerns the answer to the very first question that any economist must raise: What is the subject matter of economics, and what kind of propositions are economic theorems?

Mises’s answer is that economics is the science of human action… It is this assessment of economics as an a priori science, a science whose propositions can be given a rigorous logical justification, which distinguishes Austrians, or more precisely Misesians, from all other current economic schools. All the others conceive of economics as an empirical science, as a science like physics, which develops hypotheses that require continual empirical testing.

The views of Mises’s predecessors, Menger, Böhm-Bawerk, and Wieser, are the same: They, too, describe economics as a discipline whose propositions can in contrast to those of the natural sciences be given some ultimate justification.

But Mises by no means merely notices this rather obvious difference between economics and the empirical sciences. He makes us understand the nature of this difference and explains how and why a unique discipline like economics, which teaches something about reality without requiring observations, can possibly exist. It is this achievement of Mises’s which can hardly be overrated.

Now why is this school of thought (what used to be indistinguishable from the orthodox) no longer so mainstream?

Why Academics Hate A priori

University instruction in an a priori science presents special problems if we are to adhere to the principle that an instructor ought to be a researcher as well. In every field there are very few who can make actual contributions to its intellectual treasury. In the a posteriori sciences, however, pioneers and followers work together with the same told, and there exists no outward distinction between them. In his laboratory, every professor of chemistry can compare himself with the great pioneer. Although his contribution may be modest, his research methods are the same.

Things are different in philosophy, in economics, and in a certain sense, in mathematics. If academic positions were contingent upon independent contributions to economics, barely a dozen professors could be found throughout the world. If positions are awarded only to those researchers who had made original contributions, care must be taken to take into account research done in related areas. In effect, this makes the appointment to academic positions dependent upon scholarly activity in other areas: the history of ideas and doctrine, history of economics, and especially the economic history of the most recent past, which is often erroneously labeled economic problems of the present.

The fiction perpetrated in scholarly circles that all professors are equal does not permit professors of economics to be divided into two classes: those who work independently as theorists, and those whose work consists of economic history and description. The inferiority complex of these “empiricists” has led to a campaign against theory. — Ludwig von Mises, Memoirs

in spite of the fact that we now have data to test their ideas and philosophies of the economy and see if they really line up with reality?

Mises’s great insight was that economic reasoning has its foundation in just this understanding of action; and that the status of economics as a sort of applied logic derives from the status of the action-axiom as an a priori-true synthetic proposition.

The laws of exchange, the law of diminishing marginal utility, the Ricardian law of association, the law of price controls, and the quantity theory of money—all the examples of economic propositions which I have mentioned—can be logically derived from this axiom. And this is why it strikes one as ridiculous to think of such propositions as being of the same epistemological type as those of the natural sciences.

To think that they are, and accordingly to require testing for their validation, is like supposing that we had to engage in some fact-finding process without knowing the possible outcome in order to establish the fact that one is indeed an actor. In a word: It is absurd. 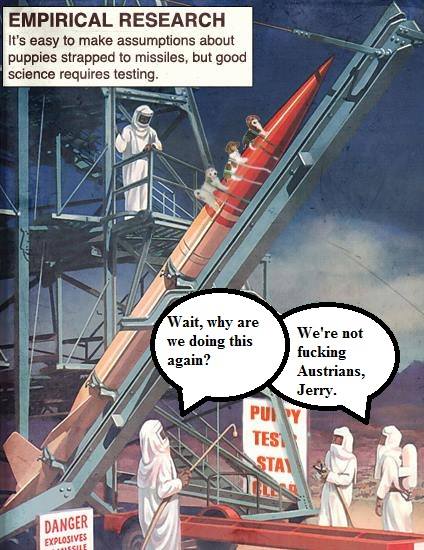 To use an analogy; it is as if one wanted to establish the theorem of Pythagoras by actually measuring sides and angles of triangles. Just as anyone would have to comment on such an endeavor, mustn’t we say that to think economic propositions would have to be empirically tested is a sign of outright intellectual confusion?

But Mises by no means merely notices this rather obvious difference between economics and the empirical sciences. He makes us understand the nature of this difference and explains how and why a unique discipline like economics, which teaches something about reality without requiring observations, can possibly exist. It is this achievement of Mises’s which can hardly be overrated.

Not the answer you're looking for? Browse other questions tagged econometrics history-economic-thought economic-methodology or ask your own question.