How to handle change in base year of index?

I intend to use the IIP monthly index from April 1996 - March 2016 but as you can see their exists two set of different index. Can you please help suggest some technique/method so that the entire index is on the same base year of 2004-2005?

For your reference I have attached the data.

Edit: see the data and the necessary calculation here.

You need to rebase the oldest series, using the base from the new series. This is an example of how to do this, with annual data (same for monthly data): 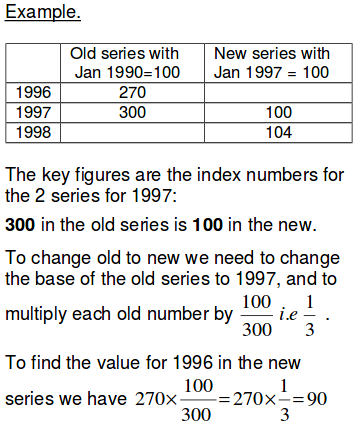 So, basically, you need to find a period in which both series have an entry, compute the ratio between them, and then transform the old series using the ratio just calculated. This is how you link two series in different base years.

Remarks: you will have several months in which the series have values. If you have reasons to believe that the newest series is better, then I would make sense to take the earliest month in which the two have data (probably January of 2005). Nonetheless, the two series might be in fact different (e.g. sector composition or definitions vary). Compare the rate of monthly growth of both indexes for the months in which both have data (probably January 2005 to Feb 2011). Are they very different? If so, you might try to adjust the old series. Perhaps, there is a persistent difference, which you can account for when expanding the newest series backwards. See more in this document.

Not the answer you're looking for? Browse other questions tagged base-year or ask your own question.

0
When the base year changes, does it affect data at current prices as well?