In my experience, CME S&P futures, for example, require a performance bond of something less than 10% of the market value of the underlying asset(s) to open a position, i.e. healthy leverage is baked into the product. As I calculated back then, TARP and TARPII literally provided enough capital to purchase the entire US stock market via futures contracts.

Today, a decade later, the run on global banking seems to continue. "Buy gold bcs you can't trust governments or banks" commercials come on TV about every 15 minutes. Also, inflation continues to outpace return on bank deposits, i.e. negative real interest rates. Punishment for holding cash; and we see several Nations outlawing large denominations of cash. Gold has been repatriated out of NYNY in masse.

Did the global banking system collapse in 2008, or was it simply a housing/mortgage issue? Lastly, if it did, my understanding is that like 99% of $100 notes are held outside of the USA. Why didn't the Fed simply declare bankruptcy, void all those notes (and all those complex derivative contracts), and start over with new money? Why the fake? The sun's going to come up tomorrow regardless...?

The low real interest rates you mention isn't a problem with the banking system, it's a simple problem with too many parties (globally) wanting to save and not enough wanting or being able to borrow. The latter effect is partly because of government and bank reluctance repeat the same mistakes with loose lending and partly because we don't have a lot of good real investments available to us.

Yes, you are off base. The banking system, and financial system in general, temporarily lost a lot of value and suffered from a credit crunch but have since recovered and are doing very well.

As I calculated back then, TARP and TARPII literally provided enough capital to purchase the entire US stock market via futures contracts.

Posting margin to take a large position in futures contracts is very different from "purchasing" the stock market. I don't understand how this is related to your question, though. Using bailout funds to speculate on the market seems like an odd idea. Note that TARP funds were loans, which have been repaid and made the government a tidy profit.

Did the global banking system collapse in 2008, or was it simply a housing/mortgage issue?

Again, it didn't collapse, but it did suffer. The housing situation was the precipitating event but there were a number of problems that came to fruition at the same time.

Lastly, if it did, my understanding is that like 99% of $100 bills notes are held outside of the USA. Why didn't the Fed simply declare bankruptcy, void all those notes (and all those complex derivative contracts), and start over with new money? Why the fake? The sun's going to come up tomorrow regardless...?

Why would the fed want to declare bankruptcy? If it tried to void our currency there would be negative global economic and political repercussions the likes of which we have never seen. I cannot imagine this happening nor why you would think it would be a good thing.

Is there a reason you think voiding derivative contracts would be a good thing? Those are contracts parties voluntarily engaged in, many of which are necessary to provide stability to both or at least one participant. During the crisis the fact that big banks were involved in so many derivatives undermined their credit-worthiness because people couldn't be certain how much risk they had. But that is a very, very far cry from saying that it would be a good idea to void derivatives, or even certain classes of derivatives.

The main factor was bad loans. Moreover, bad loans were made to look like high grade loans by lying and by gaming the system.

Housing loans were bundled. The big rating firms allowed a small percentage of bad loans even in the highest grade bundles. So bad housing loans were bundled with good loans. The bundle (highest grade) was then put into a new bundle with more bad loans and the new bundle would also get the highest grade. The process was then repeated a number of times until there was a large amount of bad loans in a bundle with the highest grade. The bundle was then sold at a premium, because some of the bad loans had really good interest rates. When it was discovered that these highest grade bundle actually contained a large portion of bad loans their value dropped. Some financial institutions were hit so hard that they went insolvent. The US government decided not to bail out of the fairly large players. The result was that all debt of that player became worthless, sending ripples through the banking sector that threatened to bankrupt more banks throughout the world. Without intervention from the governments, there would have been a banking collapse.

Meanwhile, some countries in Europe had been lying about their national debt and their budget deficits. When the financial meltdown happened the big banks started to look at other loans that could be lower grade than indicated, and their sights set on the cheating countries. Again, the governments (and the EU) had to intervene.

As for voiding national debt: FIAT currencies are only as good as the trust people put in it. If the US would default on its national debt (paper money is debt), what would happen to the trust in the new US dollar? Who would dare accept US dollars or lend money to the US in the future if there is a risk that the money will become worthless?

A factor that appears to be often overlooked is what was happening to the price of energy since 2004. The WTI oil price broke through $40 in 2004 and just kept rising. Combined with aggressive housing credit offering, the gradual squeeze on energy prices eventually tipped the system. 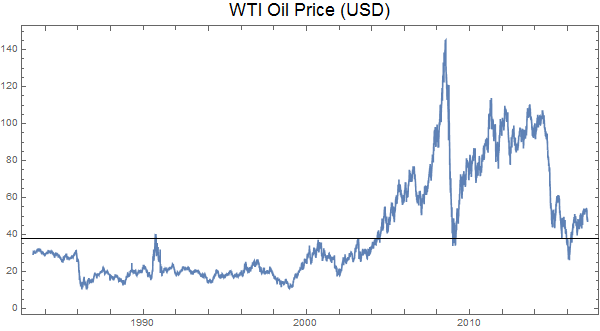 2
why did the 2008 financial crisis happen inspite of banks having 85% insurance on deposits in U.S.?

4
If banks started simply depositing money with each other, then what else?
1
What guarantees that for every credit there is a debit in an electronic fund transfer?
0
What is a dollar, currently?
1
What are the costs of requiring banks to have more equity?
2
why did the 2008 financial crisis happen inspite of banks having 85% insurance on deposits in U.S.?
0
What happens with corporate deposits when a bank goes bankrupt?
1
What happened when the money from share issuance is spent?
1
What incentives do private banks have not to lend money