Why labour, capital, and output levels cannot be pinned down in perfect competition?

Consider a firm producing with the following technology:

Assuming that factors are paid their marginal contribution to output, it can be shown that the optimal factor choice for this firm is:

(this comes from finding each factor's payment, and combining them)

This is not the case if there is just one input. For instance, if $Y=AL^\alpha$, then

The reason is not related to the degree of returns to scale, as this is not constrained. It is not related to elasticity of substitution either, as in the case of a CES, it is also the capital-labour ratio which is solved for. Here, the solution is

So, the question is, why can we not pin down the level of optimal inputs and output? Is this because we have treated factor prices as exogenous, so we are missing the supply side of each factor market?

I don't think this is true. You combined two equations into one, and thereby lost information. The optimization problem is

Note: I did not go into second order conditions but this is only a maximum if $\alpha + \beta < 1$.

Ok, after several analysis of @denesp's answer, and our subsequent chat discussion, I think I got the answer I was looking for.

As @denesp rightly pointed out, the optimisation problem yields two FOCs. These are:

We can rearrange each of them, to the form $L=f(K)$. These are, respectively:

Now, for a given parameterisation (with non-trivial $p>0$), we can plot this functions in the $\{K,L\}$ space. Additionally, we can the optimal capital-labour ratio, which comes from equalising the MRTS to the MRS. As I showed in the question, this optimal relationship is given by:

So, we can now plot the three aforementioned functions: 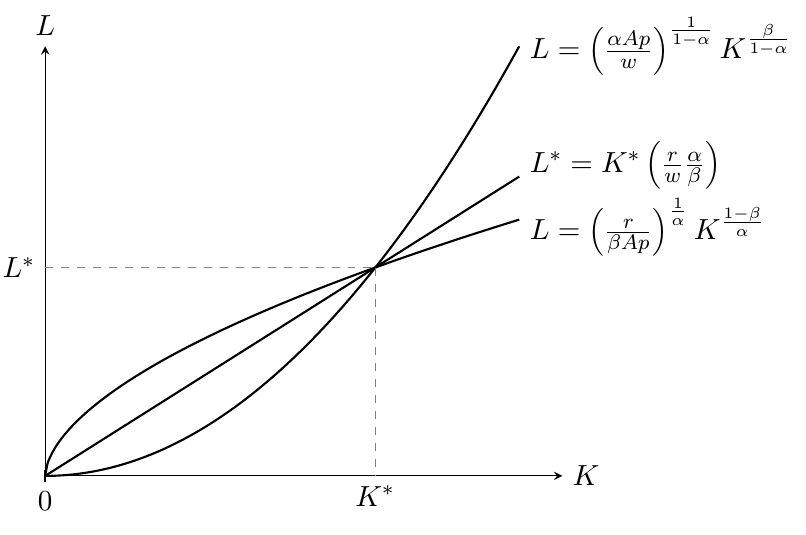 First, notice that there is a trivial equilibrium at $K^*=L^*=0$. Second, there is another equilibrium with positive optimal inputs and production. Naturally, this point crosses the optimal capital-labour ratio. Importantly, the level of capital and labour can be known. For example, capital is given by the formula shown in @denesp's answer.

Which equilibrium does the firm choose? As @denesp rightly noticed, the non-trivial equilibrium is preferred only if there are decreasing returns to scale ($\alpha+\beta<1$), as a positive production yield positive profits. This can be confirmed using the SOCs, or calculating optimal profits (see below). In the case of increasing returns to scale ($\alpha+\beta>1$), firms would rather not produce, as any positive level of production yield losses.

Yet, the most interesting case - and that which motivated my question - is that of constant returns to scale. It is easy to see in the graph above that under CRS, the two labour functions become linear. Do they have the same slope than the optimal capital/labour ratio? This depends on whether we are thinking from a partial or general equilibrium approach: 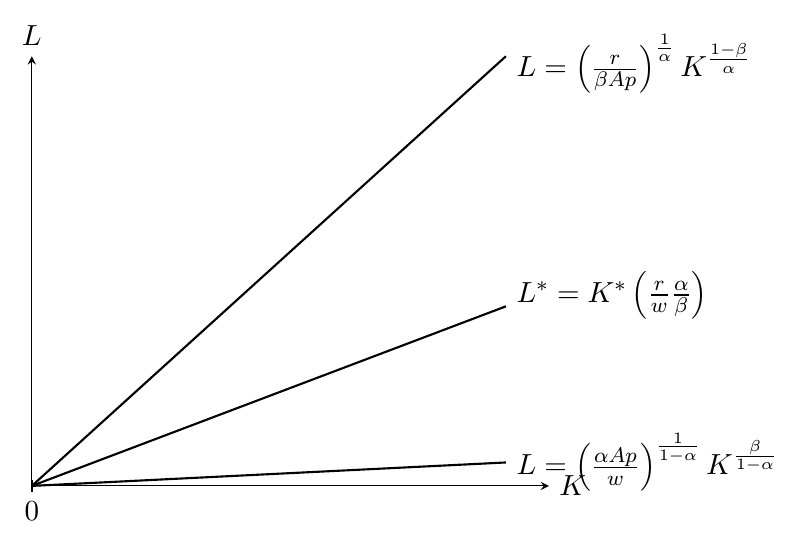 To find the equilibrium however, the graph is not entirely helpful, because the optimal choice depends on how $p$ compares with the equilibrium price $p^*$, mentioned below. If $p>p^*$, a firm will want to produce infinity, or as high as possible. Conversely, if $p<p^*$, firms will no produce at all as any positive production leads to losses.

Conversely, if the initial price is below the equilibrium, no one produces. Therefore, there is an incentive for firms (consumers) to charge (accept) higher prices. This is until the price becomes $p^*$. Here, there are zero profits. In indifference (as always), we choose the non trivial equilibrium of positive production.

It can be shown that the equilibrium price is given by:

But here is the key element of the answer. At this equilibrium price, the three linear functions shown in the above graph merge. Their slope is the same. They are indistinguishable. This means that, for the individual firm and in the general equilibrium, any level of capital and labour is optimal, as long as their ratio follows the optimal ratio defined earlier. In other words, under CRS, the level of inputs cannot be pinned down, because at any production level profits are zero. In consequence, how much to produce is irrelevant.

Notice that, by introducing the demand for this good, we could find out the aggregate demand for $Y$, which can help us to pin down the *aggregate** input level. Yet, the firm's input and output levels cannot be pinned down. In fact, firm size remains indeterminate. This is not even solved by introducing an arbitrary number of firms, unless assuming firms are identical.

A note on prices.

In the discussion with @denesp, the issue of the price level came up. For risk of misrepresenting @denesp's point, I will only show my conclusion on this. Namely, that in the general equilibrium, the sign of profits depend solely on the nature of returns to scale.

Consider the FOCs arising from the original problem. These are reproduced below:

Without loss of generality, these can be rewritten as:

The cost function is given by

Replacing the two factor equations in the cost function leads to

Since income of the firm is $pY$, profits are:

This is, the sign (and size) of profits depend on the degree of returns to scale. This is regardless of the price level (as long as it is positive, of course, as expected for a good).

To make the point clearer, the above equation for profits it's true in the general equilibrium. This is because by replacing $w$ and $r$ for the endogenous market values, I am assuming that the factor markets are always in equilibrium.

The optimal level of production is where the demand and supply curves intersect.

The cost of labor and capital make up the supply curve; the cost of production at different levels of output.

2
How to derive cubic cost function from a problem of constrained optimization?
4
Maximisation problem in a multiproduct firm
12
Solow Model: Steady State v Balanced Growth Path
4
Constant Returns in a Production Function $\frac{Y}{L}=\left(\frac{K}{L}\right)^{\alpha}\left(\frac{R}{L}\right)^{\beta}$ ($R$ = Resource)
4
Is optimal labour zero when (i) capital fixed and (ii) elasticity of substitution less than 1?
0
Solve for the steady state with CRS Cobb-Douglas, problem with the system of equations
2
CES production function with non constant returns to scale
4
Correct and complete characterisation of the Walrasian demand function
4
Quantity restriction in model with fixed factor of production