I have heard numerous times that the future has gotten better. Poverty rates are on decline. Yet, seeing a commercial that 1 in 6 American children are hungry got me thinking. These sources, and others, have shown poverty in America has gotten much worse over the years. Due to things like automation, outsourcing, increased taxes due to pay for welfare from the poverty, things will only get worse in terms of these rates.

You should not make predictions in economics. I understand now. But, why have we heard so many times things are getting better in these rates and they are not? More people are hungry. Places like America, Europe, they are poorer. Poor may live better, but still not good.

So, my specific question is whether the total fraction of the US population that is poor is getting larger and under what definition of poverty. Thanks.

A snapshot of Poverty for the US is here. The key is Figure 5, which shows alternative measures of poverty, using different data and methods. (see text for details). Basically, they show that there is plenty of variation from alternative criteria, ranging from 0% to 5%. This is likely to be an explanation of why sometimes evidence seem to be contradictory.

For the evolution of poverty, see this study. Unfortunately, it stops at 2010, but it is very comprehensive. Figures start in page 53. Basically, poverty has fallen recently, specially when measured in terms of consumption. This could be an indication that before the Great Recession, poorer individuals were living on loans/debt. There is plenty of evidence that consumption inequality is lower than income inequality, because individuals have a desire to "keep up with the Joneses" (the so-called Veblen Effect).

Here is the evolution of World Poverty since 1820: 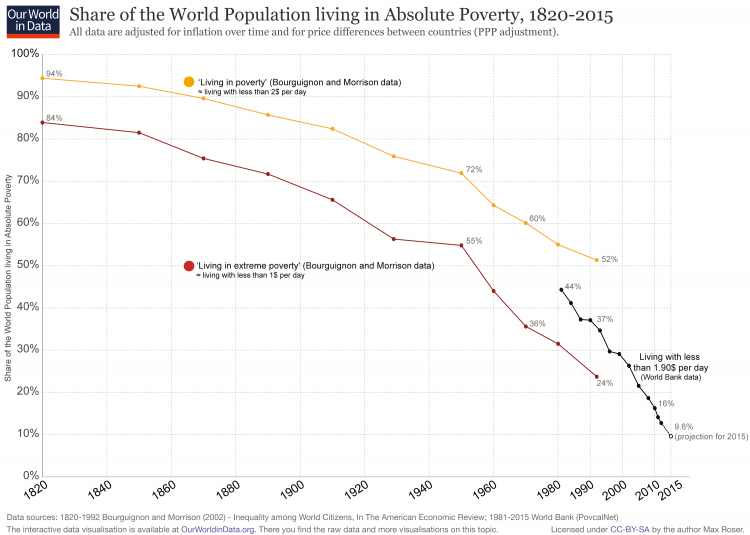 Here is in relative terms (as % of world population): 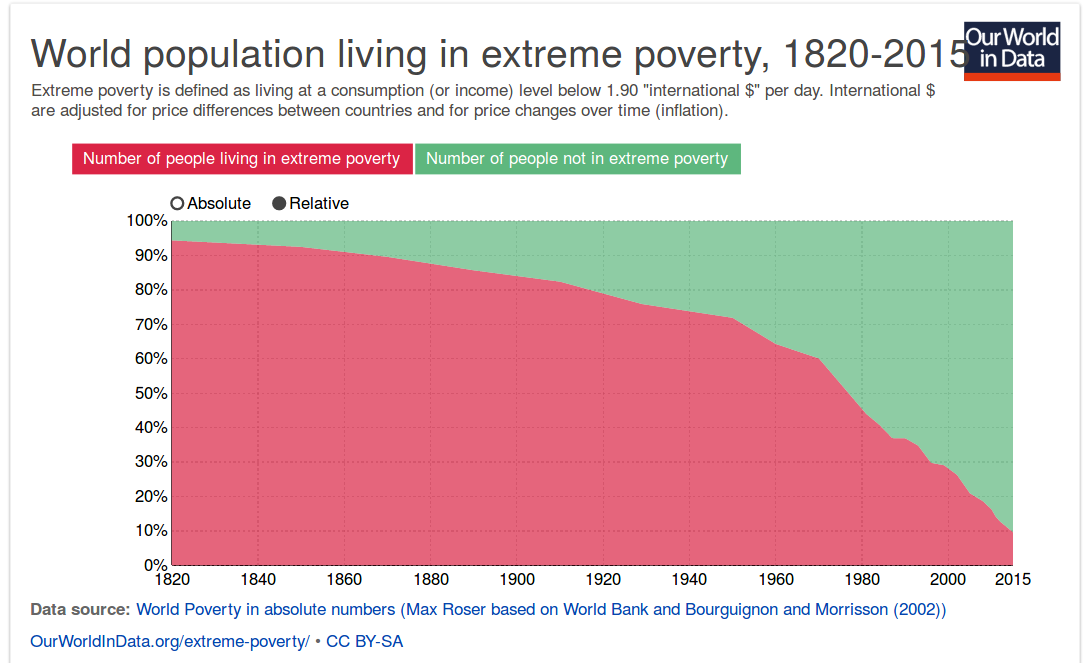 Here is the current (2014) snapshot of poverty around the world: 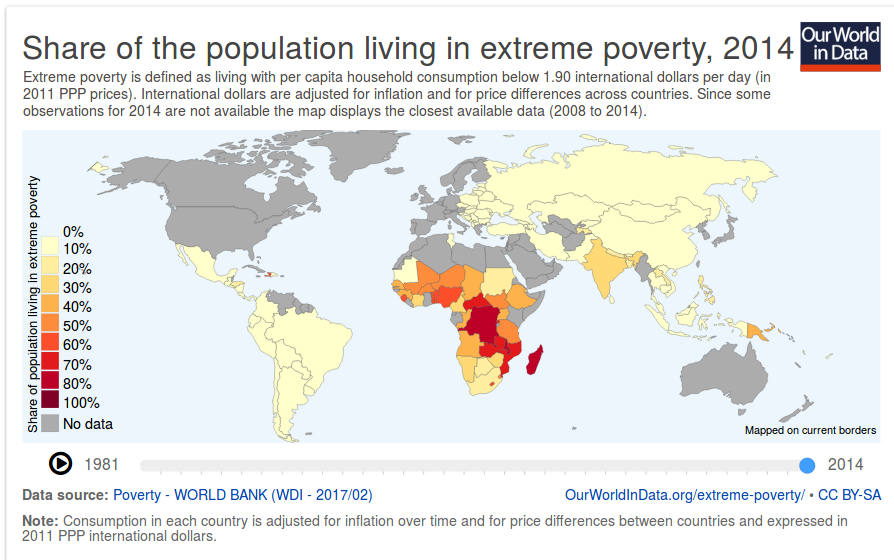 An amazing analysis of World Poverty, in simple slides, is here.

A careful analysis of existing evidence is found here.

I am unsure about rates in Europe or the United States. In any case one can debate about how poor "the poor" in Europe and the US really are compared to people that have to survive on a dollar a day (see e.g. Tim Haab on the difference between inequality and poverty). That is not to say that these people aren't suffering or hungry, but at least not as hungry as some people in developing countries.

Worldwide at least poverty (defined as the percentage of people surviving at $1.90 per day or less) has significantly fallen over the last decades, accounting to the Worldbank (see: here). However, according to the same data, in 2013 we still had 11% of the world's population in extreme poverty

Not the answer you're looking for? Browse other questions tagged macroeconomics labor-economics usa poverty or ask your own question.

12
$1.25 PPP per day poverty threshold - What precisely does it mean?
5
How much would it take to end global extreme poverty?
4
Have automation and technological advance been shown to have a positive impact on society and the economy or a negative one?
6
Is there a study of world poverty rates over time pre 1800?
1
Why are capital gains not counted in a poverty status calculation?
1
Why don't economists recommend voluntary childlessness to fight poverty?
1
What idea was proposed to remove global poverty?
2
Does development aid, negatively effect the development of developing countries?