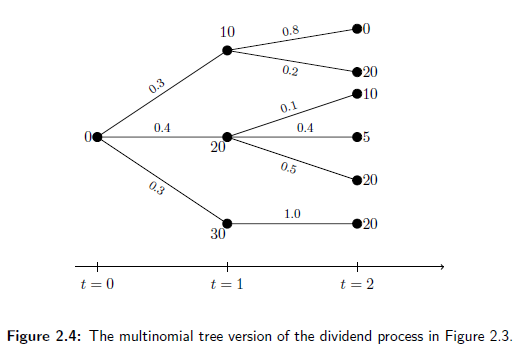 Mathematically, market completeness in continuous-time models does not follow from discrete-time heuristics.

In discrete-time, market completeness replies on only linear algebraic considerations. This does not translate to statements about continuous-time martingales and their representation as stochastic integrals.

The precisely statement that gives market completeness in continuous-time models is the Martingale Representation Theorem, which says every martingale with respect to a Brownian filtration can be represented as an Ito integral with respect to the Brownian generating that filtration.

All continuous-time models where market completeness hold are formulated with minimal Brownian filtrations. For example, in the Black-Scholes model price follows geometric Brownian motion $$ \frac{dP}{P} = \mu dt + \sigma dW. $$ Since $P$ is an exponential function of $W$, the filtration generated by $P$ is the same as that generated by $W$. All derivative payoffs are therefore adapted to the Brownian filtration. By Martingale Representation Theorem, they can be replicated/hedged/priced. Payoffs that are not measurable with respect to the Brownian filtration cannot be replicated/hedged/priced---market is not complete with respect to such claims.

8
Optimal consumption in Merton-like portfolio choice model with constant wage
4
Proving there exists no arbitrage opportunities given 3 states and 2 assets
1
Computing the continuous time survival rate
6
From Discrete to Continuous time: Total Differential
8
Log-normality assumption in consumption based asset pricing
3
Why is there consumption sharing in Arrow-debreu time-zero complete markets trading model?
4
Properties of Financial Markets in Real Life
2
Can anyone help me understand the Motrtensen-Pissarides model?